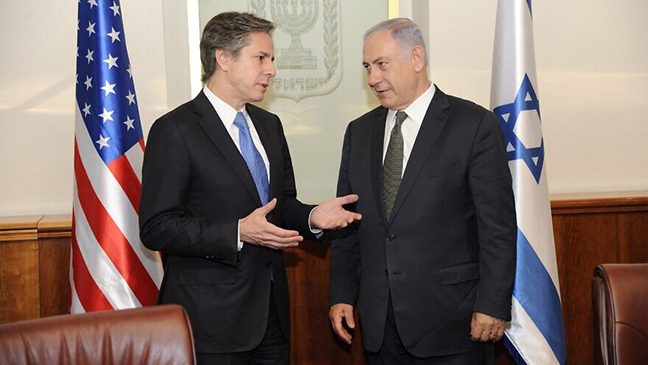 President-elect Joe Biden’s first major foreign policy appointments are being hailed as centrists and experts. None of them are known as radicals, ideologues or Israel-bashers. News outlets have made much of the fact that the stepson of a Holocaust survivor is one of the key appointments.

But a closer look at their backgrounds and associations raises disturbing questions about their views on Israel and the Arab-Israeli conflict.

Secretary of State designate Antony Blinken, National Intelligence director designate Avril Haines, and United Nations Ambassador designate Linda Thomas-Greenfield have an interesting professional association in common: they are among the cadre of leaders of a little-known advocacy group in Washington called Foreign Policy for America, which has a very disturbing perspective on Israel.

Foreign Policy for America, established in 2016, has two leadership bodies, both of which are quite small, indicating that their members are not just window dressing or names on a letterhead. The board of directors has just 12 members, one of whom is J Street president Jeremy Ben-Ami. It also has an advisory board, with just 20 members. Blinken, Haines, and Thomas-Greenfield are among them. Ben-Ami’s J Street is also based in Washington and is a Jewish pressure group that, judging by its actions, seems to have been created specifically, and almost exclusively, to lobby for an independent Palestinian state. The FPA’s executive director, Andrew Albertson, also has a long record of supporting J Street and he can be seen on YouTube as far back as 2011 heaping praise on the group.

Blinken and Ben-Ami are both alumni of the Clinton Administration, a fact that Blinken pointed out when he addressed the J Street annual conference in March 2012. In his speech Blinken showered compliments on J Street for having “emerged as an influential and constructive voice.”

FPA says on its website that its purpose is to “oppose xenophobia and military-first foreign policy.” It lists the 20 issues that are the group’s top concerns. One is the “Israeli-Palestinian Conflict.” That section of the website consists of a seven-paragraph summary of the causes and history of the conflict, with two large pull-out quotes from J Street publications and link to the J Street website, followed by tips on how to press Congress to be more sympathetic to the Palestinian Arabs.

This is on FPA’s “Israeli-Palestinian Conflict” issue page. Besides J Street the only other organization FPA suggests its readers review material of, in order to “Learn More,” is an extremist Israeli organization called B’Tselem. In 2018, the Simon Wiesenthal Center labeled B’Tselem a “campaigner against its own country.”

In the FPA’s version of history, the conflict began “in 1947, in the aftermath of the Second World War.” No mention of the Palestinian Arab pogroms of 1920, 1921, 1929, and 1936-1939. Of course not; mentioning that there was massive Palestinian Arab terrorism before Israel even existed would remind people that the Palestinian Arabs oppose Israel’s very existence.

FPA then briefly summarizes the various Arab-Israeli wars, without indicating that the Arabs were the aggressors. Wars just suddenly erupt for no apparent reason.

This “history” soon reaches the 1993 Oslo Accords. Guess why they haven’t produced peace? “The peace process has become complicated by growing settlements in the West Bank, continued Israeli military presence in the West Bank, and a blockade on Gaza,” according to FPA.

No suicide bombers. No machine-gunning of attendees at Passover seders. No lynchings by terrorists waving their bloody hands. No rockets fired into kindergartens. None of that affected the Oslo process. No, the word “terrorism” literally does not appear in the FPA’s entire history of the Arab-Israeli conflict.

This is the distorted view of the world to which the incoming secretary of state, National Intelligence director, and U.N. ambassador have contributed their names.

That’s not all. Intelligence director-to-be-Haines and three other members of the FPA Advisory Board — Robert Malley, Ned Price, and Donald Steinberg — signed the public letter earlier this year urging the Democratic Party to adopt more pro-Palestinian language in its platform.

Among other things, they recommended that the party adopt a full-throated moral equivalency, by expressing “opposition to violence, terrorism, and incitement from all sides.” Just like FPA, the signers of the letter were incapable of uttering the term “Palestinian terrorism.”

Not surprisingly, that letter is featured on the J Street website.

More broadly, FPA seems to be deeply uncomfortable with the war on terror. The website’s “Use of Military Force” section — another one of its 20 areas of focus — consists of a long attack on previous presidents for aggressively pursuing terrorists around the world.

FPA complains that anti-terror actions in “Afghanistan, Iraq, and Pakistan” have been “extraordinarily costly,” that is, too costly. They want to pass legislation to limit presidential authority in the war against terror, so they can reverse policies such as “detentions in Guantanamo Bay, Cuba, and training operations in (the) Philippines.”

That’s the worldview that the Biden foreign policy team is coming from: ignoring terrorism in Israel and trying to tie the hands of those who are fighting terrorism around the world.

There are, of course, additional reasons for concern about the team of the incoming administration. For example, the newly-announced Deputy Director of the Office of Legislative Affairs is Reema Dodin, a Palestinian-American activist, who has publicly justified Palestinian Arab suicide bombings as “the last resort of a desperate people.”

J Street’s Jeremy Ben-Ami is delighted that so many of his FPA colleagues will have major positions in the Biden administration. They are “exactly the type of leadership this country deserves,” he tweeted. Many Israelis, and many friends of Israel around the world, are probably not yet convinced.