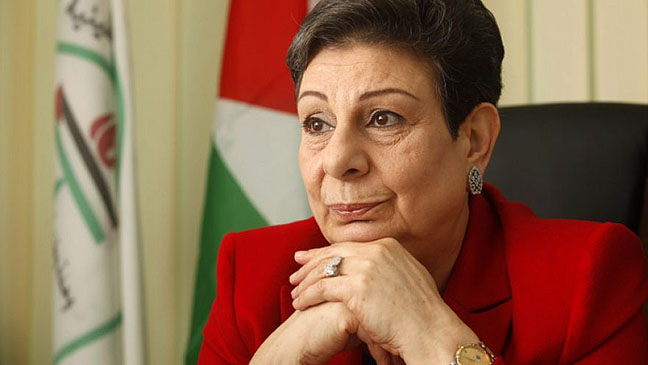 For many decades, the most seemingly palatable face of the Palestine Liberation Organization, the female Christian academic’s dulcet tones attempted to assuage the fears of many in the West about the PLO’s true intentions.

Frequently appearing on Western broadcasts, Ashrawi would come across as an ostensible voice of reason, leading a cause against Israeli “oppression” and “occupation.”

Her appearances and writings in Arabic, however, belied her silver tongue in English. Indeed, in her native tongue, she lambasted compromise with Israel, argued against any Israeli claims to Jerusalem and even blasted former U.S. President Barack Obama for his mention of Jewish history in the land of Israel. She said that talk of the Jews returning to their land was “Obama’s adoption of the discourse of extremist Zionist ideology.”

She has also demanded an end to the return of Jews to Israel through aliyah, a cornerstone of Zionism.

In other words, Ashrawi is a maximalist — an extremist — who cannot countenance Jewish peoplehood, history or national aspirations.

She is just another less obvious version of the violent Palestinian rejectionism that has ensured the continuation of the more than 100-year-old conflict that has seen so much bloodshed in the region.

She quit recently, because it obviously became clear to her that the jig is up. The constant stream of normalization agreements between Israel and a growing number of Arab and Muslim states has made the Palestinian issue increasingly irrelevant.

There is no Arab-Israeli conflict or Arab consensus, and Palestinian leaders are becoming frustrated that they no longer occupy center stage. The world is moving on, and so must the likes of Ashrawi, who — for so many years and on so many different planes — fought a conflict that doesn’t seem to exist anymore.

The result is that she is no longer invited to address Western campuses, the international media or global conferences. She is a relic of a bygone era, and at least she has the honesty to admit it.

According to media reports, the straw that broke the camel’s back and led to her resignation was her frustration over the Palestinian Authority’s recent decision to renew security coordination with Israel after months of deep freeze. But other events undoubtedly contributed to her sulk out the back door and into irrelevance.

She was witness to the beginning of the end of her struggle. The Arab-Israeli conflict is ending before her eyes. Realizing that Israel is not the enemy, the Arab world is no longer kowtowing to the Palestinians and their sense of entitlement.

Others, such as P.A. leader Mahmoud Abbas, 11 years Ashrawi’s senior, could never leave the stage as she did, because of the benefits of their position. 15 years into a four-year term as head of the P.A., Abbas sits comfortably in his salubrious fiefdom in Ramallah, fleecing his people and dashing their hopes for a better future.

“There is an erroneous assumption that the Palestinians are defeated, and they have to accept the fact of their defeat,” Ashrawi said recently, after the Abraham Accords between Israel and the United Arab Emirates were announced. “The Palestinians are willing, generation after generation, to continue their struggle.”

These are now known to be hollow words. Even the septuagenarian herself is not willing to continue the struggle. She has accepted the fact of her defeat.

The fact that her statement echoed that of the Israel Victory Project, formulated by her old sparring partner, Middle East Forum president Daniel Pipes, shows that she’s been paying attention more than she’d like to admit.

Ashrawi may be the first of her ilk to understand that Palestinian rejectionism is at an end, but hopefully she won’t be the last, thanks to the peace-making going on in Jerusalem, Abu Dhabi, Manama, Rabat, Riyadh and Jerusalem.

She has pointed the way for other Palestinian leaders to accept defeat and start building a better future for both Israelis and Palestinians. Let’s hope they follow her lead.

Nave Dromi is an Israeli commentator and director of the Middle East Forum’s Israel Office.