“Like family,” Bahrain and UAE activists ready to tell the world about great Israel experiences 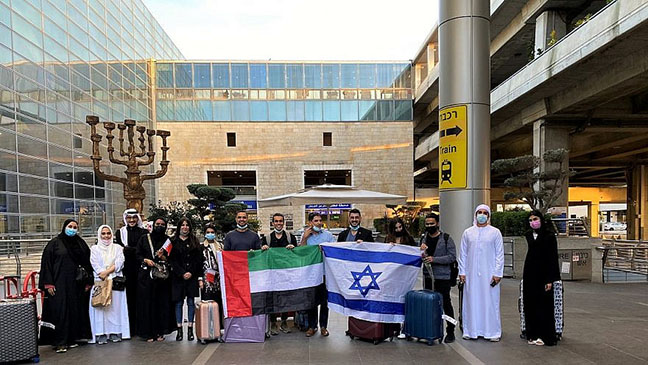 Israel welcomed a delegation of leaders and activists from Bahrain and the United Arab Emirates in December 2020. Credit: Courtesy.

(JNS) — Israel welcomed a delegation of leaders and activists from Bahrain and the United Arab Emirates earlier this month, following the success of the Abraham Accords that have normalized relations between Gulf and Muslim countries with Israel.

Under the auspices of a newly established organization named Sharaka (Arabic for “cooperation” or “partnership”), which “aims to lead social initiatives that bring Israel’s voice to strengthen familiarity with the State of Israel in the Arab world and create cooperation between young people in Israel and Arab states,” the group visited historical and cultural sites in Israel and meet with Israeli activists and leaders.

The partnership was born after Israelis visited the UAE and decided to jump-start a joint project that focuses on people-to-people encounters. Participating activists included professionals in academia, art, literature, politics, education, activism and the hospitality industry.

“We want a warm peace, where people will connect,” said Sharaka founder Amit Deri, who is also the founder and CEO of Reservists on Duty. “When leaders make a peace agreement, that’s one thing, but people-to-people connections are another. We want Emiratis to feel comfortable walking the streets of Tel Aviv in their traditional clothes, and Israelis want to feel comfortable walking the streets of Manama or Abu Dhabi with Israeli and Jewish symbols,” he told JNS.

As they lit candles at the Western Wall during Hanukkah, recalled Deri, “they felt like they were rock stars, with thousands cheering for them.”

Emirati delegation member Dr. Majid Al Sarrah, 37, told JNS that “it was a very spiritual and blessed moment, and we could feel the positivity all around us.”

At Yad Vashem, the group heard stories from the Holocaust in Arabic, met Israel’s President Reuven Rivlin and Minister of Foreign Affairs Gabi Ashkenazi, visited the Knesset, toured the Israel Museum, enjoyed hospitality at a Druze and Bedouin village, met with Israelis students and visited the Golan Heights border with Syria to learn about common threats Hezbollah and Iran.

The group shared meals with Israeli families of diverse religions and backgrounds, with Bahraini participant Fatema Al Harbi telling JNS that “at the table, we learned a lot about Israel and its different communities. We gained a lot of friends from this.”

Throughout the visit, the activists took their experiences to Twitter to echo the message of coexistence, with some of their tweets reaching 1.5 million viewers, and some also sparking criticism among anti-Israel and anti-normalization voices online.

“I am more confident when I talk about Israel in the media and share my experience of what I saw from Israelis,” said Al Harbi, who maintained that after sharing her experience through social media, “many are now interested in visiting.”

The visit represented many firsts, according to Deri, as the group was the first social delegation to arrive from the UAE and Bahrain, the first Bahrainis and Emirates to visit Knesset, and the first non-Israelis to enter Israel for a private tour in the last five months.

Al Sarrah, who is a public-policy expert, consultant and former teacher at the American University of Sharjah, maintained that the cultural exchange and authentic dialogue “helps to build strong ties for the current and future generations to achieve coexistence and prosperity.”

Though he knew ahead of the visit that “Israel is a very advanced state,” he learned during the exchange that it’s also “a very beautiful country and a land of coexistence that accepts others.”

“We have a duty to reflect the real image of positivity we experienced in Israel, which is against the misleading media and their false content about Israel,” emphasized Al Sarrah, who expressed his gratitude to Sharaka and “to all of the Israeli people for their hospitality and to make us feel like family members at home.”

Al Harbi, 29, from Riffa City, expressed her excitement in “being part of making history in the Middle East. I think a lot will change in the near future.”

A novelist and cultural activist working in the field of education, she stressed the importance of exchanging ideas and best practices with those who are considered “unknown” to the other, calling the experiencing an “eye-opener.”

Before the exchange, she told JNS, she only knew about Israel as “a place of 24/7 war” from the “one-sided news,” later coming to the conclusion that it was “totally different in real life.”

“We were surprised by how welcoming the Israelis were as strangers stopped us constantly to say hi and welcome us, and even invite us to their homes,” she said. “We learned that you can’t believe the news without experiencing the country yourself.”

Abdallah Ali, 28, who lives in Dubai but is originally from Egypt, was similarly pleased that “Israelis were so happy to see people coming from the Arab world to tour Israel,” as he was taught that Israel was an unsafe destination for Arabs and that “people will look at you as a traitor.”

The hospitality professional expressed the importance of the exchange “to support peace between people and change the old ideas we had.”

Now considering himself an “ambassador for Israel to the world,” Ali intends to “correct the old thoughts that most people have about Israel” and “support the peace that our leaders are creating for a better life for us, [preventing] hate and wars.”

“I am planning for my next trip to Israel soon,” he told JNS.

The joint partnership intends to expand to Morocco, with Deri fielding “hundreds of messages” from people in the Arab world and Gulf who want to participate in the exchange.