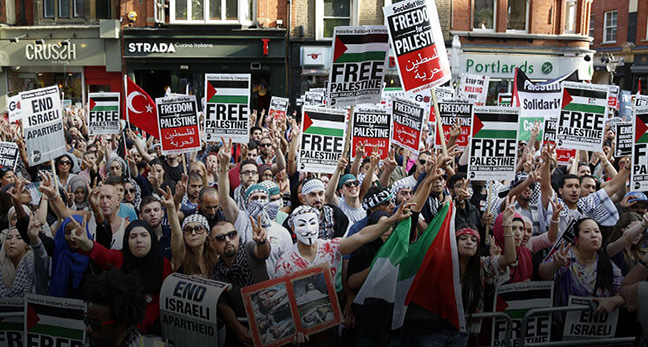 (HonestReporting.com) — On the last day of 2020, Israel and the United States stood alone, not for the first time, by voting against the United Nation’s coming year’s budget. According to Washington’s ambassador to the UN, Kelly Craft, the budget for this year reflected “an accommodation that extends a shameful legacy of hate, antisemitism, and anti-Israel bias.”

Craft was explicitly referring to the UN’s plans to organize an official event commemorating the 20th anniversary of the World Conference Against Racism. The highly controversial 2001 conference, also known as the Durban Conference, or Durban I, featured some of the vilest antisemitism since World War II.

In the eyes of many, it kicked off the campaign to exploit the language of anti-racism and human rights to demonize and isolate the world’s only Jewish State. The impact of this so-called ‘Durban Strategy’ is felt to this day: experts trace the roots of the ongoing Boycott, Divestment and Sanctions (BDS) movement back to the 2001 gathering.

In 1997, the UN General Assembly voted to hold an international governmental conference on combating racism. The meeting was decided to be held in Durban, South Africa, between August 31 and September 7, 2001. The UN resolution also called on non-governmental organizations to actively participate in the conference and its preparations. Together with several member states of the Organisation of Islamic Cooperation, these groups ended up hijacking the event to further their anti-Israel and antisemitic agenda.

A massive three-day gathering of NGOs took place before the formal conference, some 500 meters away from the convention center. Approximately 7,000 delegates from 1,500 NGOs participated in the forum. While not officially part of the summit, UN High Commissioner Mary Robinson opened the NGO Forum by saying that she considered it “an integral part” of the World Conference. The NGOs subsequently succeeded to overshadow the formal conference by generating a huge amount of media attention.

Chilling first-hand reports describe how Jewish and Israeli participants were harassed from the very beginning of the NGO Forum on August 28. While the NGO representatives were waiting in line for registration, the Arab Lawyers Union distributed brochures depicting Jews as hook-nosed sadists obsessed with money. In reply to a complaint by UN Watch, the organizing committee called the antisemitic pamphlet “political expression.”

In just three days, the Jewish caucus witnessed countless other instances of antisemitism. On the convention grounds, hundreds of flyers were distributed picturing Adolf Hitler and the text, “What if I had won? The good thing — there would be no Israel.” In the exhibition tent, participants could purchase a copy of ‘The Protocols of the Elders of Zion,’ the notorious antisemitic forgery describing a Jewish plot to achieve world domination.

Even though the conference was supposed to give a voice to the victims of racism and discrimination, the sole panel on antisemitism was disrupted by an angry mob of protestors shouting slogans like “You are killers!” and “You don’t belong to the human race!” An official session on Holocaust revisionism had to be canceled due to security concerns. When the Jewish groups tried to inform the press of their plight on August 30, a shouting mob of anti-Israel protestors interrupted the briefing.

“I have never experienced such virulent antisemitism,” a shell-shocked Dutch Jewish delegate said, comparing the atmosphere in the South African coastal city to 1930’s Germany. Even at the parallel youth summit, many participants were in constant fear, as one Jewish student described in her diary from the conference.

“We don’t even go to the bar or the bathroom alone anymore,” Jewish student leader Joelle Fiss wrote on the third day of the proceedings. “Certain members of the group are no longer wearing their badges. Others have changed their kippah for a cap.”

Durban Conference: ‘Most Sickening Display of Hate Since the Nazi Period’

The late Tom Lantos, a Holocaust survivor and longtime U.S. Congressman, attended ‘Durban’ as a member of the American delegation. “For me, having experienced the horrors of the Holocaust first hand, this was the most sickening and unabashed display of hate for Jews I had seen since the Nazi period,” he asserted.

The NGO Forum ended on September 2 with a declaration that accused Israel of being a racist, apartheid state, committing “crimes against humanity,” “ethnic cleansing,” and “genocide” against Palestinians. The document also called for a policy of “complete and total isolation of Israel” and the “reinstitution of the UN resolution equating Zionism with racism.”

All other caucuses voted to delete from the declaration the few suggestions made by Jewish NGOs, prompting Jewish participants to walk out. In the final version of the document, the definition of antisemitism was twisted to also include discrimination against Muslims and Palestinians.

Something similar happened at the youth summit, whose declaration contained a reference to antisemitism that was conspicuously placed in a paragraph about discrimination against Muslims. A proposal to encourage a peaceful solution to the Arab-Israeli conflict was rejected by youth groups. Instead, they affirmed that Palestinians have the right to defend themselves “by any means.”

In the drafting committees for the official government declaration, a dialogue ensued on the need for references to antisemitism and the Holocaust. Syria, which referred to antisemitism as a “curious and bizarre concept,” objected, while Iran complained that this would constitute “imbalance and favoritism.” References to Jew-hatred were also unacceptable to states like Egypt, Cuba, China, Sudan, Iraq, Chile, and Jamaica.

Simultaneously, it became clear that the official declaration would also include harsh language attacking Israel – and only Israel. When efforts to reach a compromise failed, both the United States and Israel recalled their delegations on September 3. The conference voted to add additional anti-Israel paragraphs in the remaining days. All references to the Holocaust were deleted from the program of action.

Human rights lawyer Anne Bayefsky would note a year later that, “Durban gave us antisemitism in the name of fighting racism. Exclusion and isolation of the Jewish State in the name of multilateralism. Durban provides a platform for hate and violence, which ought to be deactivated down before it corrupts the entire anti-racism agenda of the United Nations.”

Attempts by the United Nations to follow up on the first Durban conference have overwhelmingly failed. The most significant Western countries boycotted the 2009 Durban Review Conference in Geneva, fearing a repeat of the 2001 debacle. Other countries sent low-level delegations to the event, which started with a speech by Iranian President Mahmoud Ahmadinejad. In his official remarks, he referred to the Holocaust as an “ambiguous and dubious question.” Durban III, held on the 10th anniversary of the controversial summit, was similarly boycotted.

Many expect this year’s Durban IV conference to fail as well. The Durban strategy, however, has seemingly proven far more successful.

Using the language of anti-racism and human rights, NGOs routinely spread libels about Israel. As founder and director of NGO Monitor Gerald Steinberg and author Naftali Balanson put it: “This Durban strategy, led by NGOs, is behind the BDS (Boycott, Divestment and Sanctions) efforts, which its proponents justify using the rhetoric of human rights, to demonize and delegitimize Israel.”

This is the hateful legacy of Durban I. When confronted with elements of the BDS campaign, it is important not to forget the antisemitic conference from which they in part originated.