Why Biden’s concessions to the Palestinians don’t help them, but hurt them 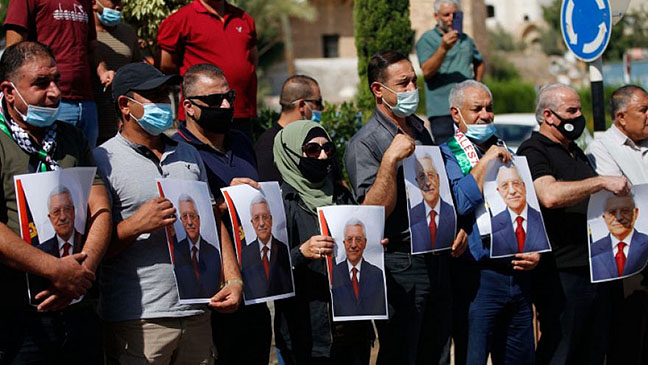 Palestinians hold photo printouts during a rally in support of Palestinian Authority leader Mahmoud Abbas in the West Bank town of Tubas on Sept. 27, 2020. Photo by Nasser Ishtayeh/Flash90.

(JNS) — The Biden administration’s first Middle East decisions make clear what was always obvious about the new president’s intentions: the foreign-policy establishment is back in charge in Washington. That’s led to a flurry of moves about U.S. policy towards the Palestinians that, predictably, have a lot of pro-Israel activists up in arms. However, the people who should really be upset are not those most concerned about the Jewish state; rather, it should be those who are worried about the plight of the Palestinians.

By that, I don’t refer to leading Israel-bashers in politics or members of the media who give credence to lies like the blood libel that Israel is denying the COVID-19 vaccine to Palestinians. I’m not even talking about supporters of the BDS movement whose aim is to destroy Israel and who are one of the leading practitioners of anti-Semitism in America. Nor am I discussing those who engage in anti-Israel propaganda under the guise of advocacy for human rights.

When I say those who actually care about the Palestinians, I’m focusing on those who understand that Palestinian leaders — the corrupt “moderates” of Fatah who run the Palestinian Authority, as well as the Hamas terrorists who operate the independent Palestinian state in all but name in Gaza — have betrayed them for generations. It also applies to those who point out that so many of their problems stem from the U.N. Relief Works Agency — a body that is dedicated to keeping millions of people stuck in limbo as “refugees” rather than help them find new homes or better lives.

The point being that for those who are just fine using Palestinians as props in a pointless hundred years war against Zionism, then a shift back to the policies embraced by the foreign-policy establishment is great news.

As expected, the Biden administration announced this week that it is reversing some of the key changes made in American Middle East policy by former President Donald Trump. Among them is a resumption of diplomatic relations with the P.A., as well as aid to the Palestinians. That news — made in a speech by Richard Mills, the acting U.S. ambassador to the United Nations — was cheered by the Fatah government led by Mahmoud Abbas. And it was accompanied by a promise to rededicate American policy to the goal of a two-state solution.

The United States won’t be moving its embassy back to Tel Aviv from Jerusalem. But the Trump “Peace to Prosperity” plan is off the table. It’s also likely that at some point, the State Department will also reverse the Trump-era ruling that correctly stated that Jewish communities in the West Bank are not illegal.

That’s all good news for those who hope that President Joe Biden will pressure Israel to make unilateral concessions in order to tempt the Palestinians back to the negotiating table. That’s despite the fact that no one in Washington, Jerusalem or Ramallah thinks Abbas is interested in negotiating an end to the conflict, no matter what the Israelis offered him.

Biden’s choices show that he has learned nothing from the mistakes made during the Clinton and Obama administrations. Reports that a determined appeaser like Robert Malley will take on the Iran portfolio is troubling. So is the fact that a former BDS activist has been tapped for a top intelligence post.

Just as bad is the news that he is halting arms sales to Saudi Arabia and the United Arab Emirates. That means that an element of the normalization deal that the UAE struck with Israel is being tossed out by a Biden administration that regards the Abraham Accords as a distraction from an effort to satisfy the Palestinians.

The shift from historic levels of support under Trump to the traditional relationship in which the United States is as eager to strong-arm Israel on the Palestinians and Iran is troubling. Yet Biden does not appear to have had any conversations with leaders in the Middle East. With so much else on his plate, another futile quest for two states is the last thing he needs, and the president may know that.

Why then should we care about the gestures toward the P.A.?

These moves are a terrible idea not so much because they weaken Israel, but because they send the signal that the United States has gone back to tolerating the exploitation of the Palestinian people.

Trump sought to hold Abbas accountable for his financial support for terrorism and his ongoing refusal to negotiate peace with Israel. That was precisely the kind of tough love the establishment was always preaching should be directed to the Jewish state in spite of Israel’s willingness to negotiate and to even make concessions for peace. Pressuring Israel did more to encourage Palestinian intransigence than anything else. Pressuring, rather than appeasing, the Palestinians is the only path to peace.

Resuming funding to UNRWA sounds like a humanitarian gesture that will help Palestinians who were left in need by a supposedly mean-spirited Trump. But the truth is just the opposite. It is UNRWA that perpetuates the suffering of the Palestinians. The only way to solve the problem of the only population of refugees — or rather, the descendants of refugees — is to dismantle the institution that has helped keep them homeless.

Equally ill-considered is the resumption of aid to the P.A.

This will be tricky for Biden since U.S. law prohibits aid to the P.A. as long as it pays salaries and pensions to terrorists and their families. So what we will see is some sleight of hand move by Abbas’s corrupt government that will claim the money spent on terror is for welfare payments or from some other budget line. Either way, it will be a lie and much to Biden’s discredit if he accepts it.

The problem is not just the idea of the administration flouting the law or its willingness to appease Abbas, who has vowed never to give up the payments. It’s that the Palestinians will never give up their support for terror as long as the international community tolerates it.

Israel will survive, as it did from 2009 to 2017, with even a hostile American administration, even as it is to be hoped that Biden won’t repeat Obama’s mistakes or make worse ones.

But a U.S. government that goes back to tolerating Fatah and Hamas misrule, and U.N. support for the war on Israel dooms the Palestinian people to suffering more than anything else. As regional support for the Abraham Accords proved, the rest of the Arab world has given up on them and has decided not to let their security and economic interests be held hostage to a Palestinian movement incapable of making peace.

If Biden and his team of establishment know-it-alls actually cared about the Palestinians, they’d be doubling down on Trump’s policies rather than reversing them.

Four years of more of the same policies that failed prior to 2017 will be applauded by those who hate Israel or profit from Palestinian corruption. The “experts” who think their misguided foreign-policy theories are more important than reality will also be comforted. But those who view the plight of a people who have been led into a forever war they cannot win with sympathy must regard Biden’s moves with dismay.