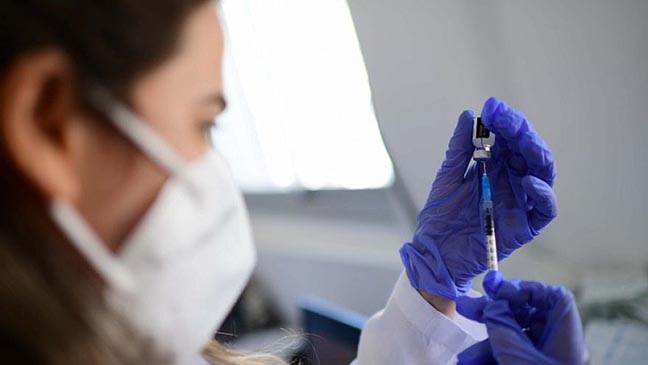 A COVID-19 vaccine injection is prepared at a vaccination center in South Tel Aviv, Feb 14, 2021. Photo by Tomer Neuberg/Flash90.

(CAMERA) — The Washington Post can’t seem to get Israel’s COVID-19 vaccination policy right. Or perhaps it just doesn’t want to. Time and again, the newspaper has offered incomplete and misleading coverage on the subject.

As CAMERA has noted, many news outlets have tried to posit that it is Israel’s responsibility to provide Palestinians with COVID-19 vaccinations. But the Oslo Accords are clear. Annex III, Article 17 of the 1995 Interim Accords stipulate:

“Powers and responsibilities in the sphere of Health in the West Bank and the Gaza Strip will be transferred to the Palestinian side, including the health insurance system.”

Suffice to say, there is nothing ambiguous about these passages, which clearly state that the Palestinian Authority is responsible for vaccinating Palestinians in the West Bank and the Gaza Strip. Indeed, as the Jerusalem Post’s Lahav Harkov has documented: “The PA has been keeping its end of the bargain on that front for nearly 30 years, something that news outlets whose reporters constantly quote the Hamas-run Gaza Health Ministry… surely already know.”

But knowledge and facts are one thing. Finding an excuse to blame the Jewish state is another. And it is clear that many reporters are foregoing the former in order to propagate a narrative that is underpinned by twin bigotries.

The first is the idea, implicit in the misleading reports on “Israel not vaccinating Palestinians,” that Palestinians are without independent agency — that they are helpless. In fact, as noted above, the PA has been tasked with healthcare, including vaccinations for decades. Yet, when it comes to COVID-19 vaccines, Palestinian leaders have had other priorities. As Palestinian Media Watch noted in a Feb. 22, 2021 report, the PA paid at least $159 million USD to terrorists as part of its “pay to slay” campaign that offers financial incentives to Palestinians who attack Jews. As PMW pointed out, “in a year fraught with global financial instability” that money could have, of course, gone toward COVID-19 vaccines. But Palestinian leaders themselves decided otherwise.

The second bigoted notion in mainstream media reports on Israel and COVID-19 vaccines is the idea that the Jewish state is discriminatory and “only wants to help Jews, while non-Jews suffer.” This idea was encapsulated in recent comments on NBC’s Saturday Night Live where comedian Michael Che “joked” that “Israel is reporting that they vaccinated half of their population. And I’m going to guess that it’s the Jewish half.”

In fact, as Harkov noted, “there isn’t some kind of ethno-religious discrimination.” Indeed, “Israel’s vaccine operation has run in predominantly Arab areas in Israel from day one.” Put simply: Israel is vaccinating all of its citizens, regardless of their ethnicity or religion. Further, as the Jerusalem Post’s Seth Frantzman noted on Jan. 4, 2021, “Israel is vaccinating more Palestinians than any country on earth.”

Writing in the Jewish Chronicle, Frantzman pointed out that “Israel is providing vaccines to everyone in its health network, including Palestinian residents of East Jerusalem who have Israeli health care.” These are not Israeli citizens, but rather residents whose healthcare is under Israel’s purview per the Oslo Accords. Those who are 60 years or older, or who have chronic conditions, can be vaccinated. Further, Palestinians who are imprisoned in Israel have also received the vaccine.

Additionally, as CAMERA has long documented, Israel has been providing COVID-19 aid in the form of equipment, training and cooperation to the PA — all while Palestinian leaders have been doling out money to murder Jews.

The Post, however, continues to omit these crucial details. A Feb. 23, 2021 report on the Che controversy meekly observed that “Israeli officials have cited the Oslo Accords in arguing that the Palestinian Authority and Hamas are responsible for their own health systems.” Well, yes. Israeli officials have “cited the Oslo Accords” — because that is what the Accords say, a salient fact that the Post glosses over, instead preferring to portray the story as one of dueling narratives. Nor did the newspaper inform readers that PA officials have previously publicly refused COVID-19 vaccines — all while PA leaders secretly requested, and received, vaccines for themselves.

Another Washington Post report by Jerusalem bureau chief Steve Hendrix and correspondent Shira Rubin also omitted these key details (“First coronavirus vaccines arrive in Gaza Strip following blockage by Israel”). The Feb. 17 dispatch asserted that “human rights groups and Palestinian activists have argued that Israel has both a legal and moral obligation” to provide the vaccines, but “Israelis have countered that the 30-year Oslo accords… make the Palestinian Authority and Hamas responsible for their own health systems.” Once again, a fact is presented as merely an Israeli claim.

The very wording illustrates that, when it comes to Israel and COVID-19, narrative dominates at the Washington Post. More proof can be found in what the newspaper chooses not to cover.

“Israeli officials reportedly sent a request last week to the Palestinian Authority and the Jerusalem Muslim Waqf asking that the Israeli government be allowed to open a coronavirus vaccination station in the Temple Mount area, but the request was rejected. The station was meant to vaccinate mainly Palestinian worshipers visiting the area.”

Israel sent the request after “the repeated publication of photos in which over 10,000 people can be seen praying in the mosque area each Friday, in disregard of COVID-19 protocols.” But, as TOI noted, PA President Abbas refused Israel’s request to vaccinate these Palestinians, claiming that doing so would give the Israelis a presence in the al-Aqsa Mosque area.

It seems that, just as the Washington Post puts an anti-Israel narrative before facts, Palestinian leadership puts politics before public health — the exact charge that reporters and comedians alike have laid at the Jewish state’s doorstep.

Sean Durns is a Senior Research Analyst for the Washington D.C. office of the Committee for Accuracy in Middle East Reporting and Analysis..