Israel still can’t make up its mind about Netanyahu 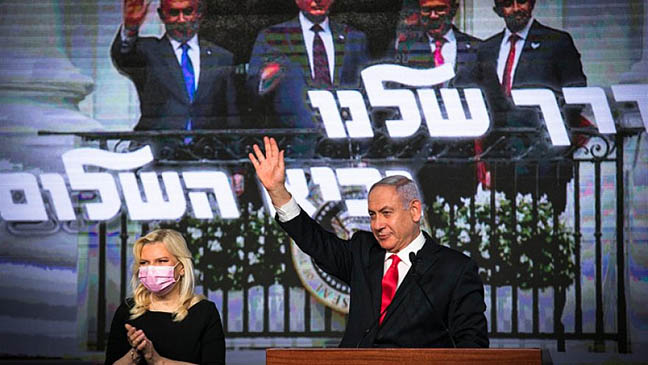 (JNS) — When the first exit polls were published, it seemed as if the long stalemate had been ended. Within a couple of hours, however, the polls had been revised, and by the end of a long night and morning of counting, it turned out that the deadlock between those who wish to keep Benjamin Netanyahu as prime minister and those who want to get rid of him hadn’t been broken.

With 88.5 percent of the vote counted (and with approximately half a million absentee votes that could alter the electoral math still left to be tabulated), the parties supporting Netanyahu, plus one likely coalition partner, had fallen two seats short of the 61 Knesset seats needed to form a new government. By the same token, the disparate group of parties that agree on very little, but which are all pledged to oust the prime minister, were similarly short of a clear path to an alternative government.

This fourth consecutive election stalemate in two years is a discouraging outcome for the Jewish state. It’s not just an annoying waste of time. More than that, it has been estimated that the cost of holding these four votes amounted to $4.24 billion — a staggering sum for a small country that, like the rest of the world, is dealing with the economic catastrophe caused by the ongoing coronavirus pandemic. Aside from the not-inconsiderable expenses involved in staging the contest, election days are legal holidays in Israel. That costs company holiday pay, as well as a loss of productivity and sales, even though some businesses, like restaurants, benefit from people having the day off.

Then there is the plain fact that the lack of a national budget for 2020 — let alone 2021 — is also a blow to stability and the country’s economic well-being.

There is a national consensus that the standoff has been something of a disgrace since, among other things, the frequency of elections means that Israel has now surpassed Italy as the home of the most unstable democracy in the world. And yet, the one person who hasn’t been hurt by it is Netanyahu. The failure to form a stable government has served him fairly well since it enables him to govern without actually winning an election. Even the lack of a budget has made it easier for him since he hasn’t been hampered by the financial negotiations that would have undermined his agenda.

Indeed, in the course of the last year, Netanyahu hasn’t just managed to stay afloat. Since Israel was last forced to the polls, the prime minister had what historians may ultimately say were his two greatest accomplishments: the signing of the Abraham Accords and the successful effort to get Israelis vaccinated against COVID-19, enabling it to be the first of nations to essentially emerge from the yearlong pandemic crisis.

Any leader with two such impressive achievements to his credit might have expected to be easily re-elected. But the election results speak volumes about both his strengths and his weaknesses. That’s because it could also be said that no prime minister who was facing trial for three corruption charges and who had worn out his welcome with both the public and political colleagues after 12 consecutive years in office could reasonably presume to emerge from an election as the head of the largest party and as the only person with a chance to form a government, as is also the case with Netanyahu.

His able statesmanship and skillful governance — not to mention a national consensus behind his core positions on issues that used to divide Israel over policy towards the Palestinians, territory and settlements — have made him something of an institution. It’s no wonder that polls show that most Israelis (including many who don’t vote for him) think that he’s the most qualified person to hold the top job.

Still, his constant scheming, untrustworthiness in political negotiations and the sense of entitlement that go with having stayed in office so long with no thought of grooming a successor, let alone stepping aside for the next generation, has also fueled rage at Netanyahu on the part of a broad cross-section of the Israeli public. It may be created by a mix of partisanship and ideology (many in the “anybody but Bibi” camp would be similarly determined to oppose any Likud leader or non-leftist), but it is nonetheless real. His followers cannot imagine Israel being led by anyone else. And yet the fact that so many Israelis seem focused on nothing but the quest to topple him has further embittered the country’s political discourse.

Can Netanyahu find a way out of the corner into which the Israeli public has painted itself?

Talk of defectors from other parties is, as was the case last year, mooted by his supporters, but that seems even less likely this time around. Another possibility of a solution is both a laudable development as well as a potential case of staggering hypocrisy.

When the four disparate Arab factions ran together as a single party last year, they won 15 seats as the Joint Arab List. When Blue and White leader Benny Gantz spoke of his willingness to deal with that coalition of anti-Zionists — many of whom sympathize with terrorists — the Likud and others blasted the idea as something that would compromise the nation’s security.

The Joint List split when Mansour Abbas, leader of the Ra’am Party that advocates the conversion of Israel into an Islamist Palestinian state, pointed out something that was quite true. Israeli Arabs have been badly served by their politicians. Many of them are corrupt and have spent their time working harder to support Palestinian efforts to undermine Israel than on trying to assist their constituents. Abbas (no relation to the Palestinian Authority leader Mahmoud Abbas) suggested that it was time for them to stop grandstanding in order to help allies in Ramallah and Gaza, and start doing deals with the Zionist parties in order to serve their people better.

Assuming that the current results stand up after all the votes are counted, that led to a loss of four seats for the Arabs after the Joint List won six seats and Ra’am five.

As he promised during the campaign, however, Abbas says that he is open to supporting either side of the Israeli political divide in order to advance the interests of Israeli Arabs. That opens up the possibility that one of the non-Jewish parties would become part of a government, even if it meant supporting it from outside the coalition.

If Ra’am enables Netanyahu and the Likud to govern in this fashion, the prime minister and his supporters would be open to charges of staggering hypocrisy. Then again, it would also give the lie to the canard that Israel is an “apartheid state.”

It would also illustrate just how far the Abraham Accords and the other normalization deals between Israel, and Arab and Muslim states, have helped erode support for the century-long war on Zionism. Friendly relations with the United Arab Emirates and Bahrain are a signal to Arab voters that it’s in their interests to stop acting like auxiliaries of Palestinian terror groups.

This scenario may not happen—not the least because many of Netanyahu’s supporters won’t tolerate sitting in a government whose existence depends on the votes of those who don’t really want it to exist. It also doesn’t alter the fact that half of the country will never rest until he is finally defeated. Nor does it erase the way the prime minister’s sense of indispensability and double-dealing has fatally divided an Israeli right that might otherwise be firmly in control under almost any other leader. The mere fact that the option of a deal with an Arab party can be realistically discussed is also a tribute to how much Netanyahu has changed Israel and the Middle East.