Israeli observers: A lot of Iranian nuclear work in Natanz went down the drain 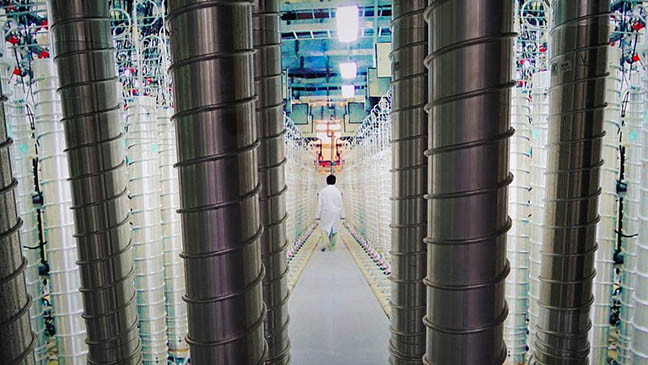 A view of nuclear centrifuges at the Iran nuclear energy exhibition at the Islamic Revolution & Holy Defense Museum in 2018. Credit: Inspired by Maps/Shutterstock

(JNS) — Threats by Iran to retaliate against what it said was an Israeli sabotage attack on its Natanz nuclear site on April 11 and the reported attack on an Iranian command ship in the Red Sea on April 6 should be taken seriously, observers in Israel say, but they also indicate the distress that the Iranian regime is feeling as it absorbs one blow after another.

Lt. Col. (ret.) Michael Segall, an expert on strategic issues with a focus on Iran, terrorism and the Middle East, and a senior analyst at the Jerusalem Center for Public Affairs, told JNS on April 12 that negotiations between the United States and Iran to return the Islamic Republic to the nuclear agreement is the trigger for many recent events.

“This isn’t the first time that centrifuges in Natanz have crashed in one way or another. I’m not sure how many cascades [which hold uranium enrichment centrifuges in place] were destroyed there, and it is not clear what happened, but when a cascade breaks, this represents years of work that go down the drain,” said Segall.

The next day, Natanz experienced a mysterious power blackout following a reported blast. The New York Times reported on April 12 that the incident set back production at the site for at least nine months.

“The IR-9 centrifuges really cut down the enrichment time,” said Segall. “It reduces what takes days to do into hours. A power cut without back-up power can cause serious damage if the cascades leave their position.”

‘The Iranian regime has been exposed’

While some have claimed that the latest incident can strengthen America’s hand in talks by denting Iran’s threat to enrich uranium to the 20 percent level in greater quantities and in less time, Segall was skeptical of that argument.

Such incidents place the regime in a problem. Segall said social-media messages by Iranians have begun mocking the regime for its claims of being the strongest military in the region with a large missile program, but is unable to defend its most critical assets — whether they are the Natanz nuclear site, nuclear scientist Mohsen Fakhrizadeh or the late commander of the Quds Force Maj. Gen. Qassem Soleimani.

“The regime has been exposed,” he said.

“As it continues to absorb attacks, there is a growing erosion in its perception by the Iranian people, and certainly, by the Iranian diaspora. Both of [these groups] were also highly critical of Iran’s agreement with China, viewing it as a Chinese takeover of Iran’s gas and oil infrastructure,” he added.

But the Islamic Republic already has several previous reasons to take “revenge,” noted Segall, including the reported assassination of Fakhrizadeh last November, or the January 2020 U.S. drone-strike assassination of Soleimani, seen by many as the second most powerful man in Iran after Supreme Leader Ayatollah Ali Khamenei.

So far, there have been no “mega responses” by Iran to past incidents, but rather “more of the same,” said Segall.

“They want to respond. They wanted to retaliate after Soleimani and after Fakhrizadeh. They don’t need to wait for more reasons. They’re trying all of the time. If they can, they’ll do it,” he said.

On April 12, the Shin Bet and Mossad intelligence agencies announced in a joint statement that Iranian intelligence elements were attempting to lure Israelis on social-media sites to meetings abroad that could lead to kidnappings or attacks against them.

The Israeli intelligence agencies said the pattern was one also used by Iran against dissidents in Europe.

The bottom line for Iranians: ‘All sanctions to be removed’

Meanwhile, at the nuclear talks in Vienna, Washington has so far displayed a fairly determined stance in talks. The American delegation is headed by Robert Malley, the U.S. special envoy to Iran. But Iran, for its part, has been “highly determined” in its insistence that all sanctions be lifted before it reverses its nuclear steps.

Segall said he observed a well-organized division of labor in the Iranian government, with the foreign ministry reflecting the firm position of Khamenei, and President Hassan Rouhani occasionally displaying a more optimistic tone regarding the possible outcome of negotiations.

“The bottom line of all of the Iranians involved in this is that all sanctions have to be removed, even those linked to non-nuclear issues such as terrorism and human rights,” said Segall.

“Verification is very important for the Iranian perspective — first, Iran wants to verify that sanctions have been lifted, and only then would it reverse its violations of the nuclear deal, including the installation of IR-9 advanced centrifuges.”

Segall stressed in that six weeks, Iran is scheduled to cease sharing videotape footage of its nuclear sites with the International Atomic Energy Agency watchdog — a move that comes after Iran ended live video feeds as part of its ever-escalating nuclear steps to place pressure in negotiations.

Segall said he remains disturbed by the unknown aspects of Iran’s nuclear program.

“They have proven in the past that the nuclear program is spread out in hidden sites,” said Segall, raising the question of whether there are additional sites that are enriching uranium, rather than Natanz that is in the spotlight.

“I think the Iranians will continue in their efforts, and they will seek to put a wedge between Israel, the United States and Europe. They will say that they want to reach an agreement, that they came to Vienna despite the pandemic restrictions, and that the U.S., Europe, China and Russia want a deal while Israel does not,” he assessed.

‘A change in strategy has occurred’

Brig. Gen. (ret.) Shlomo Brom, a senior research associate at the Tel Aviv-based Institute for National Security Studies, said that Israel’s reported campaign against Iran can be divided into two phases: before and after the American elections.

“The sea campaign started long before the U.S. elections,” Brom, who served as former director of the Strategic Planning Division in the Planning Branch of the General Staff, told JNS. “The Iranian responses were expected. They usually retaliate even if their responses come late and even if the responses are small in proportion to the incidents because of their weakness. The sea campaign is all part of the struggle against Hezbollah and the Iranian presence in Syria.”

The campaign against Iran’s nuclear program, however, is a separate issue, even though it is related to the regional shadow war, and even though both campaigns can influence one another, he stated.

“After the U.S. elections, a change in the American strategy occurred, and Israel responded to this. A new element has been added. This presents an open question: To what extent were the reported actions by Israel since the U.S. elections designed to undermine U.S. plans to negotiate with Iran on a return to the nuclear program, in addition to the ongoing campaign against Iran?” he asked.

The reported sabotage attack in Natanz — whether it was conducted via cyber warfare or an explosives attack — is part of the long-standing campaign against Iran’s nuclear program, he said, a campaign that reportedly includes the assassination of Fakhrizadeh and the July blast at Natanz. “But the latest incident happened after a change of U.S. policy, so the question is: Was this also part of an effort to trip up American plans?”

U.S. President Joe Biden, for his part, is not speaking publicly on the latest Iran-related incidents, making it difficult to know his position, said Brom.

“Based on my knowledge of this administration, I tend to believe that the more dominant approach is opposition to Israeli activities” against Iran at this stage, said Brom, before adding “whether this is the view that is in control, I can’t determine.”