Debunking four media-fueled myths about the violence in Jerusalem 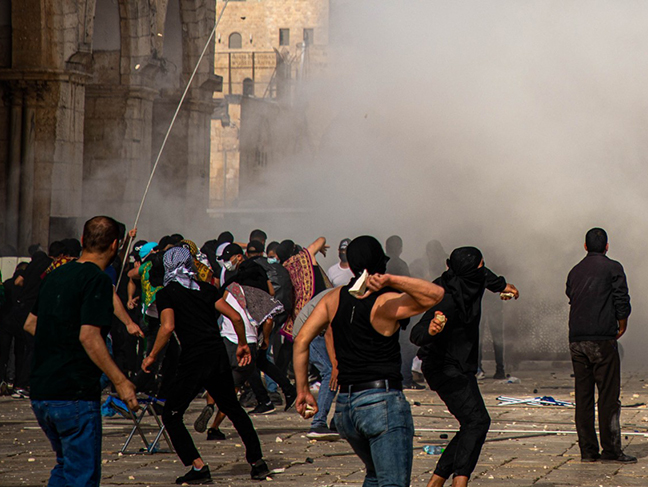 From the American Jewish Committee

As the final days of Ramadan drew Muslims to the Al Aqsa Mosque to pray and the celebration of Jerusalem’s reunification drew Israeli marchers to the streets to celebrate, a wave of violence that had been steadily building for weeks reached a crescendo on May 10 as Hamas fired more than 150 rockets toward Jerusalem and various towns and cities across southern Israel, forcing millions of Israelis into bomb shelters.

Here are four media myths circulating on social media distorting the reasons behind the violence that has escalated to the brink of war.

Myth: Israeli Police have launched an assault on the Al Aqsa Mosque at the end of Ramadan.

FACT: The violence we are seeing is the result of Palestinian incitement, not Israeli aggression. In the days leading up to the riots in the Temple Mount compound Palestinians stockpiled stone slabs, rocks, and fireworks around the site. Thousands of worshipers leaving Friday Prayer hurled rocks at Israeli police officers guarding the site, who responded accordingly. Videos from inside the mosque show stun grenades landing inside prayer rooms, as projectiles used to disperse the crowds outside have gone through doors left wide open.

Leaving the worship space more vulnerable amplifies the bogus battle cry that “Al Aqsa is in danger,” which has served to foment protests and violence for years. Meanwhile, Iran’s meddling is inflaming tensions as well. Ahead of Jerusalem Day, which has long been a flashpoint on Iran’s calendar, Iran’s Ayatollah Ali Khamenei wrote that “the Palestinians’ endeavors and the pure blood of resistance martyrs have managed to multiply Palestinian Jihad’s internal power by hundreds of times. Once, Palestinian youth defended themselves by throwing stones, but today they respond to the enemy’s attacks with precision missiles’.”

Social media also has been weaponized by Arab youth to agitate for more violence. Throughout the past month, a new social media trend arose that involved physically assaulting visibly Orthodox Jews and posting the attacks on TikTok.

Myth: The so-called “assault on Al Aqsa” is a Jewish effort to suppress religious freedom.

FACT:  Never in history has there been greater religious freedom and protection for all worshippers in Jerusalem than there has been since Israel took control of the city in 1967. When Jordan ruled the city, Jews were denied access to the Western Wall and to the cemetery on the Mount of Olives, where Jews have buried their dead for more than 2,500 years. Nearly 60 synagogues were destroyed or turned into stables or chicken coops and Jewish tombstones were ground up and used to pave roads. Jordan also passed laws that barred Christian institutions from acquiring real estate and limited how many Christian schools could open.

After the 1967 war, Israel abolished all of Jordan’s discriminatory laws and made it illegal to restrict access to sacred places. Israel also entrusts the oversight of the holy places to their respective religious authorities. For example, the Muslim Waqf oversees the mosques on the Temple Mount while Israel oversees security.

Myth: The eviction of 30+ families from their homes in Sheikh Jarrah, a neighborhood in East Jerusalem, is an example of ethnic cleansing.

FACT: First of all, the case centers on six families. Second, the Israeli Supreme Court hasn’t ruled on whether the landowners can evict the families who have been at-will tenants on the land since the 1980s.

But rather than wait for a court decision, Palestinians have made the families cause celebres, inciting violent clashes with Israeli police and Jewish extremists.

The dispute in Sheikh Jarrah originated in 1876 when the land, which houses the tomb of a revered Jewish high priest from antiquity, was under Ottoman rule. That year, Arab landowners sold the land to two Jewish trusts.

Jordan captured the plot in the Arab-Israeli war of 1948 and built dozens of homes there to house Palestinian families who had fled from what became Israel.

After Israel captured East Jerusalem in 1967, Jews were allowed to reclaim property that was under Jewish ownership before 1948. The Jewish trusts resumed ownership of the homes on the lot, but later sold it. The new landowners have tried to evict the residents ever since.

Now the issue lies with the Israeli Supreme Court and Israel’s Attorney General. The court had urged the parties to try and reach a compromise last week, but the Palestinian residents refused. A hearing slated to take place this week was postponed at the Attorney General’s request in order to avoid further inflaming tensions in the city.

Myth: This violence is all about the battle over sovereignty in Jerusalem.

FACT: The conflict over Jerusalem is fueling only part of the tension. The internal rivalry between two Palestinian political parties, Hamas and Fatah, and Palestinian Authority President Mahmoud Abbas’s decision to yet again postpone elections also explain some of the violence. Because Hamas doesn’t have a strong presence in Jerusalem, the militant group has coopted this conflict and enlisted Palestinians in Jerusalem to help reach their goals.

On May 10, Hamas fired rockets into Jerusalem after Israel ignored an ultimatum to remove its security personnel from the mosque compound and Sheikh Jarrah and release Palestinian rioters detained in the latest unrest. The Islamist militant group, which openly seeks Israel’s destruction, has a vast arsenal of missiles and rockets capable of striking anywhere in Israel. Before these rocket attacks, Hamas had fired a series of rockets into southern Israel and its activists had launched dozens of airborne incendiary devices over the border, causing blazes to erupt in parts of Israel near the Gaza border.

In a public address that aired on Al-Aqsa TV this weekend, a Hamas political leader designated as a terrorist by the U.S. State Department called on Arabs in Jerusalem to “cut off the heads of the Jews.” He added that a knife only costs shekels. “With those five shekels, you will humiliate the Jewish state.”