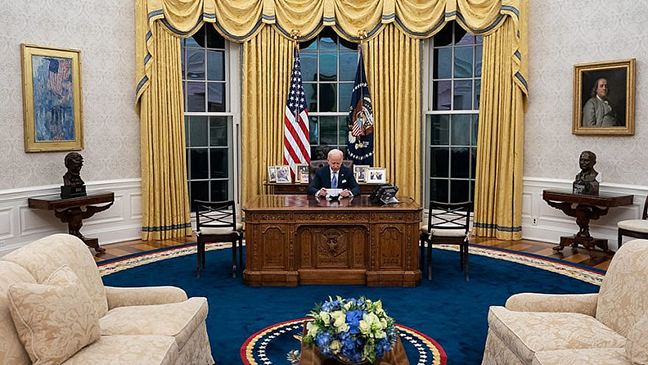 (JNS) — The Biden administration has come under withering criticism in the United States and Israel for its poor handling of the current situation in the Middle East. On May 11, U.S. State Department spokesperson Ned Price failed to mention Hamas or Islamic Jihad as terrorist organizations targeting Israeli civilians in his statement to the press. “Israel has the right to defend itself and to respond to rocket attacks,” Price said in his daily briefing. “The Palestinian people also have the right to safety and security just as Israelis do.”

Eytan Gilboa, an expert on U.S. policy in the Middle East at Bar-Ilan University in Ramat Gan, told JNS the response so far has been “ridiculous.”

“The American response is the most ridiculous and counterproductive statement any American administration would make on violence initiated by two terror organizations supported by Iran against a U.S. ally,” he said, noting the statement included “not one word about Hamas or Islamic Jihad.”

He continued, saying “the Biden administration has missed the context by focusing on Sheikh Jarrah and not on Hamas’s effort to take over the West Bank,” said Gilboa, referring to the neighborhood in eastern Jerusalem where Arab squatters may be forced by Israel’s Supreme Court to leave the homes they occupy, having been owned by Jews for decades.

This misplaced focus on side issues by the Biden administration “encourages the terror organizations,” he said. “This is a complete repetition of the Obama administration policy on the Israeli-Palestinian conflict, as if the same people who served in his administration have never learned anything.”

“The statements strengthen Hamas and Islamic Jihad and weaken Israel,” he stressed.

On a similar note, former U.S. Secretary of State Mike Pompeo blamed the Biden administration for its poor decision-making and for the continued rocket attacks on Israel.

“Biden delayed his call with Israeli leadership and restarted funding to the Palestinian Authority through the U.N. — both signal to Hamas & terrorists in the West Bank that America places less value on our relationship with Israel,” Pompeo tweeted on May 12.

Gilboa said the United States “should encourage Israel to complete the job — not the other way around. This even-handedness is working in favor of the terrorists. The United States is intentionally undermining Israel.”

He also noted that “the whole Middle East is watching, including Iran, Hezbollah in Lebanon and the Houthis in Yemen. This battle has to be won decisively by Israel.”

Gilboa also criticized the Biden administration’s lack of acknowledgment over Iran’s direct involvement in the current attacks on Israel. “American silence on Iran’s involvement in Gaza is shocking,” he said. “They are so eager to sign another nuclear agreement that they don’t want to antagonize Iran.”

“When they make these statements without making a distinction between a U.S. ally and a proxy of Iran, how will this be interpreted in the entire region?” he asked.

The essence of the conflict, as Gilboa noted, is about Hamas’s need to exert itself as the leader of the Palestinians, as well as to remain a threat to the Palestinian Authority.

Speaking with JNS just before Hamas launched its opening salvo at Jerusalem on May 10, Jim Phillips, a senior research fellow for Middle Eastern affairs at the Heritage Foundation, said the Arab riots during Ramadan is “Hamas’s grand strategy in the long run to destroy Israel, but also to undermine the Palestinian Authority by outflanking it.”

“The Palestinian Authority is a weak and corrupt force that is ‘on its last legs’,” he said. “Nonetheless, it’s better to have them there than Hamas in the West Bank.”

According to Phillips, Hamas is “rejecting the state-based approach for the revolution-to-the-end approach.”

He said he supports the security moves Israel has made and emphasized that “Israel needs to protect itself first and foremost, and only secondarily focus on responding to the outside world.”

Phillips said he believes that Hamas would be sending this message “regardless of who is in the White House, but the Biden policy is encouraging these kinds of opportunities to embarrass Israel because Hamas and the Palestinians know there is a chance of driving a wedge between Israel and the United States.”

“It’s going to get a lot messier,” said Phillips. “We’re seeing a slow-motion Palestinian war that could accelerate in the near future.”

‘You have to look at the bigger picture’

Efraim Inbar, president of the Jerusalem Institute for Strategy and Security, seems satisfied so far with the Biden administration’s response, saying, “they support Israel’s right for self-defense and criticize Hamas launching missiles on civilian targets.”

He added, however, that the question remains over “how long will it take the progressives to affect the Biden administration.”

That could further deteriorate the situation in the Middle East, especially if Hamas and Palestinian Islamic Jihad remain encouraged and motivated by what they see and hear coming out of the White House and the State Department.

Referring to U.S. President Joe Biden, Secretary of State Antony Blinken and National Security Advisor Jake Sullivan, Gilboa said they “seem not to understand, or if they do understand, they take the wrong actions and send the wrong messages, which are counterproductive.”

“All the steps taken by the Biden administration, which include renewing aid to the Palestinian Authority, renewing aid to UNRWA and all of these statements, encourage Hamas and Islamic Jihad to continue terrorism and violence and prevent any prospects for peace,” he said.

When it comes to Biden’s handling of the Israeli-Palestinian conflict, Gilboa is sure of one thing: “This is a major test, and he is failing.”