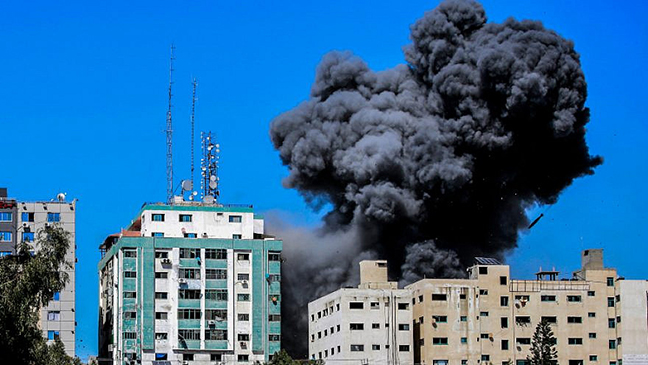 Smoke rising from the Al-Jalaa tower in Gaza after an Israeli airstrike on the building, which housed Hamas operatives and several media outlets, including the “Associated Press” and “Al Jazeera,” May 15, 2021. Photo by Atia Mohammed/Flash90.

(JNS) — Journalists are expressing their outrage that the 12-story Al-Jalaa building housing the Gaza headquarters of Associated Press and Al Jazeera was targeted during retaliatory Israeli airstrikes on May 15.

Al Jazeera Jerusalem bureau chief Walid al-Omari said that by striking the building, Israel was acting “not only to sow destruction and killing, but also to silence those who broadcast it.”

Not exactly an objective assessment.

AP CEO Gary Pruitt released a statement expressing that the world’s largest news syndication service was “shocked and horrified” by the strike.

Meanwhile, Hamas was using the building as an intelligence and operations center.

“This is an incredibly disturbing development. We narrowly avoided a terrible loss of life,” Pruitt’s statement added. “A dozen AP journalists and freelancers were inside the building, and thankfully we were able to evacuate them in time. The world will know less about what is happening in Gaza because of what happened today.”

Senior adviser to Israeli Prime Minister Benjamin Netanyahu, Aaron Klein, told JNS that “it is Hamas that must be condemned for housing its terrorist infrastructure in the same complex as the international media. This is far from the first time that Hamas has used journalists as human shields.”

Klein added that the building was utilized by Hamas “for waging a terror war on Israeli civilians and was only targeted after the Israel Defense Forces warned civilians at the site and waited enough time for them to evacuate. Hamas provides no such warning when it daily commits the double war crimes of firing rockets indiscriminately into Israeli cities and launching those rockets from Palestinian civilian zones.”

The reason that AP was able to evacuate its journalists is because the IDF alerted every single person inside that the building was about to be targeted by an airstrike. And aside from phone calls and text messages, the IDF clips the rooftops of such targets with a drone strike — meant not to cause significant damage, but to further warn civilians inside the building that they are risking their lives by staying inside.

The IDF has taken these same measures with nearly every carefully selected target, as it works with surgical precision to hit terrorist infrastructure, while limiting the possibility of civilian casualties.

It is a procedure that no other army in the world would dare undertake, as it gives additional time to the enemy to continue firing rockets at population centers. It is also a practice that is not featured prominently in mainstream-media coverage.

In a statement, Netanyahu said, that, “as always, Israel is doing everything possible to protect our civilians and keep Palestinian civilians out of harm’s way. We demonstrated this yet again [yesterday] when we warned civilians to vacate the building used by the Hamas terror intelligence. They vacated the premises before the target was destroyed and that’s why you don’t hear of casualties from these collapsing terror towers because we take special care to avoid these civilian casualties, exactly the opposite of Hamas.”

As reported by Palestinian Media Watch, even the Palestinian press has acknowledged that buildings are evacuated before they are hit.

PMW director Itamar Marcus noted that “Israel’s care for civilians is unique, especially in the history of warfare against terror organizations that use civilians as human shields. Moreover, the international community’s questioning of Israel about civilian casualties exposes its great hypocrisy.”

“Hypocrisy” is an overly kind word. A better term would be “narrative warfare.”

In the current conflict being waged between Israeli forces and Palestinians in Gaza, Judea and Samaria — and even within fully Israeli-controlled cities, including Lod, Akko, Haifa, Jaffa, Jerusalem and others — the media has been intentionally painting pictures of the war designed to paint Palestinians as innocent victims. Indeed, it has been purposefully mis-framing the events that led up to the ongoing full-scale hostilities.

According to the media, this war started initially because the Israel Police employed crowd-control measures near a gate outside the Old City of Jerusalem, where innocent Muslim penitents were gathering after their daily Ramadan fast. Reports to this effect made little mention, if at all, of the rioting taking place there, night in and night out.

Next, the media made it sound as though Arabs had no choice but to riot when Israeli courts were moving to evict Palestinians from homes in eastern Jerusalem and handing those houses over to hardline Israeli settlers. It is of little interest that the neighborhood in question, Sheikh Jarrah, is the site of the tomb of the ancient Jewish high priest, Simon the Righteous; that the homes in question were owned by Jews for generations; that the Arabs living in them are squatters; and that the case had been in court for more than 30 years.

The straw that clearly broke the Palestinians’ back, however — and led to all-out war — was when Israeli law enforcement ostensibly “stormed” the Al-Aqsa mosque compound. It didn’t matter that Israeli police officers entered the compound to dispel a violent Arab riot, which included the throwing of rocks and hurling of Molotov cocktails at defenseless Jewish worshipers in the Western Wall plaza some 70 feet below.

Suddenly, an annual parade by Israelis on “Jerusalem Day” was portrayed as an act of aggressive nationalism. And when Arabs rioting on the Temple Mount — Judaism’s holiest site beyond any dispute, even among Muslims — set a tree ablaze with fireworks illegally lit while Jews were having a concert at the Western Wall, many media outlets spread images of Jews “celebrating the burning of Al-Aqsa.”

Worse, these outlets have been attempting to disingenuously link up the Palestinian cause with the sentiments that have fueled the Black Lives Matter movement — a movement that similarly justified rioting in urban centers.

This is done with careful coordination across media outlets, and employs talking points tested in focus groups, with the specific goal of eliciting emotional responses from viewers sitting in front of their televisions and phones.

To see this phony media campaign in action, one can watch various Israeli spokespersons across different networks being bombarded with the exact same accusations and questions about civilian casualties in Gaza.

Aside from its strike on the building housing AP and Al Jazeera, the IDF actually used an unwitting mainstream media to achieve a well-designed strategic objective. A day prior to the hit, the Israeli military reportedly alerted various outlets to its supposed upcoming ground incursion into Gaza.

At the time, the IDF tweeted that its “ground troops are currently attacking in the Gaza Strip,” a post that promptly went viral as evidence that the said incursion had begun.

In response to the messages being broadcast by media outlets, Hamas ordered its operatives to enter the network of tunnels — built with funds and materials that could otherwise be used to better the lives of Gaza’s residents — in preparation for infiltrations into Israel. At that very moment, Israel bombed the tunnel network, killing dozens of terrorists.

This isn’t the first time that Israel has “played” the mainstream media, which deserves it.

Israel is a democracy, charged with protecting its citizens from attacks by well-funded terror organizations. It neither seeks conflict nor prefers fighting. Yet a “free press” is clearly working for — and even in the same building as — a terrorist organization.

The reason that Israel struck the building that houses the AP and Al Jazeera offices in Gaza had nothing to do with the media’s agenda of painting Israel as the aggressor, in its brazen and dangerous attempt to drain international support for the Jewish state.

But, if Israel had targeted media outlets that openly and intentionally support its enemies, it may have been justified on those grounds alone. Sadly, but not surprisingly, it is unlikely that outlets like AP and Al Jazeera will learn their lesson.