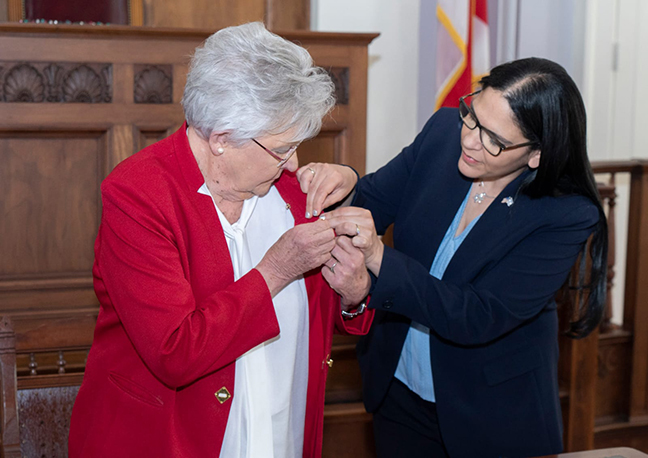 Continuing a long legacy of the state’s support for Israel, in the final hours of this year’s legislative regular session, the Alabama Legislature quickly passed a resolution supporting Israel and condemning Hamas.

The measure, Senate Joint Resolution 138, passed the House at 10:10 p.m. on May 17, moments before the body adjourned for the year.

The resolution expresses “vigorous support” for Israel as a Jewish and democratic state with secure borders and the right of self-defense; and calls on Hamas to end the rocket attacks, renounce violence and recognize Israel’s right to exist.

The resolution also calls on the Biden administration to support a cease-fire “that prevents Hamas from retaining or rebuilding its terrorist infrastructure, including the capability to launch rockets and mortars against Israel,” making life better for Gazans; and condemned the Hamas practice of embedding its fighters and weapons in homes, schools, mosques and hospitals, using Palestinian civilians as human shields. The resolution lays blame for the situation and for civilian casualties in Gaza “precisely where blame belongs,” with Hamas.

Alabama was the first governmental body to call for the establishment of a Jewish homeland, in 1943, five years before Israel was established and during the height of the Holocaust.

In recent years, there have been numerous resolutions and proclamations, including a 2016 resolution denouncing the Boycott, Sanction and Divest movement and barring the state from doing business with entities that boycott Israel, and the Deputy Speaker of the Knesset addressed a joint session of the Legislature that year.

In 2019, Alabama applauded the U.S. embassy move to Jerusalem, and was the first to use the term “eternal, undivided” in reference to Jerusalem as Israel’s capital.

Also, the Arrow anti-rocket system that has been hailed for saving so many lives during the conflict has numerous developmental ties to Alabama, a fact that was noted in the resolution.

A signing ceremony was held on May 21 in Montgomery, with Governor Kay Ivey and Consul General Anat Sultan-Dadon from Israel’s consulate in Atlanta.

“The State of Israel is grateful for the unwavering support of our friends and allies in the great state of Alabama,” said Consul General Sultan-Dadon. “Israel enjoys a long-standing warm and fruitful relationship with the state of Alabama economically, culturally and politically. The security and safety of Israel is deeply connected to the support of our greatest ally, the United States. Alabama’s unequivocal standing with Israel is a true blessing which we greatly appreciate.”

“The state of Alabama and Israel have a long friendship,” Ivey said. “I am proud to sign this resolution, which only reaffirms our unequivocal support. Alabama stands with Israel.” Ivey had tweeted support for Israel on May 12.

On May 14, Alabama Chief Justice Tom Parker reached out to Robin Rowan of Church for Israel and John Buhler of the Alabama-Israel Task Force to help encourage leaders in the legislature to pass a joint resolution declaring Alabama’s support of Israel’s right of self-defense.

Parker and his wife, Dottie, were married in Israel, and she sang Israel’s national anthem, “Hatikvah,” at the 1995 gubernatorial inauguration of Fob James.

With one day remaining in the session, Senator Arthur Orr of Decatur brought the resolution to the Senate floor, and it quickly passed by voice vote.

There was a push on May 17 to bring the resolution to the House floor, with Rep. Chris Pringle bringing it to House Speaker Pro Tem Victor Gaston. Parker also worked with Speaker Mac McCutcheon to carve out time to have it considered. “He committed to try to make it happen,” Parker said, “and he did!”

Rowan said watching it make its way through the House “was a nail-biting experience, but the Lord’s hand was on it!”

She noted that “some far-left Democrats embarrassed themselves with very antisemitic language and misinformation about Israel during the debate process.”

After Rep. Terri Collins introduced the resolution, Rep. Juandalynn Givan wanted to know “what in the slam-chiggity is this,” Yellowhammer News reported.

When Collins said a lot of Alabamians wanted to show solidarity with Israel, the Birmingham representative replied “I know ain’t nobody from not one of my neighborhoods told you that… Now, if all y’all ‘Dumplicans’ want to do it, that’s up to y’all.”

She said she was embarrassed by some of the “agenda” bringing “a lot of grief and a lot of strife and heartache here in this chamber,” and wanted to see several votes in opposition next to her name.

She added that resolutions supporting Africa and South Africa never would be introduced in the Legislature. Givan did not respond to inquiries from this publication.

Rep. Thomas Jackson also spoke out against the resolution, saying he wished it “would include the opposite side, that Israel would start restraining itself.”

He said Israel, which “is not the Israel that the Bible was talking about,” is “just as bad” as Hamas and is “taking advantage” of Gaza residents. “These people do so much damage to so many people… And the United States always funded them. Isn’t that wrong?”

In an email to this publication, Jackson insisted that he is pro-Israel, and he was “trying to convey the real need for cease fire! Too many innocent people are dying as it is related to terrorists. Mostly the Arab people who are suffering the most, because they are caught in the midst of the conflict!”

He added, “I just hate to see innocent people suffering for whatever reason.”

Rep. Mary Moore of Birmingham said the Biden administration was “taking his time” to determine the facts of the conflict, but said Republicans “don’t respect that. You want somebody to go and say, ‘Shoot ’em up, bomb ’em up, kill ’em up.’ Regardless who it is. ‘Babies, if you bomb them now you won’t have to deal with them later.’ And that’s exactly what’s going on over there in Israel.”

Moore also did not respond to inquiries from this publication.

House Minority Leader Anthony Daniels, a Democrat from Huntsville, said on the House floor that the resolution is a positive resolution. “I think we all are in support of that resolution… I don’t want anybody to get the wrong idea about Democrats being antisemitic. That’s certainly not the case.”

Yellowhammer reported that later in the evening, on an unrelated matter, Givan said “I’m not antisemitic in any way.”

The resolution passed the House, 89-0, with 10 abstentions.

Buhler said the timing was especially meaningful, as the resolution passed on the Jewish festival of Shavuot, “aligning with the giving of the divine Law to Moses upon Sinai,” and the Christian Pentecost.

“I pray this Joint Resolution, which stands for truth, is an example of what can be done throughout the country,” Rowan said. “The TRUTH will always succeed.”

Earlier in the session, a coalition of Christian and Jewish groups successfully promoted a bill for Holocaust education in Alabama schools.

After the signing, there was a gathering in Parker’s office, where the Israeli delegation spoke of the importance of the resolution to the Israeli people, and that it was done quickly on the final day of the session, when there is always an overwhelming amount of last-minute business to consider.

Though many state legislatures are no longer in session, Parker expressed hope that other states would emulate this resolution and publicly support Israel. 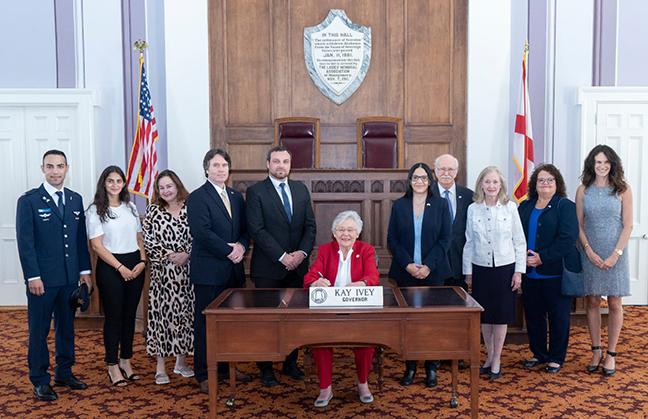