What can a skeptical world expect from Naftali Bennett as prime minister? 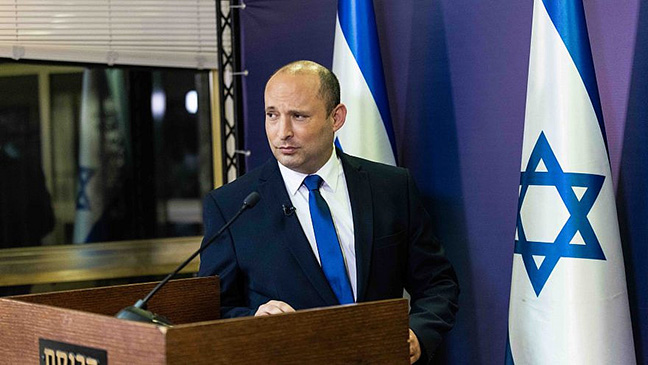 Yamina Party head Naftali Bennett gives a press conference at the Knesset in Jerusalem on May 30, 2021. Photo by Yonatan Sindel/Flash90.

(JNS) — This isn’t the way he planned on becoming prime minister of Israel. When Naftali Bennett left the world of high tech to enter Israeli politics, the idea that he might achieve the top spot by pushing aside Benjamin Netanyahu would have been inconceivable to him. And even later on, as he led a party to the right of Likud, he regarded it as an ally of the premier, not an opponent — let alone the engine of his political demise. Any notion of him succeeding Netanyahu was a scenario that smart political observers believed was something that could only occur after Netanyahu had retired and also involved Bennett rejoining the Likud.

But whether or not this is how he might have dreamed of achieving such a feat, Bennett is set to become prime minister sometime in the next couple of weeks by forging an unlikely alliance with seven other political parties, including those on the center, left and even an Arab political faction with whom he has little in common. The main purpose of this bizarre coalition is to supplant Netanyahu, the man whom Bennett looked up to and loyally served.

In the process, he and his Yamina Party have become the object of the political right’s rage for what they consider his betrayal and is also viewed with skepticism by his new allies. The same is true of most international observers and even friends of Israel in the United States, most knowing very little about Bennett.

Netanyahu is not giving up, and his followers are seeking to persuade and/or intimidate Bennett’s colleagues into abandoning him. If they succeed and find even one defector, the political chaos will continue.

That would serve Netanyahu’s purposes. Though a fifth election is unlikely to yield him the majority he failed to achieve in the last four rounds of voting, it would mean that he can go on as Israel’s permanent temporary prime minister, even if that would be more of a commentary on a broken electoral system than a mandate.

If Bennett is sworn in as Netanyahu’s successor, the odds will still be against his government surviving for long. But that’s a question for another day. For now, the issue is what sort of a prime minister will Bennett be?

Netanyahu has dominated Israeli politics and the American discussion about Israel for so long that it’s hard for many people to wrap their brains around the concept of life after him. Indeed, that is the essence of the argument against change since so many people have bought into the idea that the prime minister is irreplaceable.

But change must come sooner or later, and if it must be now — and a majority of Israel’s voters cast their ballots for parties opposed to his continued tenure — the Jewish state could do a lot worse than Naftali Bennett.

He would be the first Israeli prime minister who is religiously observant and the culmination of a process by which the kipah-wearing religious Zionist movement has moved from the margins of Israeli society in Israel’s first decades, when it was dominated by the avowedly secular and Socialist Labor Party, to the mainstream. And though he wouldn’t be the first prime minister with American ties — Golda Meir grew up in Milwaukee, and Netanyahu spent much of his youth in suburban Philadelphia — Bennett, though a sabra, is the son of American immigrants to Israel.

In one sense, Bennett’s path to politics is a typical one since, like Netanyahu and Ehud Barak, he was a member of the Israel Defense Forces’ most elite commando unit, the Sayeret Matkal. But rather than staying in the army or going straight into politics, Bennett spent a decade in the world of high tech. He co-founded an anti-fraud software company and served as its CEO before it was sold for a reported price of $145 million. Later, he was also involved in the success of another startup that sold for more than $100 million. That makes him not only a very rich man but someone who understands economics — a topic that is a mystery for most Israeli politicians not named Netanyahu.

Bennett entered Israeli politics as an admirer of Netanyahu and served as his chief of staff for two years when he led the opposition to Ehud Olmert. But, as has been the case with many of the most talented people in the Likud in the last 15 years, he was forced out of the prime minister’s orbit as a result of personal acrimony from Netanyahu and, allegedly, also from his wife Sara.

From there, he led the Yesha Council, which represents the interests of the settlement movement, and eventually formed his own right-wing party with Ayalet Shaked, another person driven out of Netanyahu’s office. His Jewish Home Party (since renamed Yamina) entered the Knesset in 2013, and Bennett has held a number of ministerial portfolios since then, in which he has generally been considered to have done a good job.

The knock on Bennett in that time and during the last two years of political stalemate is not that he lacks talent or knowledge. Indeed, he is one of his country’s best and brightest. But he is considered a political lightweight who is easily outmaneuvered, especially at the hands of his former mentor. Netanyahu has relied on the votes of Bennett’s party to form his governments, but he has been particularly focused on diminishing his former aide’s prospects. At least up until now, he always got the upper hand. Unlike other, more marginal figures on the right, the prime minister perceived Bennett to be a plausible successor to him and marked him for oblivion. Perhaps that is why Netanyahu seems to be confident that, even now, he can somehow outfox him.

But if Netanyahu fails to prevent his eviction from the official residence on Jerusalem’s Balfour Street, this may be the moment when, finally, Bennett will have the chance to show that his security credentials, financial expertise and attractive personality are exactly what Israel needs at the moment.

The notion that he will be weak on security issues is rooted in the presence of his unlikely left-wing in the new coalition. Still, Netanyahu has also been flexible and sometimes compromised on his core beliefs when he thought it was politically expedient to do so. It was, after all, Netanyahu who withdrew Israeli forces from Hebron in the 1990s, as well as the man who endorsed a two-state solution and accepted a settlement freeze in a futile attempt to ingratiate himself with former President Barack Obama. With Netanyahu lurking in opposition, Bennett is more likely to stick to his principles both on the conflict with the Palestinians and the threat from Iran than those now calling him a “traitor” are willing to admit.

And merely by replacing Netanyahu, he is likely to get at least a smidgeon of goodwill from the Biden administration and American Jews, even if that won’t last long as the debate about appeasing Iran heats up.

In such a polarized political era, both in Israel and the United States, it’s hard to imagine an attempt to reach across ideological divides being anything other than a disaster. But Bennett represents the chance for a new generation of leadership in Israel to prove that the sky won’t fall without Benjamin Netanyahu being there to hold it up. Though some may not be willing to admit it, no one — not even a Netanyahu — is indispensable.

Bennett’s prospective government’s internal contradictions may be too great to permit him to succeed. But if he takes office, at the very least, he deserves the good wishes as well as the help of those who love Israel. We should all be willing to retain the ability to be happily surprised if, as unlikely as it may seem now, he does far better in maintaining his predecessor’s achievements than his detractors think.