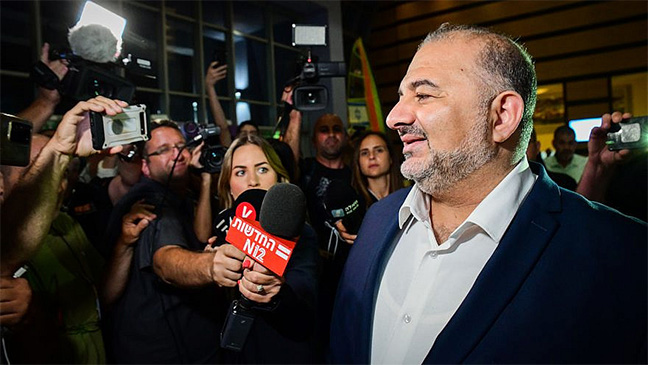 Mansour Abbas, head of the Ra’am Party, arrives for coalition talks at the Maccabiah Village in Ramat Gan on June 2, 2021. Photo by Avshalom Sassoni/Flash90.

(JNS) — While addressing Congress last month, Rep. Alexandria Ocasio-Cortez (D-N.Y.) and fellow “Squad” members denounced Israel not only for its efforts to defend its people against Hamas terrorism, but also labeled it an “apartheid state.”

This fiction that seeks to characterize the only democracy in the Middle East as morally equivalent to apartheid-era South Africa has gained traction on the left and in the media. It was the centerpiece of leftist NGO Human Rights Watch’s anti-Zionist diatribe and was echoed by media influencers like HBO’s John Oliver and New York Times columnist Nicholas Kristof.

The false analogy that demonizes and mischaracterizes life in Israel is a propaganda talking point rather than a serious argument. However, the fact that it is divorced from reality hasn’t stopped those who promote it from being able to make it part of mainstream discourse about Israel.

When Israel’s new government takes office — barring any last-minute changes, it is set to be voted in on June 13 — the “apartheid state” lie will be seen to be even more of a canard than before. By including the United Arab List — popularly known by its Hebrew acronym Ra’am—headed by Mansour Abbas in its ranks as a member, the idea that the Jewish state treats its non-Jewish minorities by a different legal standard will be exposed as a sad joke.

The presence of an Arab political party in the new coalition that is set to oust Prime Minister Benjamin Netanyahu after 12 consecutive years in power is highly controversial. Critics of the so-called “government of change” assert that Ra’am’s presence is a danger to the country’s security.

The case for this critique is not insubstantial. Ra’am is a party that is avowedly Islamist and, at least until now, ideologically connected to the Muslim Brotherhood, the terror-supporting Egyptian-based movement that is also the godfather of the Hamas terrorist group. Its platform is openly anti-Zionist, opposing the existence of a Jewish state no matter where its borders might be drawn and supporting the so-called “right of return” for the descendants of 1948 Arab refugees.

Of the four Arab political parties that were previously aligned together under the Joint List, its positions could be characterized as the most radical of the quartet. That made it the most unlikely to be part of a Zionist government, let alone one headed by a right-winger like Yamina Party leader Naftali Bennett.

It can be argued that its presence in the government could undermine the ability of the coalition to act to defend Israel. That’s especially true with respect to the possibility of a renewal of the recent terrorist attacks from Gaza or bloody rioting by Israeli Arabs, which Ra’am defended.

But in an illustration of the truth of the expression that politics makes strange bedfellows, Ra’am has chosen to place pragmatism over ideology, and so has joined forces with Bennett and Yesh Atid Party leader Yair Lapid.

The decision of Abbas to run separately from the other Arab parties in the last election was rooted in his apparent belief that Israeli Arabs needed their political representatives to prioritize their well-being and interests over Palestinian nationalist goals.

As the conflict between Israel and the Palestine Authority, and its Hamas rivals, over the future of the West Bank and Gaza heated up after the disastrous 1993 Oslo Accords, Israeli Arabs became increasingly radicalized. In the last 30 years, their political parties became far more focused on supporting Arab tyrants in Ramallah and Gaza than the interests of their voters.

Unlike their three partners in the Joint List, Ra’am’s leaders decided to draw some stark conclusions from last year’s Abraham Accords that normalized Israel’s relations with a handful of Muslim countries. Much of the Sunni Arab world has grown tired of being held hostage by Palestinian intransigence and now sees Israel as a strategic ally against Iran, as well as a trading partner. If that was so, why should the Arab minority inside the Jewish state make support for the fantasy of Israel’s destruction their political priority?

Abbas didn’t become a Zionist, but he seems to have grasped the illogic of Israeli Arabs being the dupes of Hamas and the Palestinian Authority. As such he broke away from the Joint List and campaigned as someone who intended to bargain with the Zionist parties and get the most he could for his constituents.

Ironically, the person who made this stance politically viable is the one who is complaining the most about it now: Benjamin Netanyahu. Correctly sensing that a fourth election in two years would not break the deadlock over his continued tenure in office, he shifted gears on his approach to Israeli-Arab voters. Instead of treating them as a threat to the Jewish state, he appealed to them as potential supporters. After the election confirmed that there would be no right-wing majority government as long as he was leading the Likud, Netanyahu negotiated with Abbas to support a government under his leadership.

And that’s likely what would have happened, had not the Religious Zionist Party and its leader Bezalel Smotrich vetoed the gambit. While Bennett and Yamina would have joined a Netanyahu-led coalition that included Ra’am, Smotrich would not and that doomed the prime minister’s efforts.

But having effectively kashered outreach to Ra’am, Netanyahu could only rage on the sidelines as Bennett and Lapid succeeded in doing exactly what he had tried to do.

That will create a government that is ideologically incoherent, though it will also be one united by pragmatic interests. Bennett and Lapid would be foolish to trust Abbas. But by paying — just as Netanyahu would have done — Ra’am in patronage, funding for Arab communities and other concessions to its voters, the new government will have struck a deal that Abbas will have a vested interest in keeping.

For all of the justified fears about bringing an Islamist party into the governmental tent, this is exactly what Israel has wanted for many decades. Indeed, visionary Zionist leader Ze’ev Jabotinsky, who is still rightly revered on the Israeli right as its founding father, wrote a model constitution for a future Jewish state in 1934 that called not only for legal equality for Arab citizens but also envisioned that every one of its governments would have Arab leaders alongside Jews.

Having an Arab political party embrace compromises that effectively nullify their anti-Zionist and Islamist beliefs could be a formula for coexistence in a country in which there will always be a significant Arab minority. That this will complicate things for any government is a given; it is also a signal to other Arabs that their continuing war on Israel’s existence must be abandoned.

Of less importance is the way the agreement with Ra’am will strengthen Israel’s case to the world. Still, an Israeli government with an Arab political partner conclusively debunks the ongoing lie about Israel and apartheid.

Unfortunately, that won’t stop people like AOC and her pop-culture partners on the left from peddling their lies. Contempt for Jews as possessors of “white privilege” and hatred for Israel as an expression of that deceitful concept are deeply entrenched in the mindset of those who advocate for fashionable ideas about intersectionality, critical race theory and the Black Lives Matter movement. Much like those who claim to speak for the LGBTQ community but dismiss the fact that Israel is the only country in the Middle East where gays can live equally and safely as “pinkwashing,” don’t expect leftists to give up their apartheid lies about the Jewish state just because they are as illogical as they are immoral.

While we can’t yet know whether the entrance of Ra’am into an Israeli government is truly a harbinger of coexistence and peace, it will be conclusive proof that those who demonize Israel as an “apartheid state” are spreading lies that can and should be debunked.