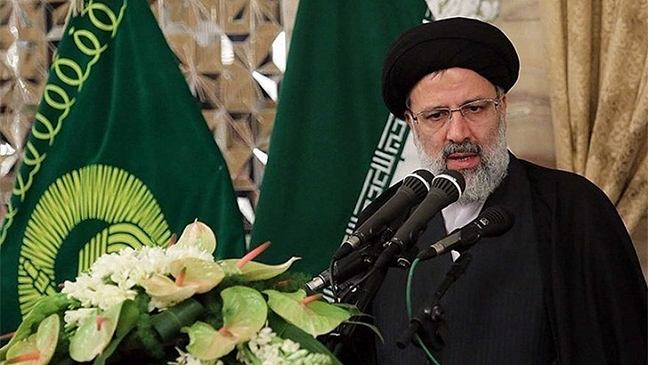 (JNS) — Iran’s new president Ebrahim Raisi will be sworn in on Aug. 5, and he is already making his mark. Reports on Aug. 3 that a number of ships in the Gulf of Oman were the victims of a cyber attack is the latest in what appears to be Iran’s effort to flex its muscles and show the Middle East who’s boss. Together, Raisi and Ayatollah Ali Khamenei seek to take Iran’s threats to a new level and turn their country into a regional superpower.

Uzi Rabi, director of the Moshe Dayan Center for Middle Eastern and African Studies at Tel Aviv University, told JNS that Raisi’s new role as president and the recent Iranian attacks point to “a new reading of the geopolitical chessboard by Iran.”

Rabi noted that with the United States bowing out of the Mideast, Tehran sees the region as a “comfortable arena” in which it can “play a hegemonic role.”

“Israel is being put to the test,” he said, noting he believes that Jerusalem has “gotten the message.”

While Khamenei is the ultimate decision-maker on all matters of state, Raisi will add his ultra-conservative views and influence on the country’s domestic and foreign policies. Raisi is also widely viewed as a potential successor to Khamenei.

The incoming president stands accused by many Iranians and human-rights activists over his alleged role in the mass executions of political prisoners in the 1980s.

According to Rabi, millions of people in Iran “hate” the ruling regime. To them, Raisi’s presidency is a major setback in terms of domestic reform or progress. “This is the loss of hope,” he said.

Tuesday’s incident comes just days after Iran launched multiple drones that slammed into Mercer Street, a Japanese-owned tanker managed by British company Zodiac Maritime, killing a British and a Romanian national. The ship’s British management company is owned by Israeli businessman Eyal Ofer, who is based in London.

During a visit to the Israel Defense Forces Northern Command headquarters on Aug. 3, Israeli Prime Minister Naftali Bennett expressed his disappointment in the European Union for sending a representative to Raisi’s inauguration.

“Unfortunately, an E.U. representative intends to attend the swearing-in ceremony of the new Iranian president, Raisi,” said Bennett. “Raisi is the most extreme Iranian president of them all, and the competition is tough. From here, I call on the E.U.: One cannot talk about human rights and simultaneously honor a murderer, a hangman, who has eliminated hundreds of opponents of the regime.”

Turning his attention to the attack on the oil tanker, Bennett warned Iran, saying, “Iran already knows the price that we exact when someone threatens our security. The Iranians need to understand that it is impossible to sit peacefully in Tehran and from there ignite the entire Middle East. That is over.”

While U.S. Secretary of State Antony Blinken promised on Aug. 2 that “there will be a collective response,” Iran also promised that it would “not hesitate to protect its security and national interests, and will immediately and decisively respond to any possible adventurism.”

‘There is a single track operating in Europe on Iran policy’

According to Behnam Ben Taleblu, a senior fellow at the Foundation for Defense of Democracies, Iran’s latest drone attack at sea is part of the “larger shadow war” between Iran and Israel.

He noted a similar drone attack in July against a maritime target Iran likely believed was connected to Israel.

“These attacks indicate that Iran is poking and prodding to test Israel’s resolve while incrementally working its way up the escalation ladder,” he said. “Currently, there are three domains for this shadow war: land, sea and cyber. What is changing are the targets and weapons used in these domains.”

Ben Taleblu slammed the P5+1 effort to appease Iran and return to the Iran nuclear deal amid mounting evidence of Iran’s obvious efforts to destabilize the Middle East.

“Sadly, Iran’s European interlocutors in talks to resurrect the JCPOA have not put their money where their mouth is on Iran’s nuclear and non-nuclear threats,” he said. “There is a single track operating in Europe on Iran policy, and that track leads to resurrecting the JCPOA. If the past is prologue, Europe is unlikely to walk away from the JCPOA due to this.”

Ben Taleblu said he believes that the United States “should work with Israel and Europe to declassify evidence linking the attack to Iran and help coordinate a multilateral diplomatic and economic response.”

He added that Israel “will likely respond covertly” against Iran, which, in turn, “is likely to absorb the escalation and look to attack soon to signal that it cannot be deterred.”

With regard to Raisi, Ben Taleblu said his presidency “is a metaphor for Iran’s growing comfortability with escalation, be it at home against U.S. partners like Israel or at home against the Iranian people.”

He predicted that “we can expect an intensification of the worst behavior the Islamic Republic is already known for.”