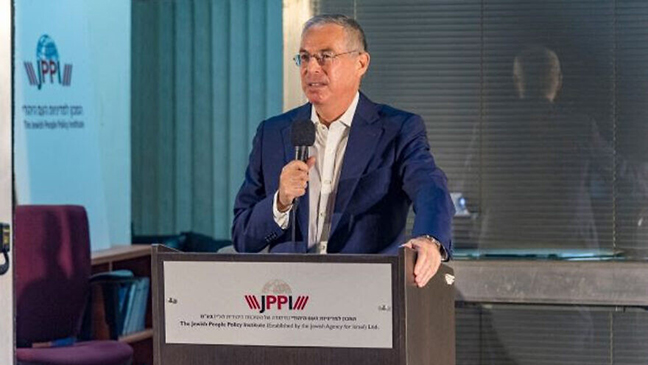 During the event, a panel discussion was held on the “The Triangular Relationship: Jerusalem-Washington-American Jewry, How to Alleviate the Crisis” with the participation of former Ambassador to the United States Salai Meridor and former Consul General to New York Dani Dayan.

In his first public statement since being appointed to the post, Herzog, 69, said he was well aware of the size of the task and the responsibilities before him: “I strongly believe in the Israeli-American alliance. I believe in the values on which it is founded. I believe in its future, and I believe that it should be turned into a two-way partnership.”

“I have never been a politician, and I never intend to be,” he continued. “I go to represent the State of Israel as a diplomat and not a political figure. I represent an unprecedentedly broad government in Israeli politics. I am happy to say that in addition to the government itself — the prime minister, the deputy prime minister and other members of the various sectors who welcomed my appointment and voted unanimously in favor — the opposition leader also called me and congratulated me on the appointment. I see this as an asset of someone who represents a wide range of Israeli society.”

One of the main challenges, according to Herzog, will be the preservation of U.S. bipartisan support for Israel, an issue he dealt with as part of his purview at JPPI. “Since I was appointed to the position, I have been preparing an orderly action plan to deal with this matter,” he said.

Herzog sees the delegitimization of Israel as a significant challenge that must not be underestimated, emphasizing that “we are in the midst of a war of consciousness, and the State of Israel has to develop new, strong and profound tools to deal with this challenge.

In his opening of the event, Stern, JPPI’s president, thanked Herzog for his great contribution to the Institute. “Mike is the right person at the right time for the right place. Mike has 10 years of significant work behind him at JPPI,” he said.

Barak, who appointed Herzog his chief of staff when he served as Minister of Defense, said he believed this new role was a perfect fit. During his wide-ranging comments, he said that the U.S. withdrawal from the nuclear deal was in the hands of the Iranians, and that they have progressed dramatically toward being a “nuclear threshold state.”

Action to damage the nuclear infrastructure, if required, has also become “much more complicated to carry out,” he said.

Barak added that “the special triangular relationship between Israel, the United States and the American Jewish community is an asset. The totality of the circumstances, as well as the mistakes of the former government, led to some strain in relations between Jerusalem and Washington. It is essential to renew the mutual respect and intimate discourse at the top.

“We expect the United States to respect Israel’s sovereignty and its right to make decisions that are essential to its security, even if contrary to the administration’s position,” he continued. “On the other hand, we must respect the sovereignty of the United States. There will be controversy. But to intervene as a country, in the depths of the internal political process of another country — this is a harmful and hopeless mistake in advance. The U.S. withdrawal from the 2018 nuclear deal was a short-term victory. The agreement was indeed bad, but from the moment it was signed, it became a fact and was not abolished even when the United States withdrew from it.”

Barak believes that the severe cumulative damage in relations with the Democratic Party was unnecessary and requires immediate repair. It is his impression that the Biden-Bennett meeting was an initial step and that Herzog will have to work to complete the course correction.

“As for the treatment of non-Orthodox groups,” he said, “we do not have the luxury of giving up millions of Jews who have chosen to exercise their Jewish identity in a Reform or Conservative community. In my opinion, it is no longer possible in 2021 that these Jews, who stood by our side in every test and help us every day, will find themselves second-class Jews when they visit Israel or choose to live there.”

Crucial to engage with groups across the spectrum

Ross, co-chairman of JPPI’s board of directors, laid out the three main challenges now facing Israel in the United States. The first, he said, is how to take advantage of the institutional ties that have been established in the military, intelligence and commercial areas. Second is the need for Israel to re-establish itself in the minds of Americans as not a partisan issue. And third, Israel, as the nation-state of the Jewish people, cannot be alienated from the largest Jewish community in the Diaspora.

He focuses on one of the main policy challenges facing Israel — that of China — since U.S. President Joe Biden calls it the most important American foreign-policy challenge. Ross maintains that it is important for Israel to create a set of boundaries in the relationship between itself and China, and that it is not in the U.S. interest to stop the high-tech sales between the two countries. He believes that the United States has an interest in Israel maintaining its relationship with China and talking to the Chinese explaining, for example, the risks for potential conflict in the region due to their actions with respect to Iran.

Finally, Ross said Herzog is perceived, among other things, as a first-rate analyst — someone who understands the nature of the Iranian challenge — adding that he “is an inspired choice to be ambassador to the United States.”

JPPI co-chair Eizenstat offered Herzog a series of recommendations, including understanding and identifying with the growing concerns over anti-Semitism in the United States; acknowledging legitimate criticism of Israeli policies as being part of international politics while at the same time making it clear that BDS crosses the line and seeks to delegitimize Israel as the nation-state of the Jewish people.

Furthermore, Eizenstat urged Herzog to reach out early to progressive caucuses in Congress, and listen to and engage with them. He also urged that the incoming ambassador meet with mainstream African-American groups, such as the NAACP and Black Lives Matter, and stress to them the nature of the coalition and that Israel is also a nation of color. Similarly, he encouraged reaching out to Hispanics — the fastest-growing minority in the United States, constituting 18 percent of the population.

Equally important, the new ambassador should talk with and get to know progressive Jewish groups such as J Street, “which was almost totally boycotted by the previous Israeli administration,” as well as to groups on the right, such as ZOA, and mainstream Jewish organizations.

Knesset member, opposition leader and head of the Likud Party Benjamin Netanyahu also greeted Herzog, saying, “I know Mike. I sought his help — with his experience, his skills, his integrity — during very important contacts I had with the United States government. I must tell you, he did not disappoint. He did the job in the most professional, clean and discreet way.

“This means that he has the necessary skills to be a loyal and excellent representative of the State of Israel,” said the longtime former prime minister. I want to wish him great success in a position that is important to all of us, vital to the State of Israel.”