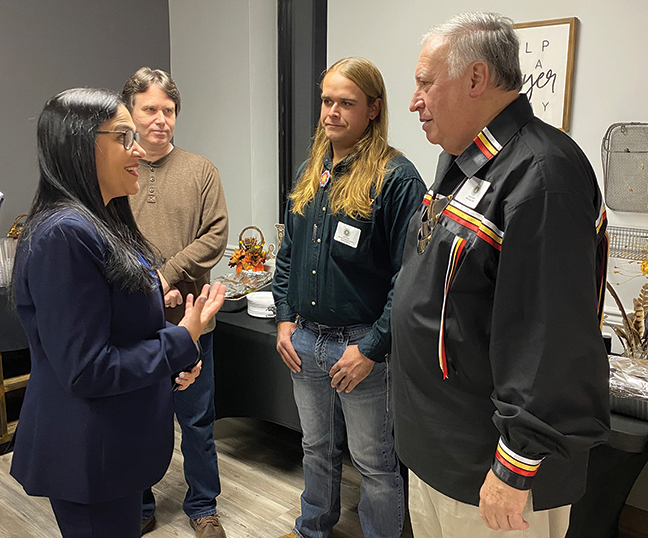 Cherokee issued a declaration of support for the “sovereign Jewish nation” of Israel and the recognition of Jerusalem as the eternal, undivided capital of Israel, Israel’s Consul General in Atlanta was unable to attend the presentation because it was on Shabbat in the middle of Sukkot.

On Nov. 18, Consul-General Anat Sultan-Dadon visited with the tribe and members of Huntsville’s Jewish community for an emotional evening of strengthening bonds between the two groups.

As a diplomat, “there are truly very few events that are as moving for me as this one,” she said.

She expressed Israel’s “sincere appreciation to you” for “a decision and a gesture that means a lot for the state of Israel, the nation-state of the Jewish people.”

She added, “there is much beauty in peoples coming together from different corners of the world.”

Over the summer, Seth Penn, deputy representative of the Red Wind Tribal District, approached Chief Larry Smith with the proposal to issue a resolution, and it was unanimously passed by the Tribal Council.

Penn said the declaration “was a political thing, but it was also a spiritual thing” as it meant “moving forward as one people with the Jewish people.”

Smith said the visit “meant a lot” to him personally and to the tribe. “This is something I never saw coming, and I just pray it grows, we have a relationship and go forward.”

He reiterated a statement he made at the September ceremony, that if there is any other group that can understand the struggles of Native Americans, it is the Jewish people.

Sultan-Dadon said “we know and acknowledge our past, what we have been through, our present and pride in who we are, and in that we find our commonality.”

Part of the commonality is being tied to a sacred place and having to fight for the rights to it as the indigenous people.

The resolution is also seen as an exercise of the tribe’s sovereignty, as its own political entity.

Penn said “we are proud to call the Jewish people our friends and family and we look forward to continuing to build and maintaining a strong, eternal relationship with them,” and urged people to “pray for the peace of Jerusalem” and “stand up for their rights to sovereignty.”

The dinner, catered by Chabad of Huntsville, was held at The Dwelling Place, a church which is known for its support of Israel. During the mingling before the meal, much of the conversation with Rabbi Moshe Cohen centered on the theft of a large menorah from outside Chabad earlier that week.

Sultan-Dadon said “we look forward to this being the first of future encounters.”

The consul general’s visit to Alabama included a stop in Birmingham, where she had lunch with leaders of the Birmingham Jewish Federation, and had an extended visit at the Birmingham Civil Rights Institute.

Charles Woods III, education program manager at the Institute, gave the consul general a guided tour of the museum.

Sultan-Dadon said an important aspect of the work of Israel’s Atlanta consulate is outreach to the African-American community. “There is a very important history of standing together, and the mutual understanding of each other’s struggles and challenges is incredibly important.”

Before the tour, Sultan-Dadon visited Kelly Ingram Park, the site of civil rights demonstrations in 1963. By coincidence, as she was there, Billy Planer of Atlanta, who runs Etgar 36, was leading a tour of civil rights sites. In addition to year-round civil rights tours in the South, Etgar 36 does a summer cross-country trip for Jewish teens, exploring a wide range of social issues.

In the park, Sultan-Dadon saw the series of statues commemorating the Children’s Crusade that changed the momentum of the civil rights movement in May 1963, and she also visited the Anne Frank tree in the park.

The park, which is called a “place of revolution and reconciliation,” was the site of a 2005 three-way signing of Birmingham’s sister cities in Israel and Jordan, Rosh Ha’Ayin and al-Karak.

She also made an impromptu visit to the memorial outside Sixteenth Street Baptist Church, where four girls were murdered in a Klan bombing in 1963. In 2015, then-Israeli Ambassador Ron Dermer made an official visit to the church and did a wreath-laying ceremony at the memorial, as did Daniel Ayalon in 2012 when he was deputy foreign minister.