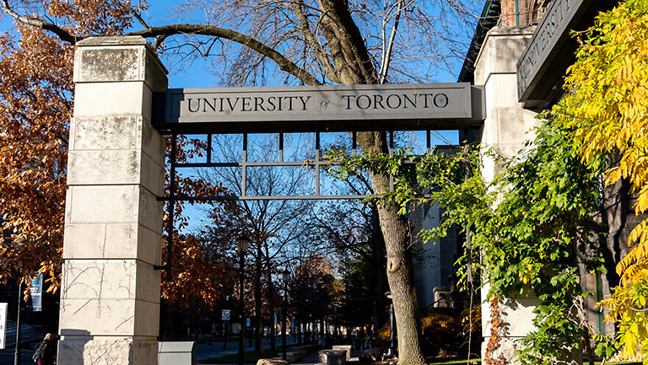 Toronto, Canada - November 9, 2020: Close up of University of Toronto sign.

The University of Toronto. Credit: JHVEPhoto/Shutterstock.

(JNS) — Just days before a report concerning anti-Semitism on campus is set to be released, the student union at a branch of the University of Toronto voted in favor of a radical BDS measure against Israel.

The resolution by the Scarborough Center Students Union, which was passed on Nov. 24, says, in part, that it will “refrain from engaging with organizations, services or participating in events that further normalize Israeli apartheid.” That includes “inviting speakers who are representing the Israel Defense Force or support the military occupation of Palestine, the displacement, incarceration and/or killing of Palestinian people.”

“Individuals with a history of service in the IDF but no current ties or support of the institution should not be held accountable for their required duty to serve,” it continues.

The resolution even takes aim at kosher-food options, saying: “Efforts should be made to source kosher food from organizations that do not normalize Israeli apartheid…” The wording adds that exceptions can be made if “no alternatives are available.”

It was met with immediate condemnation from Jewish student groups, communal leaders and university officials.

“I think it is an embarrassment to society,” said Rabbi Nechemia Deitsch, director of Chabad of Midtown in Toronto, which services the university population. “The fact that there is this hatred in the air is due completely to a lack of education.”

He told JNS that students are concerned, but that they are “very determined to stay strong and in all the moral values that Judaism stands for. They will continue to be a light upon the nations and on their communities.”

“Let’s be absolutely clear what the Scarborough Campus Students’ Union is demanding: Jewish students — and only Jewish students — must prove that they embrace particular political viewpoints to be ‘included’ and treated ‘equitably’ on campus,” said Douglas Sandoval, managing editor of CAMERA on Campus, which provides assistance to college and university students who are battling anti-Israel hatred on campus. “The union is even targeting how Jews get their kosher food. The moral perversity here is simply jaw-dropping.”

While the SCSU’s resolution states that it opposes “any form(s) of anti-Semitic remarks or rhetoric that seek to abuse the BDS movement as a method of discrimination against Jewish students,” Sandoval said their very actions prove otherwise.

“[T]he one good thing about it is that the union has plainly shown, for everyone to see, that BDS is anti-Semitic — just the latest expression of mankind’s oldest bigotry,” he said. “Under what circumstances is it acceptable for an ethnoreligious minority to be treated with such contempt on a North American university campus? I’m embarrassed for the school.”

On Nov. 29, the SCSU issued an apology about the kosher catering aspect of the resolution. It said that it will amend the policy to include exceptions allowing students and student groups to access kosher food on campus, reported The Star.

“We recognize the impact of the language regarding access to religious dietary necessities was not communicated correctly in line with our intentions and the feedback of students,” SCSU said in a statement. “We apologize for the distress that our miscommunication has caused the Jewish community on campus, and we understand their concerns.”

The student union added that the amendment to the resolution will be presented in December.

‘Anti-Semitism is not taken as seriously as racism’

In a post on Facebook, Hillel officials said a group of “courageous” Jewish students has been trying to “steer the union in a more principled direction. We are deeply disappointed by the union’s position and call on the executive to take immediate steps to reverse this shameful resolution.”

University of Toronto officials say that in passing this resolution, those involved have “not represented the best interests of all students at Scarborough and has set a dangerous precedent for future” decisions by the student union, according to a statement issued by Kelly Hannah-Moffat, vice president of people strategy, equity and culture, and Wisdom Tettey, vice president and principal of the University of Toronto Scarborough. Noting that everyone is entitled to their “own views on all issues,” the school believes “no member of our community — and no supplier to the university — should be compelled to share a particular viewpoint or perspective on action of any nation-state.”

University president Meric Gertler said that requiring kosher-food purveyors about their views on issues elsewhere in the world is “unacceptable.”

Students and faculty have complained that the school has not done enough to combat anti-Semitism and anti-Zionism on campus. Back in March, B’nai Brith Canada CEO Michael Mostyn chaired an hour-long town hall with students and faculty to discuss the situation. The meeting was covered by the Toronto Sun and included numerous students expressing their concerns.

According to the newspaper, one student said a classmate asked her where her horns were, while Howard Tenenbaum, a professor with the faculty of dentistry, summed up the atmosphere on campus this way: “Anti-Semitism is not taken as seriously as racism.”

B’nai Brith Canada also noted that because the SCSU controls clubs funding, room booking and many other aspects of student life at the Scarborough Campus, which has a smaller Jewish student body than the St. George campus, the motion effectively threatens to shut down Jewish life there.

A working group on anti-Semitism was convened by the university in December 2020; its report, along with the administration’s response, is expected to be released in early December.

According to Michael Levitt, president and CEO of Friends of Simon Wiesenthal Center, “the odious motion put forward by the Scarborough Campus Students’ Union is a brazen escalation of the long-standing problem of discrimination being faced by Jewish students and faculty members.”

His organization is set to meet with school officials in the coming days to address concerns of anti-Semitism and will urge them to adopt the International Holocaust Remembrance Alliance working definition of anti-Semitism. 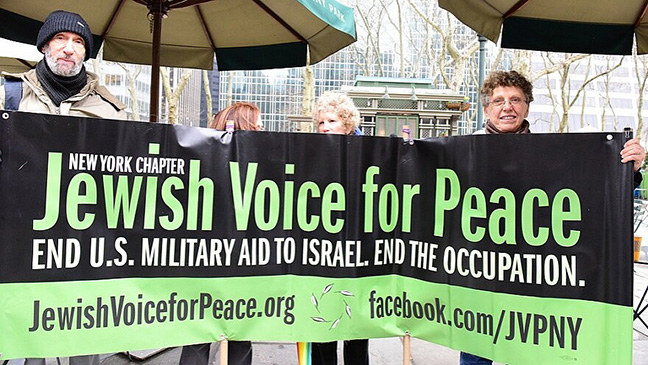