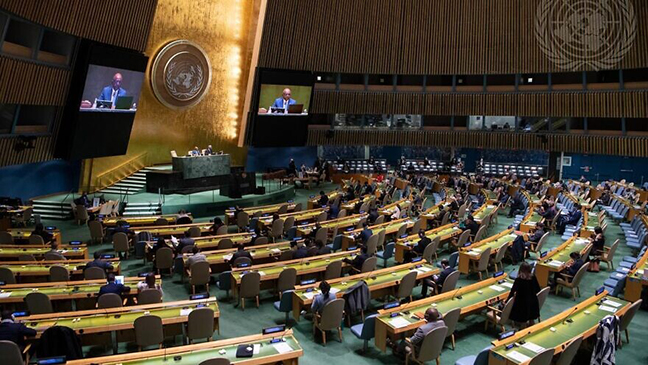 A wide view of the 30th plenary meeting of the General Assembly. Credit: UN Photo/Eskinder Debebe

(JNS) — The U.N. General Assembly passed three resolutions this week that targeted Israel, which brings the total to 14 resolutions being adopted this month that single out the Jewish state.

“The U.N’s assault on Israel with a torrent of one-sided resolutions is surreal,” said UN Watch executive director Hillel Neuer after the three resolutions were adopted on Dec. 1. “It’s absurd that in the year 2021, out of some 20 U.N. General Assembly resolutions that criticize countries, 70 percent are focused on one single country — Israel. What drives these lopsided condemnations is a powerful political agenda to demonize the Jewish state.”

One of the resolutions from Dec. 1 refers to the Temple Mount, Judaism’s holiest site, only by its Muslim name, “Haram al-Sharif.” Another resolution solely puts the blame on Israel for the lack of peace in the Middle East and makes no mention of terrorist attacks and human-rights violations by the Palestinian Authority, Hamas and Palestinian Islamic Jihad.

The resolutions were adopted two days after the United Nations held its annual “International Day of Solidarity with the Palestinian People” on Nov. 29.

Neuer said France, Germany, Sweden and other European Union states are expected to support almost all of the 14 resolutions against Israel.

He added that “the same European nations have failed to introduce a single UNGA resolution on the human-rights situation in China, Venezuela, Saudi Arabia, Cuba, Turkey, Pakistan, Vietnam, Algeria or on 170 other countries. Where’s the supposed E.U. concern for international law and human rights?”

UN Watch recently launched a detailed database that documents the U.N.’s bias against Israel. It revealed that since 2015, the General Assembly has passed 115 resolutions condemning Israel and only 45 against other countries.

The Conference of Presidents condemned the U.N. resolution omitting the Temple Mount designation.

“We are deeply disturbed by the deliberate and offensive omission of the ‘Temple Mount’ designation in the ‘Jerusalem resolution,’ passed by the United Nations General Assembly, which effectively denies both Jewish and Christian connection to one of the most sacred sites for all three faith communities,” said Dianne Lob, chair; William Daroff, CEO; and Malcolm Hoenlein, vice chair of the Conference of Presidents.

They emphasized that “the vote sets a dangerous moral precedent that is both historically inaccurate and detracts from critical efforts to promote inclusivity and peace in the region. We welcome the Biden administration and the governments of Australia, Canada, Hungary, Israel, Marshall Islands, Micronesia, Nauru and Palau for rejecting this shameful and false resolution, and call upon other nations to oppose resolutions that unfairly single out and condemn Israel while needlessly exacerbate political tensions.”