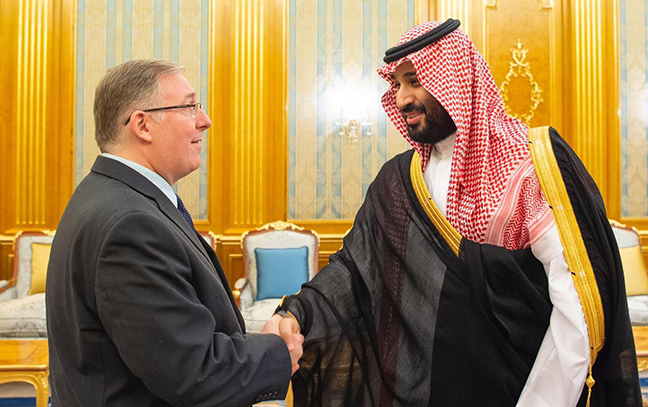 I have been a fan of Rosenberg and his writing since the first time he gave me a copy of one of his books years ago while attending the National Religious Broadcasters Convention in Nashville.  I don’t remember which book it was, but I do remember during the rest of that trip to the U.S., making sure to make time to read as much as I could, as often as I could. The book was so good, literally a page turner, that not only did I not want to put it down, but I felt that reading it alone in my hotel room, I was cheating on my wife — a voracious reader — by doing something so good without her.

Of course, I brought the book home and “confessed” my “cheating.”  My wife became a fan immediately as well, and from that point we assembled a library of all of Joel Rosenberg’s books published until that point.  But it didn’t stop there.  We told our friends, and in no time, copies of Joel Rosenberg books were flying between our neighbor’s homes.  It didn’t matter that people read many of them out of sequence.  The writing was so good. 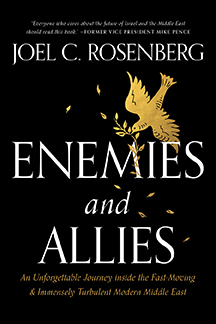 What’s unique and remarkable about this is less the books and how well written they are, but WHO we and our neighbors are.  As Orthodox Jews, living in the Judean mountains south of Jerusalem, it would be odd, to say the least, to have a library of books by one of America’s (and Israel’s) evangelical leaders who comes from a Jewish background.  Thus, the name Rosenberg. Not only that, because of who the author is, and a very clear Christian message through his writing, in some circles simply having and reading these books would be frowned upon.

“Enemies and Allies” is different.  It’s not a political thriller novel.  It is a factual recounting and personal observations of Rosenberg leading official delegations of fellow evangelical leaders to meet with leaders of some of the most significant Arab countries. Not only did they participate in an official delegation to Egypt, Jordan, the UAE and Saudi Arabia, but they did so at the invitation and as guests of these countries’ top leaders.

In the wake of the 2020 announcement of the Abraham Accords, normalizing relations between Israel and the UAE and Bahrain at first, quickly followed by Sudan and Morocco, Rosenberg’s latest book is the first with a unique insight as to the DNA of these historic achievements. “Enemies and Allies” takes the reader through the halls of the White House, Israeli Knesset, and palaces of the most significant Arab leaders in the Middle East.  Rosenberg’s outstanding writing, documentation of his firsthand experiences, and ability to communicate the background and significance of the events which he experienced at a level most can understand makes “Enemies and Allies” all the more important. He boils down many important issues throughout the Middle East so that one does not need a degree in Middle Eastern history to grasp what’s going on.

Unlike Rosenberg’s political thrillers, whose characters and events are based on real people and his unique ability to present realistic scenarios of things that have not happened (yet), but which very well could, “Enemies and Allies” is all based on real people, quoted and referenced, and personal experiences that connect historical background. While I look forward to reading more of his political thrillers, as a political analyst who has been shown tremendous grace at being afforded the relationships and experiences he has, Rosenberg has another important mission.

A little over a year ago he established All Israel News and All Arab News, portals to provide relevant news and other articles about Israel and the Arab world specifically to a Christian audience.  These sites synthesize a variety of events, personal reflections and other background, using the same analytical style that Rosenberg embodies in his novels.  In a world of decreasing attention span and lack of understanding of the background of much of how and why the Middle East is as it is, these sites take some of the best resources and present them alongside Rosenberg’s thoughtful insight, and the perspective of others.

During a visit to my home recently, rich in candid and interesting conversation, Rosenberg commented that he’d like to see more of my writing on All Israel News, and particularly from a personal perspective of being an American born, Orthodox Israeli Jew.  I’ve been privileged to share my insights with All Israel News for some months, but was unaware that, as of that point at least, I was the only Orthodox Jewish Israeli writing for the site.

In the Middle East, history and nuance are important.  Both “Enemies and Allies” and All Israel News and All Arab News are important extensions of Joel Rosenberg’s commitment to journalistic integrity.  One time, chatting by email in the midst of Israel’s four-in-a-row election season, I asked him as Israelis do with one another, for whom he voted, just out of curiosity and to learn how he made his calculations.  He replied that as a journalist, he couldn’t share such things because does not want to appear biased.  Respecting that but trying to get some insight, just a tidbit, I asked for something “off the record,” the way in which journalists get the best and juiciest bits of information. Nope, not Rosenberg. He’s maintaining his journalistic integrity by not sharing things like this, as well as details of off the record conversations with Arab and Israeli leaders.

Neither he personally, nor All Arab News and All Israel News are engaged in writing over-dramatized or misleading headlines as click bait.  Rather, they exist to provide important background and content to a significant audience, details that are frequently lost or misunderstood in other media outlets.  “Enemies and Allies” provides the historic context, and the news sites provide daily updates from a variety of sources that continue to help provide depth and understanding as events occur and relationships evolve throughout the Middle East.