(JNS) — The tragic death of Al Jazeera journalist Shireen Abu Akleh, who was killed last week in a firefight in the Palestinian town of Jenin, has prompted worldwide demonization of Israel that does not help the search for the truth of how Akleh died.

We have seen worldwide condemnation — or rather criminalization — of Israelis and Israeli leaders by nearly all media outlets, who have uncritically accepted the narrative of Israeli guilt and criminality proffered by the Palestinians. Yet regarding the Palestinian Authority’s refusal to conduct a joint investigation into the incident, to the point of refusing to produce the very bullet that killed Akleh, there has been worldwide silence.

This reflexive and all too common criminalization of Israel creates a false and defamatory narrative of Jewish violence and cruelty. This is nothing less than the promotion by international public opinion of the Palestinians’ campaign to resurrect their “cause” after a period of near-oblivion. To further this campaign, the P.A. will never consent to an objective examination of the evidence relating to Akleh’s death — likely for fear of what it might find.

Indeed, the Palestinians have already got what they wanted: clashes and violence in the streets of Jerusalem, which have been flooded with Palestinian flags. The Israeli reaction to the clashes during Akleh’s funeral in Jerusalem, moreover, proves the intellectual Douglas Murray’s thesis in his latest book that the West is its own worst enemy. Israel’s Public Security Minister Omer Barlev has set up a committee to investigate the conduct of Israel’s own police at the funeral, even though the Palestinians clearly intended to exploit the event in order to spark a demonstration or riot, which the police attempted to prevent even while defamatory slogans were shouted and stones thrown at them.

Media coverage of this shocking behavior was carefully censored. The brother of Akleh, for example, told those attempting to steal Akleh’s casket, “For God’s sake, let us put her in the car and finish the day.” It is not surprising that the global press refused to report this, choosing instead to portray the police response as either unprovoked or inspired by depraved cruelty. The BBC, CNN and all other media outlets with reporters at the scene painted the Israel Police in precisely the same defamatory light.

This capitulation to Palestinian violence and propaganda was not limited to the media. U.S. President Joe Biden’s Spokeswoman Jen Psaki called the images of Akleh’s funeral “very disturbing,” while the European Union said it was “deeply shocked.”

No one asked how the events actually unfolded, choosing instead to criminalize and demonize the Israel Police. Nor was there any interest in the day-to-day difficulties and hazards faced by the police, who are charged with the immensely difficult task of preventing terror attacks and violent clashes in a country that is permanently at war. Yet even their leaders have abandoned them. The police said they were merely trying to ensure an orderly funeral. Barlev, however, appeared — along with Israel’s enemies — to suspect otherwise, even though this is his own police force.

The obvious assumption in such a case, and in such a context, is that the police did not find themselves facing a funeral, but a Palestinian demonstration that threatened to become a riot. They has to confront a mob of people chanting slogans of hatred and revenge. The mob threw stones at them—and stones can kill. The police were in an explosive tactical and political situation in which, during Ramadan and after, Israel has been plagued by multiple terror attacks and violence on the Temple Mount. They reacted in a manner that, whatever an investigation may conclude, was understandable.

That an Israeli minister has forsaken his own police at a moment of violent and disproportionate international condemnation represents something dark and unusual. Certainly, Israel is a democratic state that is accountable for its behavior. It is logical for it to publicly provide a response to such a wave of condemnation. And this took place. Nonetheless, such an investigation takes resources away from the Israel Police at a difficult moment, after three weeks in which 19 Israeli civilians were murdered in terror attacks. They were killed in the name of the same flag that covered the streets of Jerusalem at Akleh’s funeral. It is not even necessary to ask what would happen if an Israeli citizen carried an Israeli flag through Ramallah — they would not last long.

It is perfectly legitimate for the U.S., E.U. and indeed Israel to call for a thorough investigation into the death of Akleh and the violence at her funeral. But such an investigation cannot be objective if the a priori delegitimization and demonization of the Israel Police and Israeli security forces in general continues. If it does, then any investigation will simply be another attempt to further the Palestinian leadership’s strategy of uprooting Israeli sovereignty and legitimacy in the international community.

Journalist Fiamma Nirenstein was a member of the Italian Parliament (2008-13), where she served as vice president of the Committee on Foreign Affairs in the Chamber of Deputies. She served in the Council of Europe in Strasbourg, and established and chaired the Committee for the Inquiry Into Anti-Semitism. A founding member of the international Friends of Israel Initiative, she has written 13 books, including “Israel Is Us” (2009). Currently, she is a fellow at the Jerusalem Center for Public Affairs. 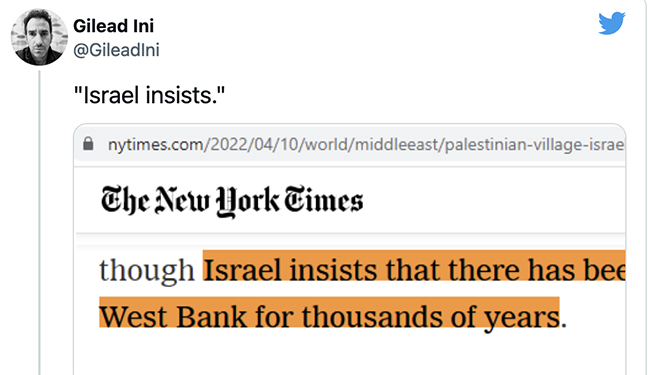