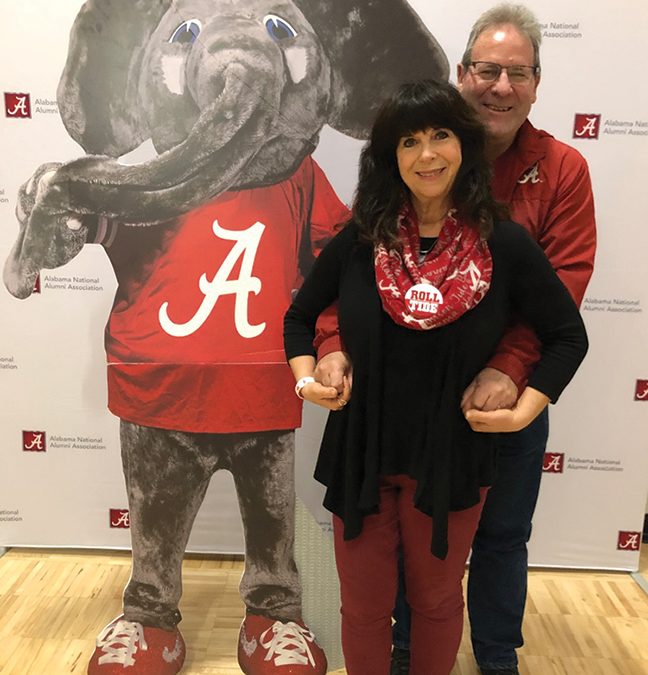 Truth, as the old saying goes, is stranger than fiction.

So… did you hear about the Israeli kibbutz girl who barely knew English who wound up as one of the halftime dancers during an Alabama football game at the height of the Bear Bryant era?

“It was surreal,” said Esti Applebaum, shaking her head and laughing about the experience more than 40 years later.

But maybe no more surreal than Hal Applebaum, an 18-year-old from Tuscaloosa, sitting down to dinner at Esti’s kibbutz five years earlier, and taking one look at the 16-year-old Israeli girl serving the food and deciding he was going to marry her.

And he did.  They got married in 1978 at Esti’s childhood home, Kibbutz Ma’ale HaHamisha.

That love-at-first-sight encounter launched a remarkable journey for the young couple that would take them back to Tuscaloosa, then back to Israel, Eugene, Ore., San Francisco and to Denver, where they live today.

Though it’s been a diverse journey, and they’ve had three sons along the way, wherever the Applebaums have gone they’ve made a big impact on Jewish life.

For the last 11 years, Hal has worked out of his Denver home as a senior vice president and managing director for the Jerusalem-based Jewish Agency for Israel, educating the American Jewish community about the agency’s work and raising money on its behalf.

Chatting via Zoom recently, Hal called it his dream job. He pointed with pride to the impact the Jewish Agency has had helping Jews immigrate to Israel, with more than 4 million immigrants over the past nine decades, deepening connections between the global Jewish community and Israel, and closing socio-economic gaps in Israeli society.

What brought them to Denver was a job Hal took as statewide executive director for Hillels of Colorado. Before that, he directed the Israel Center at the San Francisco Jewish Federation and also served as Hillel director at the University of Oregon.

Esti has been a superb and supportive partner along the way; teaching Hebrew and Judaic studies in synagogues and day schools, promoting Judaism, and educating about Israel and Israeli culture wherever they have gone.

After they were married and returned to Israel, the Applebaums lived there for 17 years.

They were founding members of Har Halutz, a community village in northern Israel affiliated with Reform Judaism. Serving as the first general secretary of the community (and employed at the time by the same Jewish Agency for Israel that he works for today) Hal often met with American groups who came to visit, always excited to welcome people from Alabama.

In 2001, they came back to the U.S. “In Israel, we had a tourism and seminar business that was all-consuming,” explained Hal. “We were working nonstop. We just needed a break from what we were doing. And my father had passed away suddenly a couple of years before, and we felt a strong pull to connect in a more meaningful way with the American side of the family.”

It also was a challenging time in Israel. The Palestinian leadership had just launched a devastating war of terror against Israel’s civilian population marked by repeated suicide bombings. “It affected our business. It affected our personal life. We wanted to take a break, which we felt would be temporary,” said Hal.

They left Israel intending to go back. But life in the U.S. turned out to be fulfilling as they found new ways to serve the Jewish people and work for Israel. “We found a lot of satisfaction. We also started facing college costs for our sons. Life just sort of happened.”

Now 65, there’s not only a yearning in Hal for Israel but also for Alabama.

He describes himself as a proud third generation Alabama Jew — one grandfather was born in Birmingham and most of the family from that generation built their lives in Alabama. “My friends who stayed in Alabama have roots and a sense of place I don’t have. But I have no regrets.”

This Jewish philanthropic leader had a great upbringing in Tuscaloosa.

His family had a successful retail shoe business, he had a grandfather who took him to Israel when he was 11, and he was the number one player on a Tuscaloosa High School tennis team that won the state championship.

In addition, at one point his family lived next door to Bryant, the legendary Alabama football coach, and his wife, Mary Harmon, and he’d spend time with them and swim in their pool.

Esti, also talking via Zoom, reflected on her life. Growing up on a kibbutz outside of Jerusalem, she assumed she’d live in Israel her whole life — and still misses her family and country.

Landing in Tuscaloosa shortly after they were married, Esti, who could barely speak English at the time, enrolled at the University of Alabama. “It was a culture shock.”

One thing she knew was that she didn’t like football. “I thought it was violent and aggressive.”

She became a theater and dance major, which is how she wound up dancing on the field at halftime. Just as people say “Israel works its magic,” so does Alabama football.

“It took a year or two, until I was completely immersed — and then I wound up loving it,” said Esti in perfect English.  “To this day, 40 years later, I still love Alabama football.”

And more than 40 years later, her husband still loves Israel — and the kibbutz girl who served him dinner.