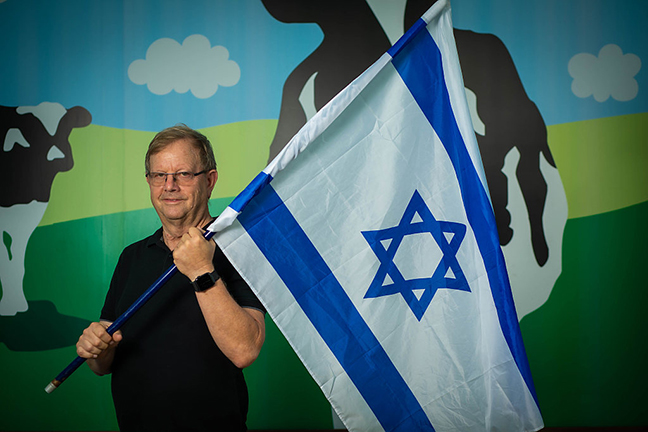 (JNS) — The ice-cream battle between Ben & Jerry’s and its Israeli distributor may have been resolved, but the repercussions continue to reverberate in what many considered a considerable loss for the BDS movement.

On June 29, Unilever — the parent company of Vermont-based Ben & Jerry’s ice-cream maker — announced that it had agreed to sell the rights to manufacture and distribute the brand in Israel, as well as in Judea and Samaria (also known as the West Bank), to its Israeli licensee, Avi Zinger, owner of American Quality Products, Ltd.

The decision comes after an almost yearlong standoff between Ben & Jerry’s and nearly all parts of the pro-Israel community, which had protested the company’s announcement in July 2021 that it would not renew its license with Zinger because it could not support its product being sold in “Occupied Palestinian Territory.”

The settlement also ends a lawsuit brought against Unilever by Zinger, which was filed on his behalf back in March by the Louis D. Brandeis Center for Human Rights Under Law.

“Today, those who promote cooperation and coexistence vanquished those who endorse bigotry, discrimination and hate,” Alyza Lewin, president of the Brandeis Center and one of the lead attorneys in the case, said in a statement. “BDS tried to stop Ben & Jerry’s from being sold in Israel. They lost.”

Zinger’s company will now have full ownership of Ben & Jerry’s Israel. The product will still utilize the Ben & Jerry’s name in Hebrew and Arabic, but it will no longer be allowed to use cartoon images of the founders, Ben Cohen and Jerry Greenfield, on its packaging.

The settlement gives Zinger’s company the right to produce and distribute Ben & Jerry’s ice-cream “for eternity,” according to Lewin, who added that it enables Zinger to “continue providing jobs for refugees, new immigrants and the disabled; economic opportunity for Palestinians; and support for Israeli-Palestinian coexistence programs and other human-rights initiatives.”

Zinger’s lawsuit, which was brought in the U.S. District Court of New Jersey where Unilever is headquartered, accused Ben & Jerry’s of violating American laws that prohibit anti-Israel boycotts, including the U.S. Export Control Reform Act, the U.S. Tax Code’s reporting requirements for activities related to boycotts, the U.S.-Israel Trade and Commercial Enhancement Act, and numerous other state anti-discrimination and anti-BDS laws.

It also alleged that Ben & Jerry’s directed AQP to violate Israel’s non-discrimination law, which prohibits discrimination in providing a product or public service on the basis of race, religion, nationality, place of origin, gender, sexual orientation, age and residence. It also would have violated another Israeli law prohibiting any person from knowingly calling for a boycott against Israel or an area under its control.

In a statement, Unilever said it had “used the opportunity of the past year to listen to perspectives on this complex and sensitive matter and believes this is the best outcome for Ben & Jerry’s in Israel. The review included extensive consultation over several months, including with the Israeli government.

It added: “Unilever rejects completely and repudiates unequivocally any form of discrimination or intolerance. Anti-Semitism has no place in any society. We have never expressed any support for the Boycott, Divestment, Sanctions (BDS) movement and have no intention of changing that position.”

For its part, Ben & Jerry’s board said on June 30 that it will no longer profit from Ben & Jerry’s sales in Israel and that “we continue to believe that it is inconsistent with Ben & Jerry’s values for our ice-cream to be sold in the occupied territory.”

‘They were looking for a way to resolve it’

Speaking to JNS on June 30, Lewin said that Zinger “personified Ben & Jerry’s commitment to peace and social justice” and called it “absurd” for the company to claim that his work is inconsistent with the company’s social-justice values, especially given how he’s fought for his employees, both Israeli and Palestinian.

“Avi Zinger has done so much more in terms of concrete projects to promote peace and coexistence than Ben & Jerry’s Vermont or BDS had ever done with their empty words,” stated Lewin. “He’s the one on the side of social justice.

“What this confirms,” she said, “is that BDS is really nothing but empty rhetoric and PR slogans with no appreciation or real concern for improving the lives of Palestinians.”

Lewin said she credits Unilever for understanding which side represented social justice, and that it shows in the company’s other engagements in Israel — the company has an estimated 2,000 employees in four manufacturing centers in the Jewish state.

Also praising Unilever is Zinger, who told i24News that “Unilever didn’t like the whole situation… Also, this is now almost a year, and during the whole time, the pressure against Unilever was building, getting more and more. They were looking for a way to resolve it, and they came up with the idea that this was something they can do without getting Ben & Jerry’s in Vermont involved.”

“This was their right and, actually, they did it,” he continued. “They came to me with the idea, with the offer, and it took us a while to finalize all the details. But everything was done in good faith and here we are.”

The Ben & Jerry’s company was founded in 1978 by Ben Cohen and Jerry Greenfield, who sought to use their product to promote their social-justice values.

Unilever acquired Ben & Jerry’s ice-cream in 2000, but the dessert maker’s independent board was allowed to continue to make decisions about its social mission. Unilever maintained the primary responsibility for financial and operational decisions, allowing it to enter into the new arrangement with Zinger.

‘Licked off more than they could chew’

Unilever CEO Alan Jope personally contacted and sent letters to numerous Jewish organizational leaders on June 29 to break the news that a deal had been made.

Eugene Kontorovich, director of international law at the Kohelet Policy Forum, who is widely regarded as the “intellectual architect” of anti-BDS laws, called the agreement “a huge win against those who think it’s legitimate to discriminate against Jews, which is the fundamental ideology of the BDS movement,” and for anti-BDS laws throughout the country.

“Unilever is yet another massive corporation that fell into the rhetorical traps of the boycott Israel movement, only to pull back after much embarrassment and expense,” he said in a statement. “Unilever’s move is a public slap-down to the board of Ben & Jerry’s, who have in essence had part of their brand taken out because they couldn’t manage it responsibly, or non-discriminatorily. It would appear that Ben and Jerry licked off more than they could chew.”

The Simon Wiesenthal Center, whose chairman of the board of governors, Nelson Peltz, was recently added to Unilever’s board after his company, Trian Fund Management LP, became the largest shareholder, celebrated the announcement.

“We commend Unilever for finally doing the right thing and putting an end to the anti-Israel, anti-Semitic and anti-peace boycott by extremists on Ben & Jerry’s board,” Rabbi Marvin Hier, founder and CEO of the Simon Wiesenthal Center, and Rabbi Abraham Cooper, its associate dean and director of social global action, said in a joint statement.

Cooper told JNS that while he knows he can’t change the ideology of the independent board in Vermont, he believes that they’re going to have to change what they’re doing in regards to supporting anti-Israel movements or continue to lose market share and sales revenue from the pro-Israel community.

“If, in fact, they’re going to plow profits here in the United States to help BDS, you can be sure that not just the Wiesenthal Center, but a lot of folks are going to be very active in encouraging people to buy Good Humor or Häagen-Dazs [brands].”

He added that Unilever’s statement about BDS should be noticed by other large corporations.

“Without overstating it, the fact that Unilever not only ended the boycott but labeled it as BDS, that’s a signal to the other companies that maybe this is something you don’t want to touch,” said Cooper.

Though he had not spoken to Peltz in recent days about Unilever, Cooper said he was certain that he took “an opportunity to express the concerns of our community in a way that, I think, no one else could.”

Among the many groups celebrating the settlement between Unilever and Zinger was the Conference of Presidents of Major American Jewish Organizations, Jewish Federations of North America, StandWithUs, B’nai Brith International, Israeli-American Coalition for Action and the Zionist Organization of America.

“This is a victory against discrimination and for dialogue and inclusion,” wrote Conference of Presidents chair Dianne Lob, along with CEO William Daroff and vice chair Malcolm Hoenlein, in a release. “It shows that allowing the BDS movement to guide policy is not in the financial interest of corporations. We hope those considering boycotting Israel will follow the lead of Airbnb — and now Unilever — and reverse course.”

Eric Fingerhut, president and CEO JFNA, released a statement saying “there is no place for the BDS movement or any other form of anti-Semitism in the corporate sector.”

StandWithUs CEO Roz Rothstein said in a release that Unilever’s decision is a “resounding defeat of BDS. This represents a victory for common sense and sends a message that discriminatory BDS campaigns will be vigorously fought through worldwide efforts against hatred towards the only Jewish state.”

The Israeli-American Coalition for Action said in a news release that the decision “represents a major victory over the anti-Israel, anti-Semitic BDS movement that seeks to destroy the Jewish state. We thank the state governors and treasurers across the United States who have boldly enforced local laws against boycotting Israel, helping convince Unilever to reverse the Ben & Jerry’s board action targeting Israel.”

The Zionist Organization of America celebrated the people and organizations that came together to put pressure on Unilever over the past year, though said in a news release that it is unfortunate that Ben & Jerry’s in the United States is “continuing its anti-Semitic Israel-hating ways, including by reportedly requiring new employees to watch hostile-to-Israel video lectures by anti-Israel BDS leaders, as part of its employees’ training.”

Lewin, meanwhile, hopes this episode should be a lesson to other corporations who are being pressured by the BDS movement to stop doing business with Israel.

“I hope that other corporations will take a look at this and decide not to follow BDS. If we have to, we’ll try to deal with other corporations like we’ve dealt with this one,” she said. “It would be very nice if the impact of this case would deter other companies from following in Ben & Jerry’s footsteps.”

Mike Wagenheim contributed to this story.