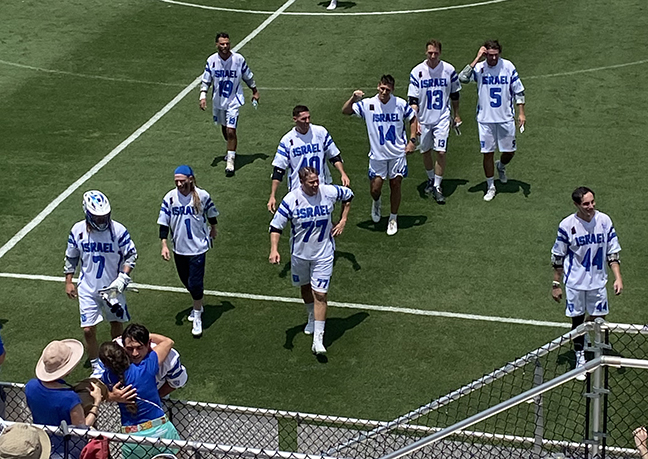 (Israel InSight) — Israel opened its World Games competitions with a thrilling, come from behind victory in men’s lacrosse on July 8, but was unable to keep the momentum going on July 9.

Israel defeated Japan, 21-20, overcoming a four-goal deficit with less than four minutes to go in regulation, then scoring the golden goal in overtime. Ian Kadish scored the winning goal, assisted by Yackov Silberlicht.

The match began with a moment of silence following the assassination of former Japanese prime minister Shinzo Abe. Abe was regarded as a great friend of Israel, deepening ties between the two countries.

Japan started the scoring just 22 seconds in, but Israel took its first lead, 5-4, with 2:37 left in the first, on a goal by Kadish. After the first quarter ended in a 6-6 tie, Israel was battling from behind the rest of the way, down 18-13 with 7 minutes to go.

After Junichi Suzuki scored with 3:59 remining to give Japan a 20-16 lead, Israel took over, with a goal by Matthew Popeck, two by Zachary Pall, and the game-tying goal by Isaac Bock with 27 seconds left.

Israeli goalie Eric Fischer turned away a shot by Kazuki Obana with six seconds left, then Obana missed a shot on Japan’s opening possession in overtime, before Kadish ended it with his goal.

On July 9, Israel lost to the Haudenosaunee Confederacy, 16-12, as the offense went cold for several long stretches in the 97-degree heat. Kadish opened the scoring with 7:34 remaining in the first period, but after a Daniel Applebaum goal with 4:30 remaining in the period to cut the Haudenosaunee lead to 4-3, the Israeli sticks went mostly silent. A Popeck goal to make it 6-4 mid-way through the second period was the only goal scored in that frame.

After the Haudenosaunee grew their lead to 7-4 in the third, Israel scored two quick goals by Pall and Popeck, then Bock had a goal as the period ended to cut the deficit to 10-8, but the Haudenosaunee were able to pull away in the fourth, with six goals to Israel’s four. For the match, Israel out-shot the Haudenosaunee, 40-37, but was unable to connect on many of them.

Through the first two matches, Kadish leads Israel in scoring with nine goals. Popeck has eight, while Pall and Bock each have five.

Germany, Great Britain, the United States and Australia are in the other division. 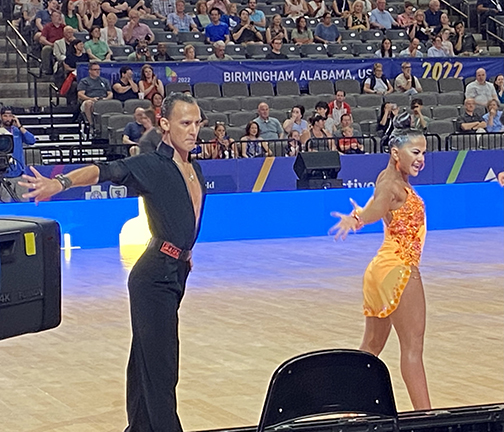 In the DanceSport Latin competition on July 8, Israelis Liana Odikadze and Alexey Korobchenko did not advance to the semifinals, placing 16th in a field of 20 couples in the Latin competition.

The 20 couples were divided into four groups of five and competed in five different styles of Latin dance — Samba, Cha Cha Cha, Rumba, Paso Doble and Jive. The couples were identified throughout the competition by their couple number, not by name or country. After the first five dances, there were 14 couples named to the seminfinals, then six in the medal round.

France took the bronze, Germany won silver, and the gold was won by Anna Matus and Gabriele Pasquale Goffredo of Moldova.

The Odikadze family moved to Israel from Georgia, where Boris Odikadze represented the Soviet team and trained many championship-level athletes. He is now president of the Israel DanceSport Federation, while his wife, Rosanna, is head coach of the Latin team.

In 2015, Liana Odikadze was world champion in Under 21 Latin dance, with Artyom Liaskovsky as her partner. They were coached by Dirk Heidemann, and this was the first-ever world title for Israel in DanceSport.

Korobchenko represented Russia until the age of 18, and after meeting Odikadze, became her dance partner and moved to Israel.