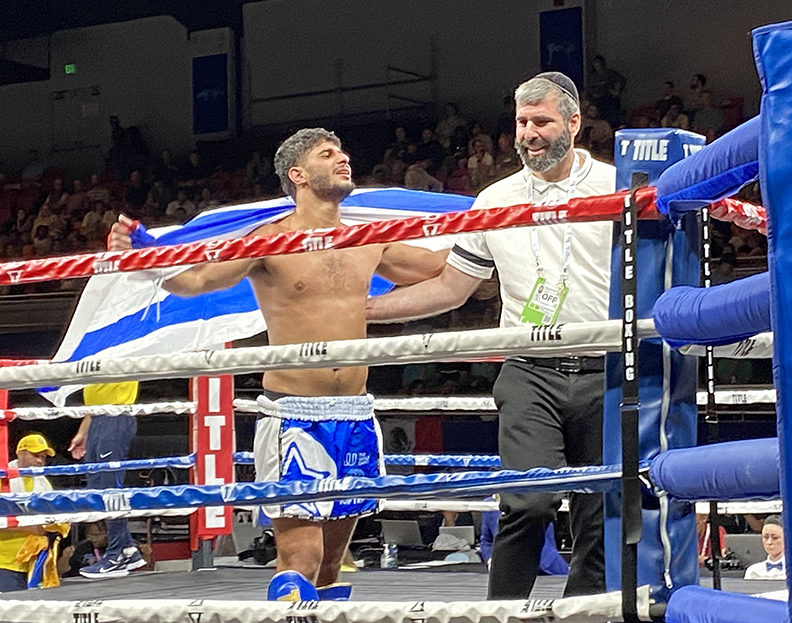 (Israel InSight) — On the first day of the 2022 World Games in Birmingham, Team Israel took a group photo at the city’s iconic statue of Vulcan, the Roman god of the forge.

Miniature statues of Vulcan are being presented to athletes along with their medals, and with three days left in the World Games, several of those statues — and the accompanying medals — will be heading to Israel. As of the morning of July 15, Israel has won four golds and one silver.

Much of the haul is courtesy of Daria Atamanov, competing in rhythmic gymnastics. Her first gold came on June 12 in individual ball, with her score of 34.900 easily topping Sofia Raffaeli of Italy, who came in second with 33.550. 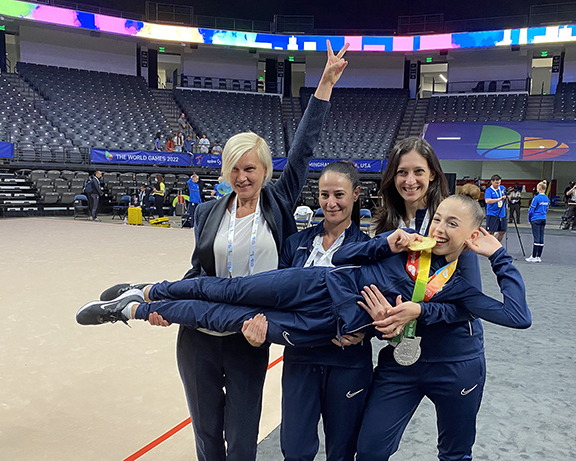 In clubs on July 13, Atamanov received silver as Raffaeli won the gold by 0.4, and in ribbon Atamanov edged Bulgaria’s Boryana Kaleyn by 0.1 for the gold, electrifying the crowd as she was the last to perform.

She also competed in individual hoop, placing second after qualifying, but coming in sixth in the finals.

Coach Ayelet Zussman said she knew the scores Atamanov needed to win, but Atamanov doesn’t pay attention to the scores and did not know what she needed. Zussman said that her routines have a high degree of difficulty, so “if she does well, she wins medals.”

Katz was injured just before the World Games and was unable to travel to the competition.

The evening of July 14 turned quite memorable for Team Israel, as two kickboxers won gold an hour apart, just after most of the team attended a celebration at Temple Beth-El that was organized by Birmingham’s Jewish community, including all the local synagogues and Jewish institutions. Many team members went straight from the celebration to the kickboxing venue.

Shir Cohen, in the women’s 52kg category, defeated Poland’s Iwona Nieroda-Zdziebko in the gold medal bout, 3-0. In the preliminary rounds, she defeated Lillie Helton of the United States on a 3-0 decision, then beat Klara Strnadova of the Czech Republic, also 3-0.

In the men’s 75kg division, Or Moshe defeated Ukraine’s Vitalii Dubina, 3-0, for the gold. Because of the war in Ukraine, the Ukrainian team has been “adopted” as a crowd favorite. Russia was barred from the World Games.

In the preliminary rounds, Moshe beat Austin Bybee of the U.S., 3-0, and won a split decision, 2-1, over Alessio Zeloni of Italy.

Both the men’s and women’s lacrosse teams qualified for the eight-team World Games field, where the Sixes format debuted. The matches are played with six per side and a 30-second shot clock on a smaller field.

The men opened on July 8 by overcoming a four-goal deficit with three minutes to go against Japan, tying the match at 20, then winning on a golden goal in overtime. But their first-ever sixes win internationally would be the last for the tournament, as they fell to the Haudenosaunee Confederacy, 16-12, and Canada, 26-7. They lost the seventh-place match, 16-11, to Germany.

For one member of the women’s team, it was a homecoming. Olivia Mannon grew up in Birmingham, and at the community event on July 14 commented that it was surreal to come back as part of Team Israel and have the team welcomed by the community in the room where she had her Bat Mitzvah party.

On July 14, Guy Firer qualified for the finals in men’s wakeboard freestyle. The finals will be on July 16.

In Wushu, Anastasia Chiriliuc placed fifth in the five-person field for women’s Taolu Jianshu, and fourth in Qiangshu, for a fifth place overall finish.

Liana Odikadze and Alexey Korobchenko did not advance to the semifinals in DanceSport on July 8, placing 16th in a field of 20 couples in the Latin competition.

Though the World Games end on July 17, many Israeli athletes have not yet competed. The slate for July 15 includes jiu-jitsu, sport climbing and acrobatics, along with Muay Thai, where Nili Block will compete.

As part of the World Games festivities, there was also a ceremony on July 14 involving representatives from Israel, Bahrain, the United Arab Emirates and Morocco, as a “peace tree” is being planted in Birmingham to celebrate the Abraham Accords.

The World Games in Birmingham have emphasized peace and reconciliation around the world, taking inspiration from Birmingham’s transition over the last 60 years since it was the focal point of civil rights battles.