The Red Heifers’ miraculous return to Israel: What’s the significance? 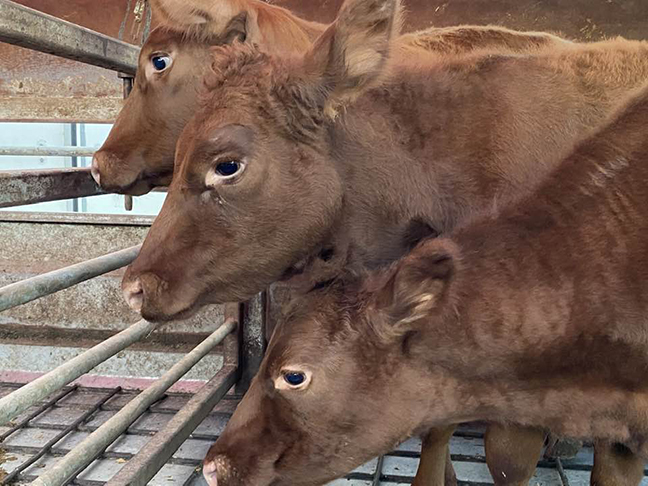 American Airlines flight 146 touched down at Israel’s Ben Gurion airport on time, arriving from New York’s JFK airport as one of the dozens of flights that arrive in Israel from the United States daily. While a regularly scheduled flight, among the passengers there were five whose arrival in Israel made it one of the most celebrated and certainly unique flights in Israeli history.

What was special about the flight is that the five unique passengers were traveling in the cargo section. It was the first time in nearly 2000 years that Israel has been blessed with the presence of not just one red heifer, but five, all arriving together. People who read their Bibles know that red heifers are mentioned in Numbers 19, but their significance has been shrouded for nearly 2000 years since the destruction of the Second Temple.

Jews read the verses longingly, praying for the opportunity to be able to rebuild the Temple and, with it, the ritual purification from the ashes of a red heifer needed to resume the Temple services. But for two millennia, the whole idea was simply a fantasy, until last year when these five red heifers were born in Texas, and now, their arrival in Israel.

Through a series of miracles overlaying technology and even the Covid pandemic, these five were found, checked head to toe, and remain unblemished which qualifies them for service. They arrived not quite a year old. As long as they don’t grow any white or black hairs, and remain unblemished, in just over a year they will qualify for the ritual purification process needed to resume Temple service.

In modern cattle raising, its customary to tag all calves within days of their birth. Doing so would be considered a blemish that would disqualify the red calves. So, how these calves remained untagged is just one of the incredible miracles that made this all possible.

There are different perspectives about the significance of the red heifers’ arrival as it relates to rebuilding the Temple. Some say that now the Temple can be rebuilt. Jews have prayed for that daily for nearly 2000 years. Some say that their arrival is the heralding of the Temple being rebuilt, a nuanced difference. And not mutually exclusive, some see the red heifers’ arrival as laying the foundation for the arrival of the Messiah, and end times among Christians. Either way, what is clear is that even if the Temple were to be rebuilt tomorrow, or descend from the heavens as some believe (since God can do anything and the restoration of the Temple is among the prophesies related to the return of the Jewish people to Jerusalem), without the red heifers the Temple service cannot be reinstated because they are necessary in the ritual purification that’s required for all Jews involved.

Regardless of the cause and effect, what is sure is that now there’s a possibility, the first time since the year 70 CE, that Temple service can be restored. I tend to be of the school that whenever and however it does happen, it’s all in God’s hands. This is just a key ingredient needed to make it all happen. A big one. That alone is significant, and a rare glimpse of Biblical prophesy in our modern time.

A few dozen Israeli Jews and Christians participated in the heifers’ arrival ceremony. The excitement was palpable even among the workers on the loading dock who understood the significance of the moment. In addition to my reporting about it, there were a few others present, but strangely no national Israeli media. The story caught on nevertheless, and became a topic generating wide interest.

The red heifer is first mentioned in Numbers 19, “Tell the Israelites to bring you a red heifer without defect or blemish and that has never been under a yoke.” But it’s been more than just a Biblical verse for many. One farmer who raised the cows, guided by Numbers 19, is a devout Christian who was so moved by the opportunity that he gave four of the cows as a gift, just to be part of it.

Today, all Jews are assumed to be ritually impure. While in everyday life in the modern day this status does not have much of a practical effect, this type of impurity prevents one from entering the Temple. That’s not yet a practical consideration, but it could be.

One might think that there’s no precedent for non-Jews to be connected, much less actively involved, with the restoration of the red heifers to Israel. However, its not only not unique, but past involvement of non-Jews providing a red heifer was documented in the Talmud.

The story goes that a non-Jew named Dama ben-Netina was visited by people from the Temple, seeking a gem believed that he had and which was necessary for the High Priest’s ephod (breastplate). When they appealed to him, and despite the offer of a large sum to do so, he refused. His father was sleeping on the key to the box holding the gems when the guests from Jerusalem arrived, and he did not want to disturb his father’s rest. As a reward for honoring his father, a red heifer was born into ben-Netina’s herd the following year and he was able to sell it for the equivalent to money he would have earned if he had sold them the gems.

With the red heifers’ arrival, it’s worth taking time to review Numbers 19 because the theoretical Biblical obligation that had not been practiced for two millennia just got much closer to being practical.

The great 12th century rabbi, Maimonides, held that there were only nine red heifers used through the Second Temple era, and the arrival of the tenth red heifer “would only be found and sacrificed when King Messiah was ready to appear.” Jews and Christians see different nuance in the red heifer, but the significance is great all the same. The arrival of a possible tenth perfect red heifer as just happened signifies hope for the Messiah’s imminent arrival, and the Temple’s rebuilding.

So if you’re wondering what’s all the talk about the arrival of five cows in Israel last month, you need look no further. Hear and understand more about this, including the backstory on the Inspiration from Zion podcast.