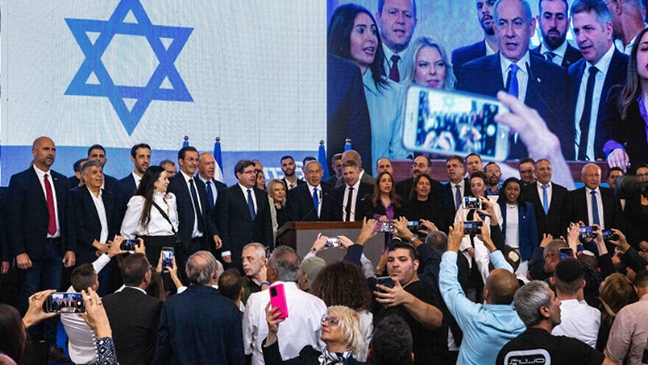 Head of the Likud party MK Benjamin Netanyahu addresses his supporters on the night of the Israeli elections, at the party headquarters in Jerusalem, November 2, 2022. Photo by Olivier Fitoussi/Flash90

(JNS) — Apparently in Israel, the fifth time is the charm. After repeated attempts by the opposition, by defectors from his own right-wing bloc, by the prosecution and the Supreme Court to prevent embattled former Prime Minister Benjamin Netanyahu from ruling, the electorate finally ended Israel’s protracted political deadlock by voting overwhelmingly in favor of Netanyahu and his natural — and loyal — right-wing allies.

With 87.6 percent of the paper ballots counted, Netanyahu’s bloc is likely to surge to as many as 65 seats in the 120-member Knesset. The number represents a stable parliamentary majority. By contrast, Israel’s left-wing collapsed to barely 45 seats — a massive 20-seat gap between the right-wing and left-wing blocs. Parties comprising the outgoing coalition secured only 50 Knesset mandates this time around, including an Arab party affiliated with the Muslim Brotherhood.

Even if the distribution of mandates shifts slightly as the final votes are counted, the results are clear: Netanyahu is returning to power for a third stretch as head of government, after a year in the opposition.

The vote was a national referendum on the fitness of Netanyahu — Israel’s longest-serving prime minister — as the man best suited for the top job. It was also a referendum on the tremendous damage caused cycle after election cycle by opposing parliamentarians who conspired to block the people’s choice from serving as prime minister.

In a major surprise, turnout was the highest in years. Many had said that Israelis were growing tired of going to the polls each year and might boycott the voting booths. On the contrary, Israelis embraced their hyper-democracy and voted overwhelmingly to return stability to the electoral system. And the voters proved once again that Israel is a traditional, center-right country.

Despite all the efforts to oust him, it is now clear that Netanyahu has not lost any support across five consecutive elections. And now, the right-wing government he is poised to assemble represents the most stable alignment he has ever secured. There is virtually zero chance that Netanyahu will attempt to move towards a so-called unity alignment with parties that have tried to prevent him from serving as premier. Doing so would bring a Trojan horse and the opposition directly into his cabinet. Stability depends on forming an alliance with parties that actually support Netanyahu’s candidacy.

The Religious Zionist Party, and Orthodox parties Shas and United Torah Judaism, are each expected to recommend Netanyahu as prime minister when President Isaac Herzog begins consultations with party leaders, possibly as early as Sunday. Netanyahu should have little trouble negotiating coalition agreements and distributing cabinet portfolios. With only four parties in the coalition, there will be more than enough ministries to apportion among the ideologically-aligned allies.

After securing more than twice as many Knesset mandates as any other party in the alignment, Netanyahu’s Likud will likely hold the most senior cabinet offices, including the coveted Defense and Foreign ministry posts.

Having 100 percent of the cabinet ministries headed by members of Israel’s right-wing will produce an unprecedented era in the state’s history. The outgoing alignment, led by alternate prime ministers Naftali Bennett and Yair Lapid, brought the left wing from the backbenches of the opposition into the key government ministries, where many introduced progressive agendas that challenge the fabric of Israel as a traditional Jewish state and an emerging regional superpower.

In addition, the Bennett-Lapid alliance brought a self-declared anti-Zionist Arab party into government for the first time. Without the Ra’am Party, the anti-Netanyahu bloc could not have assembled its bare 1-seat majority in June 2021. The ideologically disparate alliance lasted barely a year to the day, with Ra’am wavering in its support of the government during major Israeli security operations in Gaza, as well as in Judea and Samaria.

Ra’am’s unprecedented participation in government was a major source of contention for Israel’s traditional voter base and contributed to the present right-wing resurgence.

The surprise electoral surges in support during this fifth round both occurred on the right wing.

In the first, the Religious Zionist Party, once a fringe group in Israeli politics, soared to become the third-largest party in the Knesset with 14 mandates. The party, a technical bloc of smaller right-wing factions, is led by longtime parliamentarian Bezalel Smotrich. Second on the candidates list is up-and-coming political firebrand Itamar Ben-Gvir, a former supporter of the banned Kach political party.

While arousing controversy among many detractors, Ben-Gvir has garnered tremendous support from young voters who feel disenfranchised by longtime political leaders. He is calling for enhanced security, greater protections for soldiers and police officers operating against enemies in the field, and tougher conditions for terrorists sitting in Israeli prisons. The growing support for his views is itself a referendum on security policies carried out by a left-wing political and defense establishment, which led to a dramatic increase in terror in the year since Netanyahu left office.

The second surge in support came in the nation’s two Orthodox sectors. Both the Ashkenazi United Torah Judaism party and the Sephardic Shas party secured mandate totals that exceeded the pre-election forecasts. In particular, Shas soared by three mandates up to 11 seats on Election Day. The Orthodox communities typically have low voter turnout. The sudden high turnout gives the Orthodox parties representation matching their growing share of the population.

The election of a broad right-wing government is a clear rejection of the progressive values Yair Lapid and his left-wing allies attempted to foist upon the electorate — without a clear mandate to do so. In particular, the failure of the far-left Meretz Party to cross the electoral threshold is a stinging defeat for the progressive camp. The left-wing Labor party barely crossed the threshold to receive the four-mandate minimum, a historic low for Israel’s former ruling party.

Members of the left-wing are now turning their animus on left-wing leader Lapid for cannibalizing the votes of the smaller parties in his bloc. And while Yesh Atid did improve to 24 seats, up from 17 in the previous election, an eight-seat gap behind Likud is not enough to convince anyone in Israel that Lapid deserves to remain in the prime minister’s chair that he co-opted as a “caretaker” once Naftali Bennett resigned.

Naftali Bennett and Yair Lapid now both hold the consecutive distinctions of being the shortest-lasting prime ministers in the state’s history. Bennett has since resigned from politics altogether. Lapid is now set to become head of the opposition, where he will continue his endless campaign to delegitimize Netanyahu.

Lapid is likely to be sitting in the opposition for a long time. Unlike previous alignments, the incoming Netanyahu-led right-wing government has great potential to last a complete four-year term. After years of instability, a full term is just what Israelis need to secure their national interests.

Any attempts to delegitimize Netanyahu or his right-wing allies would be an affront to the voting public who have definitively ended Israel’s political deadlock. In contrast, it was the left wing that used every tool at its disposal to break precedents and hijack Israel’s democratic processes. In a fair and democratic election, the public has finally rejected the anti-Netanyahu bloc’s efforts and sent a clear message that the left-wing and Arab parties belong on the benches of the opposition.

Once the dust settles, Netanyahu will need to quickly set his policy agendas. Issues that his government will need to address include mounting Palestinian violence, Iran’s pursuit of nuclear weapons, the Abraham Accords agreements, and rapidly rising costs of housing and living.

Another will be to try and heal the rifts caused by Israel’s repeat election cycles. With strong governance, Israel may not enter another such cycle for at least four years. 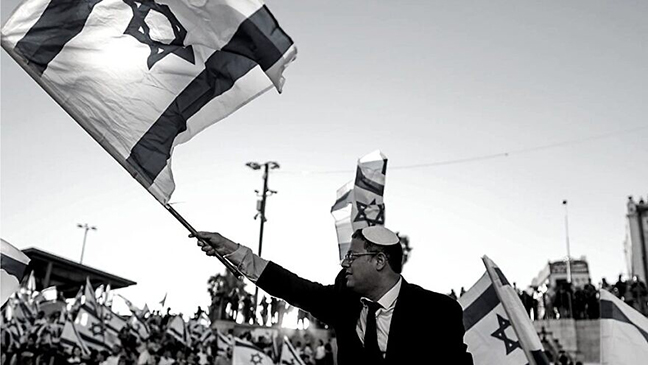 Why Itamar Ben-Gvir is gaining popularity, and why the left calls him a racist