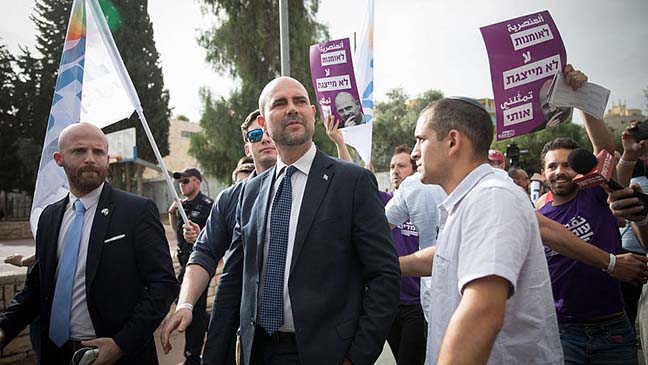 Temporary Minister of Justice and the only gay member of the Likud Party, Amir Ochana, attends the annual Gay Pride Parade in Jerusalem on June 6, 2019. Photo by Noam Revkin Fenton/Flash90.

Temporary Minister of Justice and the only gay member of the Likud Party, Amir Ochana, attends the annual Gay Pride Parade in Jerusalem on June 6, 2019. Photo by Noam Revkin Fenton/Flash90.

(JNS.org) — The irony is so great that it’s almost too obvious. The very week that a milestone was achieved in the state of Israel when a gay man became a cabinet minister, a leading gay organization in the United States banned Jewish symbols from its annual pride march so as to signal their hatred for Israel. For the intersectional left, all peoples have rights, except, that is, those deemed to be privileged oppressors, like Jews. So in their bizzaro view of the world, the most progressive state in the Middle East is, by definition, beyond the pale and the only established country in the world that is deserving of destruction.

The juxtaposition of these two events could be just put down to an example of ideological madness. But this matters because the question of whether Israel is a reactionary haven of oppression rather than the progressive country that it is has caused many young Jews to be alienated from Zionism. Yet as the appointment of Amir Ohana as Israel’s minister of justice proves, the entire argument put forward by the Jewish state’s foes is nothing but a lie. Israel isn’t just a democracy and the only Jewish state on the planet. It’s also the most liberal country in its part of the world with respect to human rights, while those who are fighting to destroy it are fervent opponents of freedom.

For many young people, being seen as a supporter of progressive causes is essential to their social survival. The myth that Israel is an apartheid state and that its Palestinian foes are an indigenous people resisting colonial tyrants is a powerful weapon in the arsenal of the anti-Semitic BDS movement, as well as undermines the ties of the young to the organized pro-Israel community.

At the core of these arguments are the claims of intersectionalism that hold that all struggles for equality against oppressive regimes are linked. In that way, some on the left make the astonishing claim that the Palestinian war to destroy Israel is analogous to the fight for civil rights in the United States. Yet as crazy as the claim that the blood-soaked terrorists of Hamas and Fatah are the moral equivalents of Dr. Martin Luther King Jr. may be, the attempt to link the battle for gay rights to that of the Palestinians is insane.

As is the case with the rest of the Arab and Muslim world, gays who reveal their orientation in Palestinian society put themselves in great danger. Should their identity become known, they might be subjected to beatings, imprisonment and death. That’s why many gay Palestinians try to flee to the freedom of Israel.

Split as it is between secular, traditional deeply religious sectors of society, Israel is not any more immune from ordinary prejudices than any other free country. But gays, like everyone else in Israel, enjoy equal rights. They serve in the army, hold public offices and can live freely. But as Amir Ohana proved this week, they can also aspire to high office.

Prime Minister Benjamin Netanyahu’s appointment of Ohana is temporary and will only last until a new government is formed after the Sept. 17 election. But it’s a significant step that shows just how open a society Israel has become as well as giving the lie to the notion that Netanyahu is assisting the ultra-Orthodox in creating a purely halachic state. Indeed, the fact that Ohana is not a member of a left-wing party but a Likud stalwart is shocking to some people. But as he has pointed out, just because he’s gay doesn’t mean he doesn’t care deeply about Israel’s security and regards defending all of its people against those who wish to eradicate their homeland as his main priority.

It should be noted that in making this appointment, Netanyahu did something that no American president has done. No American gay has ever held as high a cabinet post as Ohana, who will also serve on the smaller security cabinet. Though some of Netanyahu’s ultra-Orthodox allies are not happy about having Ohana in such a powerful position, there’s no question that this won’t be his only cabinet post. He will likely be a force in Israeli politics for some time to come.

The example he sets is a powerful one because he is tough-minded Likudnik with a resume that includes stints as an army officer and as a member of the Shin Bet security service. He is deeply resented by hard-core Israeli left wingers who despise him almost as much as his ally Netanyahu.

The fact that Ohana is a Jew of Moroccan descent — and like more than half of Israel’s Jews a person of “color,” according to intersectional theory — makes the notion that he is not a leader of a diverse democracy even more of a canard.

Left-wing Israel haters say that citing Israel’s acceptance of gays in its society is “pinkwashing” or an effort to cover up its treatment of Palestinians by changing the subject to gay rights. But the illogical arguments about “pinkwashing” show the intellectual bankruptcy of intersectional thinkers. Israel treats gays well because it is a democracy and a free society, not as a public-relations tactic. For supporters of gay rights to seek Israel’s destruction while giving aid and comfort to nationalist and Islamist Palestinian groups that oppress and murder gays is as ludicrous as it is harmful to the cause of human rights.

Rather, it is those who would ban Jewish symbols from events like the Washington, D.C. “Dyke March” or the Chicago gay pride parade in 2017 who need to be called to account for singling out Jews for exclusion. Such groups may pretend to be progressive, but they, like all those who practice hate and anti-Semitism, are fundamentally illiberal.

The idea that there is something illiberal about supporting Zionism — the national self-determination movement of the Jewish people — is a big lie that has been foisted on young liberal Jews. If Jewish students and activists want to be true progressives, then they must be Zionists.