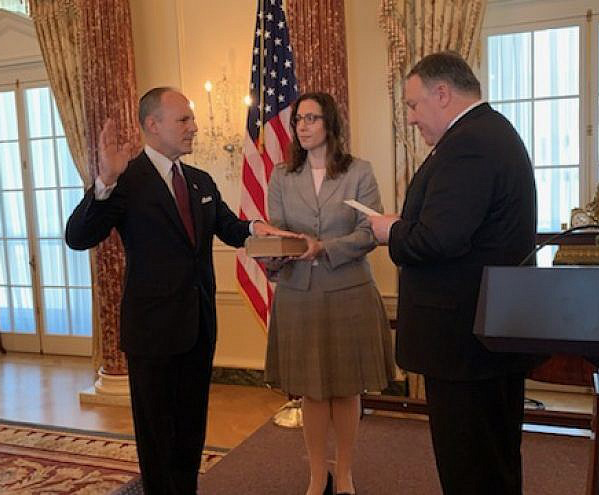 U.S. Special Envoy for Monitoring and Combating Anti-Semitism Elan Carr is sworn in on a Hebrew Bible by U.S. Secretary of State Mike Pompeo on April 11, 2019. Credit: Josh Katzen/JNS.

Elan Carr, the United States Special Envoy to Monitor and Combat Anti-Semitism, will speak at a program of the recently-formed Atlanta Israel Coalition on Sept. 15.

“Stopping Anti-Semitism, Anti-Zionism, Hate and Intolerance” will be at 6 p.m. at the Atlanta Jewish Academy in Sandy Springs. A reception for patrons and community sponsors will precede the event.

In April, Carr was sworn in as special envoy by Secretary of State Mike Pompeo. Pompeo noted that Carr is a veteran of the Iraq war and was chosen for “fierceness and vigor that he’ll bring to combating anti-Semitism.” In his role, Carr advises the Secretary of State and is responsible for directing U.S. policies and projects aimed at countering anti-Semitism throughout the world.

Carr grew up in New York and was educated at a Jewish day school, traveling to Israel annually. He has recognized the Alpha Epsilon Pi chapter at the University of California, Berkeley, for helping to shape his Jewish identity.

After graduation, he earned a law degree from Northwestern University. Carr then practiced litigation at a prominent New York law firm and, in the 1990s, assisted in creating Israel’s initial public defender’s office.

In Iraq, where he served until 2004, along with analyzing threats and recommending actions, Carr served as a judge advocate in the American military’s judicial system, prosecuting enemy combatants before Iraqi judges at the Central Criminal Court. He has received multiple awards and commendations for his nearly two decades of military service.

As the son of Iraqi Jewish refugees who fled persecution, Carr speaks Hebrew and the Iraqi dialect of Arabic. While deployed in Iraq, he met with remnants of the Jewish community there and led Jewish services in the former presidential palace of Saddam Hussein in Baghdad.

After returning to America from Iraq, Carr served as a criminal gang prosecutor with the Los Angeles County Deputy District Attorney’s office.

Carr was the international president of the Jewish fraternity Alpha Epsilon Pi, served on the National Council of the American Israel Public Affairs Committee and was a voting member of the Conference of Presidents of Major American Jewish Organizations.

The Atlanta Israel Coalition was formed last year to unite the pro-Israel community in Atlanta and beyond, through educational and community events. Founder Cheryl Dorchinsky said the group’s mission is to be “a gathering place for multi-faceted conversations that combat media bias, a connector to foster a spirit of cooperation amongst pro-Israel organizations and a means in which to amplify our collective pro-Israel missions.”

As a coalition, “our voices are louder, our light shines brighter and we can be a greater force for good within our communities and across the globe,” she said.

Their first event was held on Jan. 31, featuring Kay Wilson and the screening of “Black Forest,” a documentary about a 2010 terror attack in Israel and the year-long hunt for the perpetrators. About 10 months after the attack, American tourist Kristine Luken was stabbed to death while Wilson, her tour guide, managed to survive despite being hacked a dozen times with a machete.

Tickets to the Sept. 15 event are $10, free for students. Patron tickets are $100, and sponsorships are available.