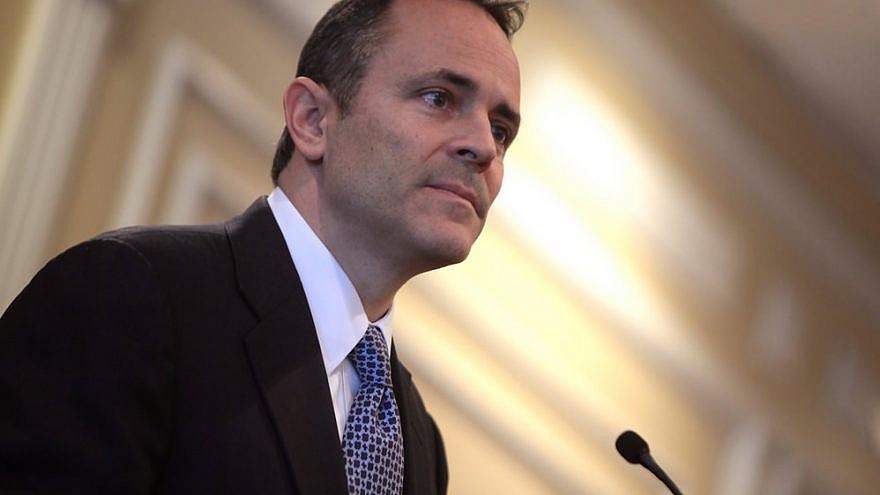 From Staff and Wire Reports

Christians United for Israel, America’s largest pro-Israel advocacy group, has joined Jewish organizations in commending the state of Kentucky for becoming one of the growing number of states that have passed measures to thwart the anti-Israel Boycott, Divestment and Sanctions movement.

Recent legislation, which Governor Matt Bevin signed on Aug. 27, codified into law an executive order that Bevin had issued last November to prohibit awarding state contracts to contractors who participate in the BDS movement.

BDS is an inherently anti-Semitic movement that targets the world’s only Jewish state and seeks its demise through economic strangulation and isolation.

Several weeks ago, as the Kentucky measure was being finalized, Gov. Bevin tweeted, “Kentucky condemns the #BDS movement and refuses to tolerate boycott-related tactics used to threaten the sovereignty and security of @Israel or other allies of the United States.”

“BDS is economic terrorism,” said Hagee. “It is a movement intended to do with boycotts, divestments and sanctions what terrorists seek to do with bombs, missiles and bullets: destroy Israel. But just like all anti-Semites who’ve come before them, the BDS movement will fail.”

“Kentucky’s action means that more than half the country has enacted legislation or policies targeting the anti-Semitic effort to boycott, divest from or sanction Israel. We look forward to advancing similar policies across the country and will not stop until the door is shut to BDS in every state in the union,” CUFI Action Fund Chairwoman Sandra Parker added at the time.

Most state anti-BDS laws prohibit the state from signing contracts with companies that actively participate in boycotts of Israel, though in many cases the boycott ban does not specifically reference Israel, but is phrased as involving any allied nation or nation with which there is a free trade agreement. Most laws also specify the ban applies to companies larger than a certain number of employees, not to individuals.

For example, Kentucky’s law applies to contracts over $100,000 with firms of at least five employees.

The nation’s first anti-BDS law was passed by South Carolina during then-governor Nikki Haley’s tenure. Haley would go on to become one of Israel’s most passionate and effective advocates during her time as President Trump’s ambassador to the United Nations.

In Kentucky and other states that have adopted similar anti-BDS legislation or policies, pro-Israel Christians have worked with Jewish leaders to support these initiatives. In Alabama, for example, some of the state’s most influential Jews worked tirelessly with Christian leaders, teaming up to encourage the state’s legislature to pass one of the toughest anti-BDS laws in the country.

While such anti-BDS measures have been adopted by a range of states, they tend to enjoy their strongest support in the South and other areas that have a dominant Evangelical Christian presence.

This is because many Christian leaders see the restoration of the Jews to their Biblical homeland and the rebirth of Israel as a modern Jewish state as the fulfillment of Biblical prophecy. They also draw their inspiration to support Israel and the Jewish people from Genesis 12:3: “I will bless those who bless ye….”

“We, as Jews, should be grateful for the pro-Israel activities of our Christian brothers and sisters,” observed one long-time Jewish leader in the Deep South. “If it weren’t for their involvement and advocacy, these important anti-BDS measures probably would not have such strong support.”