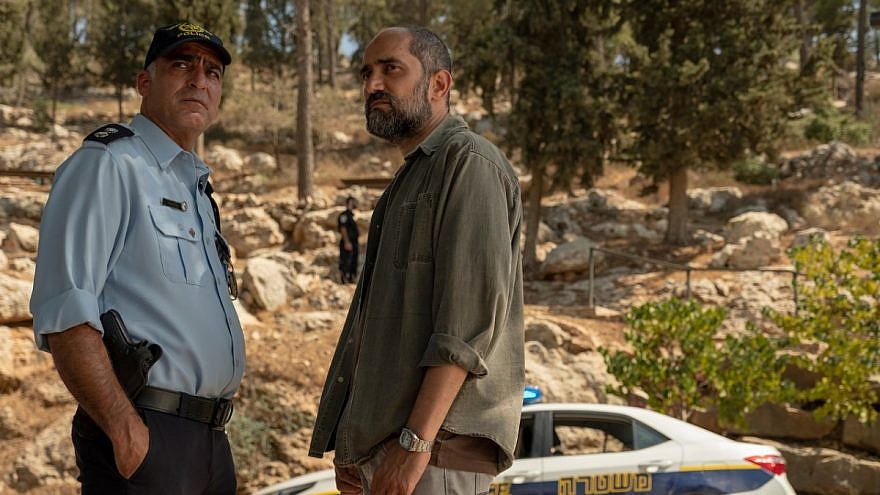 A member of the Israeli police and a Shin Bet Israeli security officer stand next to each other in a scene in HBO’s “Our Boys.” Credit: HBO.

(JNS) The brutal murder of Muhammad Abu Khdeir by three extremist Jews is a story that deserves to be told. The same can be said for the account of the swift and efficient manner in which his murderers were tracked down by Israel’s security services, and ultimately convicted and given harsh sentences.

The exclusive focus on that bestial crime—the 16-year-old Palestinian Arab resident of the Jerusalem neighborhood of Shuafat was kidnapped, beaten unconscious and then burned to death while still alive in June 2014—is the point of the HBO series “Our Boys,” produced by the Keshet Media Group that runs Israel’s Channel 12.

The show has understandably raised the hackles of many Israelis; however, the problem with “Our Boys” isn’t that it airs some of Israel’s dirty laundry. If that were the only substantive criticism to be made of the show, then the furor over it—it was denounced by Israeli Prime Minister Benjamin Netanyahu as “anti-Semitic” — wouldn’t be justified.

Documenting the transgressions of a few Jews, as well as the diligent efforts of their compatriots to catch and punish them, is no insult to the Jewish people. Viewed merely as an entry in the “true crime” genre or as a police procedural, it could be judged favorably as a well-acted and meticulously produced document of the incident, even if the glacial pace of the miniseries is problematic. And, indeed, that is the frame of reference for most of the critical reception from American TV critics of the show that debuted last month and, as of this writing, is halfway through its 10-episode run on the cable-television network.

Others will see it as yet another example of Israel’s flourishing television industry that has produced Netflix hits like “Fauda” and “Shtisel,” as well as providing the inspiration for shows like “Homeland.” But many of those who usually take special pride in seeing Israeli TV shows get such wide exposure aren’t cheering “Our Boys.”

The anger that the show has generated isn’t so much rooted in the fact that it depicts Jewish murderers or that their victim was a Palestinian Arab. It is the context out of which this one deplorable incident was pulled, and the painfully obvious political motivations of its producers and writers that is at question. And on that score, the artistic merit of “Our Boys” — and its avowed goal of examining the sources of hate crimes — cannot justify the manipulative agenda that it serves.

The summer of 2014 was a time of trauma for the people of Israel. In June of that year, a Hamas terror cell operating on the West Bank kidnapped three Israeli teenage boys and murdered them in cold blood. The 18-day search for the boys brought the Jewish state together in prayer for their safe return to their grieving parents; it was a time of national unity. The discovery of their bodies was a shocking reminder of the brutality of Israel’s enemies.

In response, three Jews violated not merely the laws of Israel, but of their faith. They decided to answer cruelty with cruelty, kidnapping a random Arab boy and killing him in a manner that provoked outrage and shame. The Shin Bet security service, which would not catch the killers of the three Israelis until September, quickly tracked them down and did its best to eliminate the Hamas terror network operating in the West Bank.

Seemingly secure in its Gaza fortress and with a weapon (terror tunnels dug under the border) in its arsenal that most Israelis were unaware of, Hamas then escalated the conflict by firing an enormous barrage of rockets at Israelis towns and cities. Though Netanyahu was reluctant to order the Israel Defense Forces to go into Gaza to attack the missile sites, Hamas — whose real agenda was to undermine Palestinian Authority leader Mahmoud Abbas’s corrupt rule over the West Bank — forced his hand with continued ceasefire violations, and by attempting to use the tunnels to unleash terror squads into Israel to kidnap and murder more Israelis.

The result was 50 days of war that forced much of Israel’s population to spend their days dashing in and out of air-raid shelters as the rocket barrage threatened a large part of the country, including Tel Aviv and Jerusalem. Only after desperate fighting against Hamas terrorists, who shamelessly used civilians as human shields, and after the Obama administration placed pressure on Israel to hold its fire, did the Islamist group that governs Gaza as an independent Palestinian state in all but name, decide to stand down.

So Israelis can be forgiven for thinking that there is something wrong with the fact that the sole focus of the only international television show that seeks to depict these events rests on the murder of Muhammad Abu Khdeir.

The plight of the three Israeli boys who were murdered is of little concern to “Our Boys,” except to provide incitement of hatred against Arabs. Hamas is also absent from the narrative. Palestinians are just helpless oppressed victims who are the objects of irrational, hatred from religious Mizrahi Jews like those killers.

The point of each episode is to depict the two sides of the conflict as morally equivalent with each people no less prone to mob violence and intolerance than the other.

That is true to the extent that we are all humans deserving of respect and capable of hate. But the show depicts Israeli society as being far more responsible for the cliché about a cycle of violence than the less powerful Palestinians. The series is, as one ecstatic writer for the Israeli newspaper Haaretz wrote, “an unashamedly liberal show that could have been ripped from the pages of Haaretz,” which is to say that it adopts the tone of hostility to the Jewish state that is the keynote to the vast majority of articles published there (it also sometimes runs opinions columns from me). It embodies the politics of Israel’s liberal Ashkenazi elites and considers the only suitable topic for discussion an examination of Israel’s alleged sins.

Though Israel’s failings shouldn’t be considered out of bounds for discussion, the Israeli left seems to think that the role of hate and violence in Palestinian political culture is not to be mentioned. Thus, while “Our Boys” treats the three Jewish murderers as somehow a natural product of Israeli society, they don’t mention that while such people are reviled by almost all Israelis and locked away (two received life terms, while one minor who was as old as his victim got 20 years), Palestinians treat those who murder Jews as heroes. They even pay them.

Of the three Hamas members who slaughtered the three Israeli boys, two were killed when they resisted capture. The third is serving three life terms in prison. But the families of all three get generous pensions from the supposedly moderate Palestinian Authority as a reward for their evil deed.

Should it matter that the cold-blooded murder of children is aberrant behavior among Israelis while considered normative and praiseworthy among Palestinians?

If there is ever to be peace, then it must matter. But to the mindset of those who seek only to blame Israel and to downplay the ongoing Palestinian violence against Jews that continues to this day, it is information that must be repressed.

A warts-and-all portrayal of Israel is not inherently anti-Semitic. Free countries are capable of introspection and an open discussion of their flaws, in addition to an examination of the motivations of those who commit terrible crimes.

But only an insignificant tiny fragment of Israeli society believes that the murder of the Palestinian boy could be defended. That most Palestinians and their governments don’t merely rationalize the killings of Israeli children but treat such crimes as acts of heroism cannot be ignored. That is exactly what “Our Boys” does, and it’s this point — and not its dramatized account of Israelis committing murder — that is truly outrageous.

The broadcast of this series isn’t likely to alter public opinion in the United States. The five episodes that have already aired averaged a small American audience of approximately 153,000 viewers. Contrast that with the 13.6 million that watched the series finale of HBO’s mega-hit “Game of Thrones.” It’s possible to conclude that the only people who are actually watching “Our Boys” are people who are already so vested in Israel and the Middle East that they are willing to sit through hour-long episodes entirely in Hebrew and Arabic, with English subtitles.

Friends of Israel are not wrong to view the show with resentment. Whatever artistic merit it might possess, it will chiefly be remembered as one more contribution of the Israeli arts community to the double standards and prejudice to which their country is subjected by its real foes.