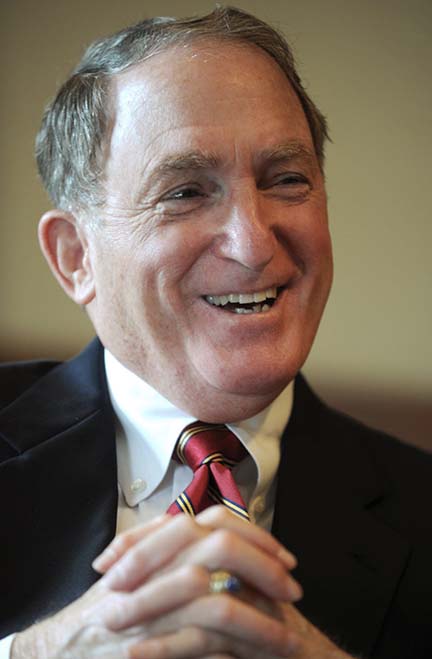 Retired four-star Marine General Charles Krulak, a former Commandant of the Marine Corps and member of the Joint Chiefs of Staff, jokes that he keeps failing at retirement.

Those who care deeply about Israel and the U.S.-Israel alliance should be glad. Because the General, now in his 70s, has become a powerful advocate for Israel, using his time, vast web of connections, experience and leadership skills to advance the well-being of what he and so many others see as America’s best and most reliable friend in the Middle East.

Krulak, after a long and distinguished military career and a successful post-military career in business and banking, has settled permanently in Birmingham. He and his wife Zandi decided to settle in Birmingham after the General came to Alabama to do a stint as president of Birmingham-Southern College.

“I love my adopted city, especially the warmth of the people and the can-do civic spirit that permeates the air,” explains Krulak, who is known as “Gen K” to his many friends and admirers. “And I’m busier than ever volunteering for local and national causes that are important to me.”

One organization in particular has corralled the General — the US Israel Education Association. This is a small Birmingham-based organization that thanks in part to the General’s leadership is making an international impact. As a hands-on board member, educator, fundraiser and advisor to Executive Director Heather Johnston, this retired military leader is playing a key role in advancing the U.S.-Israel relationship through several USIEA initiatives.

In fact, he just got back from Israel where he served as a resource for two back-to-back USIEA trips  — one that included Auburn University basketball coach Bruce Pearl and one that included four key members of Congress. “The itineraries were non-stop, powerful and educational, and every single participant gained a deeper understanding of Israel’s importance to the U.S.”

“Gen K’s” passion for Israel stems from the tapestry of his life.

His father’s parents were Jewish immigrants from Eastern Europe. They chose to assimilate into the American mainstream, gradually shedding their Judaism. Krulak’s dad — Victor Krulak, a legendary Marine general himself — married a Christian woman and Charles and his siblings were raised in the Christian faith. However, he never loses sight of his Jewish origins.

For example, whenever discussions about the Holocaust come up, General Krulak quietly notes that some of his Jewish relatives were among those murdered by the Nazis, and had there been an Israel at that time — a sovereign Jewish state to which Jews could flee — millions of European Jews, including members of his own family, might have been saved.

In the 1960s, Krulak’s attachment to Israel deepened significantly. “Life” magazine enlisted famed Israeli general Moshe Dayan to go to Vietnam to report on the war. Krulak, a young captain at the time, was Dayan’s escort. They spent much time together and a lasting friendship was built.

As Krulak ascended the Marine Corps ladder on his way to becoming Commandant, he came to see first-hand the many ways that the military relationship between the U.S. and Israel not only benefited both countries, but also enhanced the security of the free world. He would become a passionate admirer of the Israel Defense Forces.

Upon moving to Birmingham in 2011 to assume the presidency of Birmingham-Southern College, the General reached out to the Birmingham Jewish Federation, building key relationships, becoming a generous donor to the Federation’s annual fundraising campaign, and working with the Federation to attract more Jewish students to Birmingham-Southern. In recognition of his dedication to Israel and outreach to the Jewish community, he was honored by State of Israel Bonds at a Jewish community event.

“I’m so grateful that I’ve developed so many wonderful Jewish friendships in Birmingham. I also believe that as a Christian, it is my sacred duty, based on Genesis 12:3 (‘I will bless them that bless thee….’), to support Israel and the Jewish people.”

It was a Christian, Heather Johnston, who got General Krulak involved in USIEA. Johnston, who has become internationally-known through her work on behalf of Israel, is the organization’s founder as well as executive director. “I call her Hurricane Heather,” the General says, smiling. “I’ve never met anyone more dedicated to Israel, more tenacious or more inspirational. She is a true Christian who honors God and walks the walk.”

Johnston and others who work closely with “Gen K” are continually inspired by his energy, wisdom and zest for life. And they have no doubt that as he continues to fail at retirement, he’s going to keep battling for Israel.

“This tiny democracy, this wonderful ally, this miraculous country deserves our continued support,” says Krulak. “Israel and the Jewish people are up against some difficult forces these days — continued misrepresentation of Israel; the hideous anti-Semitic Boycott, Divestment and Sanctions movement; Iran and its terrorist proxies, and growing anti-Semitism.

“We can’t afford to be still.”

Richard Friedman will be concluding his long-time career as executive director of the Birmingham Jewish Federation this year and joining the staffs of Israel InSight magazine and the US Israel Education Association.