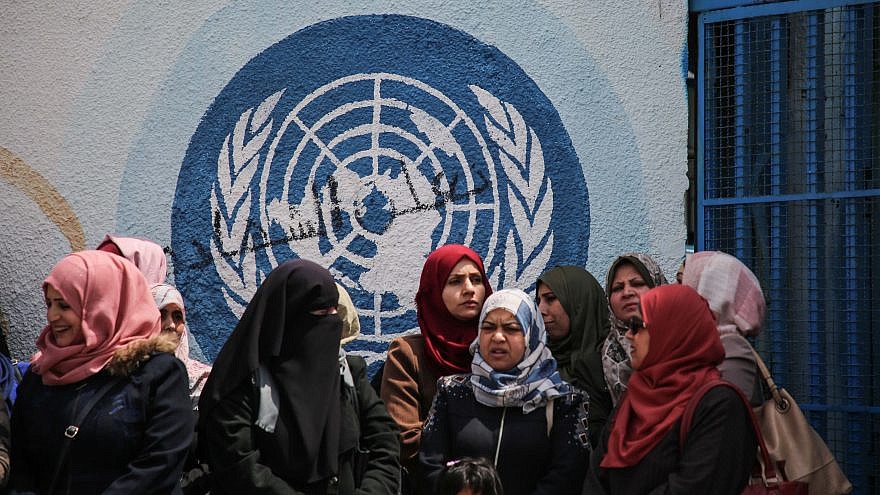 UNRWA staff members protest against UNRWA cuts outside the UNRWA offices in Gaza City on April 14, 2019. Photo by Hassan Jedi/Flash90

(JNS) — Hundreds of Palestinian refugees demonstrated outside the Canadian Embassy in Beirut on Sept. 5 to request asylum in Canada or the European Union, the second such protest in the last month. The most surprising aspect of these demonstrations is that they have been so long in coming. Only now, after more than 70 years, are Palestinians publicly protesting the fact that they alone, of all the world’s refugees, are denied the most basic of refugee rights — the right to seek resettlement in a safe third country.

All other refugees worldwide are handled by the U.N. High Commissioner for Refugees, which resettles tens of thousands of refugees in third countries every year. But Palestinian refugees aren’t allowed to apply to UNHCR; they are handled by the U.N. Relief and Works Agency, an agency created exclusively for them. And UNRWA hasn’t resettled a single refugee in its 70 years of existence.

The only option it offers the refugees and their descendants is eternal limbo: awaiting a “return” to Israel that will never happen. Thus it’s unsurprising that the protesters also assailed UNRWA for depriving them of “their most basic rights.”

Moreover, this refusal to grant Palestinians a right of resettlement enjoys the full support of so-called human-rights organizations and self-proclaimed advocates of human rights like the European Union. Thus it’s equally unsurprising that groups like Amnesty and Human Rights Watch completely ignored the demonstration.

Of course, one could legitimately argue (as I frequently have) that most Palestinians simply aren’t genuine refugees. Granted, those who demonstrated in Lebanon face discrimination due to their nationality: Not only are they denied citizenship, but as the Associated Press noted, they have “no access to public services, limited employment opportunities and no rights to ownership.”

But they’ve never faced the kind of threat that would drive them to flee. Most Palestinians in Lebanon — like most of those in the West Bank, Gaza and Jordan — were born there and have lived there all their lives. And the 1951 Refugee Convention explicitly defines a refugee only as someone who has fled his country due to “well-founded fear” of persecution or, if he’s stateless, is “outside the country of his former habitual residence as a result of” such a fear. So it’s understandable that even Palestinians who manage to reach Western countries and apply for asylum there are usually rejected, unless they’re from war-torn Syria.

Yet no Western country actually makes the argument that Palestinians aren’t real refugees; they all accept UNRWA’s definition of refugeehood — an inherited status bequeathed to every new generation of Palestinians in perpetuity even if the “refugees” have citizenship in their country of residence, like most of those in Jordan, and even if they reside in what the United Nations itself has recognized as the Palestinian state, like all those living in the West Bank and Gaza. And as long as the West insists on defining Palestinians as refugees, it has an obligation to grant them the same rights as other refugees, including the right of resettlement.

Moreover, resettlement is what many of the refugees themselves want — and not just in Lebanon. Repeated polls show that more than 40 percent of Gazans want to emigrate (the figure hit 45 percent in one 2018 poll), as do around 20 percent of West Bankers. And many of these would-be émigrés are certainly refugees, given that more than 70 percent of Gazans and almost 30 percent of West Bankers are registered as refugees, and that refugees are generally among the worst-off members of Palestinian society. Both the Palestinian Authority and Hamas have deliberately kept them in squalid camps and denied them basic services to generate Western sympathy for the demand that they all be resettled in Israel.

So why has the West, with ardent support from “human rights” organizations, continued to deny Palestinian refugees a basic refugee right that they themselves want to exercise? The answer can be found in an astonishing conversation that journalist Yoav Sorek recounted in Mosaic back in 2014. He and a colleague asked an official from ECHO, the E.U.’s humanitarian aid agency, why it didn’t help Gazans who so desired to resettle in other countries. The official replied, “Because if they leave, it’d be like releasing Israel from its responsibility for the ‘nakba‘,” the Palestinian term (meaning “catastrophe”) for the refugee crisis spawned by the Arabs’ war to prevent Israel’s establishment in 1948.

In other words, the West has kept Palestinian refugees in miserable limbo for 70 years and deprived them of their basic right to resettlement in order to hold a gun to Israel’s head: Either make enough political concessions to the Palestinians and/or Arab states that they’ll deign to grant citizenship to their own brethren, or risk being flooded by millions of “refugees” and their descendants, who will destroy the Jewish state demographically. Just like the Palestinian Authority, the West has been treating these Palestinians as political game pieces rather than human beings with needs, wants and rights of their own. And as the protests in Lebanon show, Palestinians are increasingly fed up with this role.

Any resettlement program would have to be led by an international agency like UNHCR. Though an Israeli official ludicrously asserted in August that Israel is actively promoting emigration from Gaza, in reality, this isn’t something Israel can do much about. As I’ve explained in more detail elsewhere, neither Palestinians nor other countries would feel comfortable cooperating with Israel as part of such an effort.

But what Israel and its supporters can and should do is wage a full-throated campaign to demand that the international community finally choose: Either admit that the Palestinians aren’t actually refugees or finally start treating them as real refugees. If the former, it should dismantle UNRWA and use the agency’s $1.2 billion budget to encourage the places where Palestinians now live to start providing them with citizenship and basic services. And if the latter, it should dismantle UNRWA, transfer responsibility for Palestinian refugees to UNHCR and finally grant them the basic right of resettlement.

After 70 years, it’s long past time to stop treating millions of Palestinians as nothing but perpetual pawns in a war to destroy Israel.

Evelyn Gordon is a journalist and commentator living in Israel.