Resurgent anti-Semitism: Unlike the 1930s, Now Jews Have Christian Allies 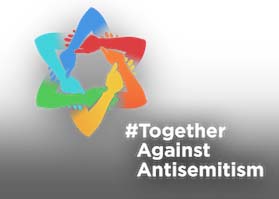 Amid growing anti-Semitism, many Facebook users have adopted this graphic

It’s widely acknowledged that anti-Semitism — hostility and hatred toward Jews — is again permeating some elements of society. Jews in Europe especially have been anxious for some time.

In the back of their minds, and in the back of the minds of many Jews throughout the world, is this lingering and unnerving question: Could these growing seeds of anti-Semitism lead to widespread physical violence against the Jewish people, which was exactly what happened in Germany in the 1930s during the decade that led up to the Holocaust.

“Some of the countries in Europe, whether on purpose or not, give their local Jewish communities the feeling they’re not wanted in their own country, like they’re second-class citizens, like they have less rights than other citizens. This is indeed a tragedy,” the head of the European Jewish Association recently told Ynetnews, an Israeli news service. (https://www.ynetnews.com/articles/0,7340,L-5582145,00.html)

Almost every day there are new manifestations of hatred toward Jews and brutal physical attacks, not only in Europe but in the US as well.

1.) There is a state of Israel — a country for Jews to flee to, providing a refuge that did not exist during the Holocaust.

The emergence of CUFI and other Christian groups motivated by a desire to bless Israel and befriend the Jewish people is one of the most significant developments of the last 40 years. In addition, both in private conversations and public statements there is a desire by many Christians to atone for the past atrocities committed against the Jewish people in the name of Christianity.

Anti-Semitism never quite goes away and at certain times, such as the era we are in, it becomes even more vicious and pronounced. That’s why nurturing the growing partnership between Jews and Christians, as the state of Israel has done particularly well, is absolutely crucial to the well-being of the Jewish people.

Richard Friedman is finishing a 37-year career as executive director of the Birmingham Jewish Federation and will join the staff of Israel InSight magazine on Jan. 1, 2020.