“No Surrender” details how Tenn. soldier stood up and saved American Jews during the Holocaust 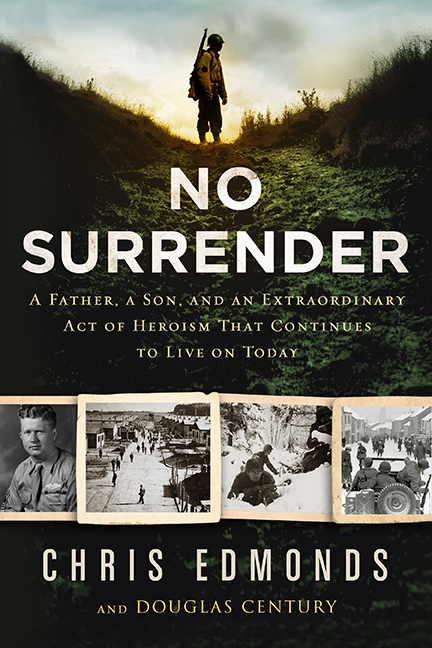 Pastor Chris Edmonds says that “the difference between a regular person and a hero is two seconds,” and he hopes that the spreading of his father’s story inspires people to become that hero, should they be faced with such circumstances.

Edmonds is promoting “Roddie’s Code” through this month’s release of the book “No Surrender: A Father, a Son, and an Extraordinary Act of Heroism That Continues to Live on Today,” the story of how his father, Master Sergeant Roddie Edmonds, ultimately became the first U.S. serviceman to be honored by Yad Vashem as Righteous Among the Nations for saving Jews during the Holocaust — and the only person recognized for saving American Jews.

Yad Vashem, Israel’s Holocaust Martyrs and Heroes Remembrance Authority, made the designation on Dec. 2, 2015. He is only the fifth American so recognized, with Varian Fry, Waitstill and Martha Sharp, and Lois Gunden. The next month, there was a ceremony at the Israeli Embassy in Washington.

Roddie Edmonds died in 1985, and it wasn’t until several years later that Chris Edmonds, pastor of Piney Grove Baptist Church in Maryville, Tenn., just outside of Knoxville, knew what his father had done — only those who were with him that day in Germany had the story.

In 2009, Chris Edmonds Googled his father’s name to see what he would find about his service. To his surprise, his father was mentioned in a 2008 New York Times article about Lester Tanner, a New York attorney who sold a home to President Richard Nixon in the 1970s, when nobody wanted the disgraced former president as a neighbor.

In the article, Tanner spoke about being a POW during World War II and how Roddie Edmonds had saved his life, and the lives of many others.

Astonished, Chris Edmonds got in touch with Tanner to find out what he was referring to.

Roddie Edmonds left Knoxville to join the Army in 1942, and trained troops. In late 1944 he was sent to the Ardennes Forest as part of the 422nd Regiment, 106th Infantry Division, in what was considered an easy posting — but instead, it was where the Germans launched a surprise attack on Dec. 16, leading to the Battle of the Bulge.

His regiment was captured on Dec. 19 and marched through brutal conditions to Bad Orb, a prisoner of war camp, arriving on Dec. 25.

On the first day, an order came out over the intercom — after roll call the next morning, only the Jewish prisoners were to fall out. It was well known that it was a death sentence to be a captured Jew — even a Jewish American soldier — in Europe, and some Jewish soldiers had swapped dog tags with dead comrades because of the identifying “H” for Hebrew.

Roddie Edmonds instructed his men that the next morning, everyone would fall out, saying that the Geneva Convention states they need give only name, rank and serial number.

The next morning, Jan. 27, 1945, all of the American soldiers were standing in front of the barracks. According to those close enough to witness the exchange, the German commander, Major Siegmann, angrily went to Roddie Edmonds and insisted, “All of you can’t be Jewish!”

Edmonds replied “We are all Jews here.”

The commander ordered him to have the Jewish soldiers step forward, but Edmonds replied that under the Geneva Convention he was not entitled to that information. Siegmann pressed his gun to Edmonds’ forehead and repeated his order, to which Edmonds answered that “If you shoot, you’ll have to kill all of us, and you will have to stand for war crimes after we win this war.”

Instead of shooting, the commander put his gun away and stormed off.

It is estimated that there were 200 Jewish soldiers among the prisoners, one of whom was Tanner.

Chris Edmonds was able to meet some of the others, some of whom have died in the last couple of years.

Another of the captured soldiers was Sonny Fox, who became a frequent game show guest host and host of the children’s show “Wonderama” in the 1960s.

Paul Stern, who stood near Roddie Edmonds during the exchange, detailed the encounter to Yad Vashem.

This wasn’t the end of Roddie Edmonds’ heroism. As Allied troops neared, the Germans told the prisoners that the next day they would be leaving and marching further into Germany. With the prisoners near starvation, Edmonds instructed them that they would not leave with the Germans on a death march — act sick, get sick, run to the barracks, just do not go with them.

Despite being threatened with being shot, they followed Edmonds’ orders, until the Germans finally threw up their hands and left the Americans behind, taking the French and British prisoners with them.

Once the Americans were alone in the camp, Edmonds had to convince them not to leave, that they could not survive on their own beyond the gates. The next day, they were liberated by the Third Army.

Since the story first came out a few years ago, there have been two documentaries by the Jewish Foundation for the Righteous, one of them a 14-minute piece that received Honorable Mention at the Academy Awards. It was narrated by Ted Koppel, and Chris Edmonds said “he was so gracious to be part of it.”

There is also interest in a major motion picture, he added, and efforts continue for Medal of Honor and Congressional Gold Medal recognition.

Chris Edmonds established Roddie’s Code as “a way to help me share Dad’s message and extend his legacy” by inspiring heroes everywhere.

Long before he knew of his father’s World War II heroism, Chris Edmonds said he knew his father had a strong moral code, including “doing what is right for others, opposing what’s wrong or evil, dignify life and humanity, express love for everyone.

“That’s years before I knew any of this. He just lived his life by that code.”

Tanner also spoke of Roddie Edmonds’ “very deeply held moral code,” based on “his spiritual walk with God and his understanding of God’s truth about how we should treat each other.”

In fact, Chris Edmonds related that Tanner told him his father’s code “is the code I’ve lived by since the day he did what he did.” As a New York lawyer, he added, that was difficult.

While he has spoken at Yad Vashem and at the national gathering for Christians United for Israel, Chris Edmonds particularly enjoys speaking to student groups. “I’ve spoken to quite a few fifth grade groups, and they’re some of my best, in terms of attention.”

He was inspired by a fifth grader in Murfreesboro, Tenn., who stood up in April to protest classmates making Nazi salutes when their class was doing a Living History project, and one of the students had been assigned to portray Hitler.

“Why in the world are we having students pushed to be Hitler?” he wondered. “That would never cross my mind in teaching about World War II.”

One recent speaking engagement was at Alumni Hall at the University of Tennessee, on Sept. 11. The film screening and talk was co-sponsored by a Christian group, the Campus House of Prayer, and the campus Hillel, with about 100 in attendance.

Later that night, someone vandalized The Rock, a central campus feature where messages are painted, posting a conspiracy theory about Israel’s supposed involvement in the Sept. 11, 2001, terror attack.

He said students “need to get courage in their hearts and report stuff like that” whenever they see it.

“We’ve got to take a stand against the blatant anti-Semitism that is happening across the country and around the world. Good people need to stand up and speak out,” Chris Edmonds said. “I hope Dad’s story will inspire lots of folks to do just that.”

By coming out with a book, he is able to tell “so much more of the story than we can share in short time slots,” including the story of the men who were with him.

Chris Edmonds took time off from speaking to finish the book, a process he described as “intense.”

While he was working on it, Harper Collins decided they also wanted a Young Readers’ Edition, “so I wound up writing two books.” There will be an audio version, and a CD edition for school libraries, he added.

“I had written hundreds of sermons, but that’s a different animal than writing a book,” he said. When looking for a co-author, he prayed for a Jewish writer to work with him, because “I felt like I really needed the Jewish voice and Jewish heart in the book. I would bring my father’s perspective and the Christian perspective.”

He found his partner in Douglas Century, a New York Times bestselling author whose works include “Brotherhood of Warriors,” about Aaron Cohen and his work in Israel’s Special Forces Duvdevan unit; “Barney Ross,” a biography of the Jewish boxing legend and World War II hero; and the biography of Congressional Medal of Honor recipient Jack Jacobs, “If Not Now, When? Duty and Sacrifice in America’s Time of Need.”

Chris Edmonds said Century “was the guy. I felt God connected us.”

In addition to speaking to students, Chris Edmonds was invited to become the chaplain for the 106th Division veterans’ group. In August, they held a reunion in Providence, R.I., with eight World War II veterans in attendance. “It was wonderful to be able to spend time with these gentlemen, experience their stories, enjoy their personalities,” he said.