Back from Israel, Auburn Coach Bruce Pearl Building Ties Between Jews and Christians 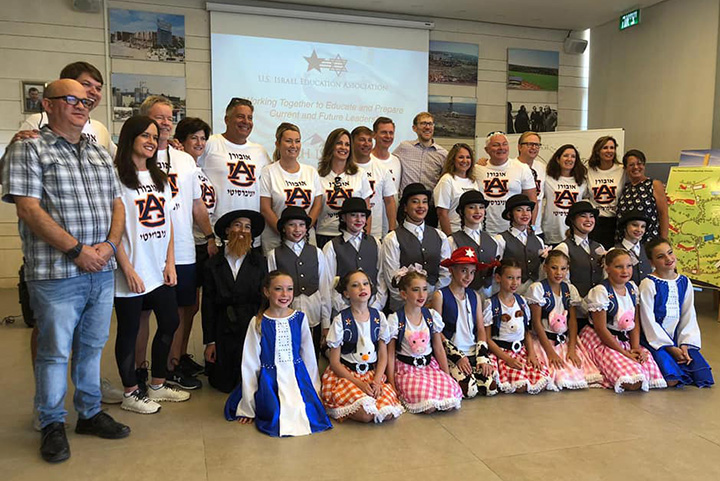 Bruce Pearl, sixth from left on top row, and a delegation from the Auburn area visited Ariel, and are pictured here with student performers

Auburn University head basketball coach Bruce Pearl is a hulking guy with a huge heart. He cares deeply about people, cries at the drop of a hat, and though he led his Auburn team to the Final Four this year, is as passionate about Israel as he is about basketball.

Those were the takeaways from an inspirational from-the-heart talk Pearl gave Oct. 13 to an audience of about 60 Christians and Jews at the Birmingham home of Heather Johnston. Pearl and his wife Brandy recently visited Israel on a trip sponsored by the Birmingham-based US Israel Education Association, an organization Johnston founded and leads as executive director.

Pearl had been to Israel before. But this trip was different because it included a blend of Evangelical Christians, including Pearl’s wife Brandy, and Jews such as Pearl, who is passionate about his faith and heritage.

The trip, which was small, was comprised mainly of individuals and couples connected to Auburn University. It provided a wonderful opportunity for joint exploration and dialogue in a spiritual context, as well as an on-the-ground look at Israel’s complexities and challenges.

Participants had the chance to learn more about USIEA’s signature programs — which include enhancing understanding of Israel’s presence in Judea and Samaria (the West Bank) and breakthrough initiatives to promote Israeli-Palestinian coexistence and harmony through the development of business partnerships.

Johnston also leads another organization, JH Israel, which has initiated cutting-edge leadership development programs based on teachings and lessons from the Hebrew Bible. These programs touch thousands of young Israeli lives every year and take place at the National Leadership Center in Ariel, one of the major Jewish cities in Judea and Samaria. Pearl had the chance to see these programs as well.

What came through in his talk, perhaps more than anything, is Pearl’s pride in Israel as a Jew, and his recognition that through Johnston’s two organizations, a unique venue has been created for Christians and Jews to work together to strengthen Israel.

As a Jew, Pearl, a Boston native who is 60, recalls his grandfather laying awake at night during Israel’s early years wondering if the Jewish state would survive. “I’m grateful to my Jewish and Christian friends for helping Israel survive,” said Pearl.

As a basketball coach whose job is to bring individuals together to create a team, seeing what USIEA and JH Israel are doing to make life better for Israelis and Palestinians, touched him deeply. In addition, he said, “Jews and Christians are from the same family — I’m trying to bring people together.“

As part of this effort to bring people together, he plans to bring the Auburn basketball team to Israel in August 2021. “I want these kids to experience Israel, see how great it is and come home and tell their families.”

As a basketball coach working his way up over the years from school to school, Pearl didn’t always have the financial resources that he has today as one of the most successful basketball coaches in the Southeastern Conference. Given his more prosperous circumstances, the trip motivated the Pearls to make the largest gifts they’ve ever made in support of Israel, through generous donations to USIEA and JH Israel.

In addition, Pearl said, he and his wife are “just scratching the surface” with their donations to USIEA and JH Israel, because they share a love for Israel, and Johnston’s two organizations have created a venue for them to share that love even more deeply. “We’re going to do more,” Pearl promised.

Johnston also spoke at the program, highlighting USIEA’s achievements and reflecting on the Jewish holiday of Sukkot which was beginning that evening. She talked knowledgeably and passionately about the significance of the holiday to Jews and broadened it metaphorically to embrace all of the people who were there. Sukkot, she said, is “a powerful festival of commemoration.”

Powerful indeed was the operative word for those there that night. Johnston, a Christian Biblically-inspired to support Israel, and Pearl, an open-hearted fiercely proud Jew, were a powerful combination — not only inspiring each other but inspiring everyone who was there.

(Richard Friedman is finishing a long-time career as executive director of the Birmingham Jewish Federation. He will be joining the staffs of the US Israel Education Association and Israel InSight magazine.)