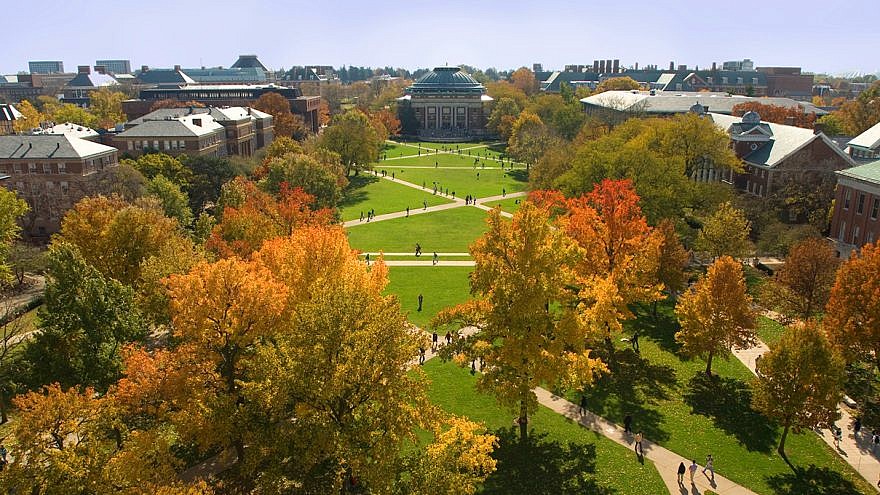 (JNS) — A resolution introduced by Students for Justice in Palestine at the University of Illinois passed the school’s student government on Oct. 23, accusing the university’s chancellor for condemning a recent streak of anti-Semitic incidents, including a swastika being found on one of its buildings and an anti-Semitic presentation at a mandatory meeting for the school’s residential living team.

The final tally was 29 in favor, four against and four abstentions.

“The transparent goal of this resolution was not to oppose anti-Semitism, but to shield anti-Israel groups from any accountability when they cross the line into hate speech against Jews,” said Liora Bachrach, StandWithUs associate director of campus affairs. “The fact that this was even introduced is a mark of shame on ISG, which has made a mockery of its own stated values. We are proud of Jewish students who came out in large numbers, and showed that ISG has no legitimacy or credibility to speak about this issue.”

Nearly 600 people attended the meeting, with hundreds of Jewish students walking out of it to a rally cry of “We do not negotiate anti-Semitism!”

“We are using our position as student leaders to define what the Jewish community goes through,” said student-body vice president Jack Langen. “I believe this is wrong, and we would be speaking for a community that has publicly disagreed with how we would be representing them.”

Seth Israel, a StandWithUs Emerson Fellow at the University of Illinois, condemned the passage of the resolution without consulting the school’s Jewish community.

“I’m a Jewish student who has dealt with multiple instances of anti-Semitism on campus. For ISG to try to define what is anti-Semitic and what is not without the Jewish community’s voice is appalling,” said Israel. “I am proud of my people, religion and culture. I’m glad we stood together as one to fight for what’s right and what’s just.”

Despite the outcome, Wednesday night “was one of the most inspiring displays of Jewish solidarity we’ve ever seen from a university community,” said Emily Briskman, associate vice president of campus affairs at the Jewish United Fund and executive director of JUF’s Israel Education Center.

‘Instead of fostering dialogue, it incited division, distrust and anger’

The resolution accuses Chancellor Robert Jones of having “improperly characterized” the presentation in his Oct. 9 mass email to the university community as having anti-Semitic content, even though the presentation, titled “Palestine & Great Return March: Palestinian Resistance to 70 Years of Israeli Terror,” included libelous statements with one of the slides headlined “Brief History of the Palestine-Israel ‘Conflict’ ” that stated that in 1917 the “British signed away Palestine to Zionist entity,” when the Balfour Declaration that year declared that the right of the Jews to have a state in their homeland from which they were exiled thousands of years earlier.

It also labeled Israel’s independence in 1948 the nakba (a “catastrophe”), despite the 1947 partition plan that the Jews accepted and the Arabs rejected, and presented Israel’s 2014 Operation Protective Edge as an Israeli “assault on Gaza,” despite the fact that Hamas, which controls Gaza, started the violence by launching rockets from civilian centers into Israel.

In a recent campus email criticizing the presentation, Jones wrote, “This exercise was part of a university program created to help students learn to share diverse ideas and perspectives that lead to new understanding. Instead of fostering dialogue, it incited division, distrust and anger.”

Nonetheless, the SJP resolution stated that “this presentation should not have been equated with the image of a swastika, a symbol that literally and violently threatens Jewish people across the world.” It added that “Zionism is defined by the Oxford English Dictionary as a political stance whose object is “the assured settlement of [Jewish people’s] race upon a national basis in Palestine,” while missing the second part of the definition: “after 1948, concerned chiefly with the development of the State of Israel.”

“Palestine” was the name of the British mandate before the 1947 U.N. partition plan, which the Jews accepted and the Arabs rejected.

The resolution mentions part the Oxford definition of anti-Semitism “Prejudice, hostility or discrimination towards Jewish people,” while omitting that it’s based “on religious, cultural or ethnic grounds.”

However, many, including the International Holocaust Remembrance Alliance and U.S. Secretary of State Mike Pompeo, have deemed that anti-Zionism is anti-Semitism.

The resolution states “this false equivalence has gained national prominence as a method for cloaking legitimate anti-Semitism behind attacks on political ideologies opposed to religious violence.”