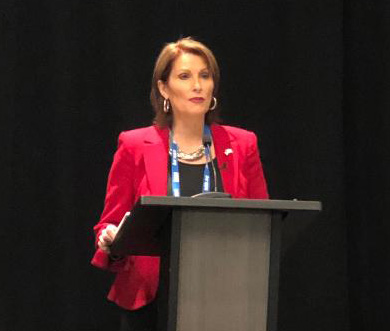 A Tennessee-based pro-Israel organization that fights antisemitism is battling back against being designated an anti-Muslim hate group by the Montgomery-based Southern Poverty Law Center.

While the SPLC first listed Franklin, Tenn.,-based Proclaiming Justice to the Nations to its annual list of hate groups in 2018, PJTN has been speaking out about the designation in recent days. The list contains over 1,000 organizations, mainly focusing on Klan, neo-Nazi and racist skinhead groups.

Laurie Cardoza-Moore, founder of PJTN, said their listing is ironic, as PJTN exists “to fight the world’s oldest hatred — antisemitism” and to list the group “alongside bigots and Nazis minimizes the true meaning of hate.”

The SPLC listed the group, without explanation, in its Anti-Muslim category of those who “exhibit extreme hostility toward Muslims… portray those who worship Islam as fundamentally alien and attribute to its followers an inherent set of negative traits” and “hold conspiratorial views regarding the inherent danger to America posed by its Muslim-American community,” which the SPLC says those groups view as “a monolithic and evil religion.”

According to the SPLC, “Anti-Muslim hate groups are a relatively new phenomenon in the United States,” generally appearing following the Sept. 11, 2001, terror attacks. The report lists Brigitte Gabriel’s Act for America as “the largest anti-Muslim hate group.”

The SPLC opposes the groups that seek to push “harmful anti-Sharia law bills” in state legislatures, and stated that “anti-Muslim groups are hopeful there is a chance the Muslim Brotherhood will be designated as a foreign terrorist organization,” adding that activists fear that designation would likely lead to “intimidation, harassment and smears of Muslim and Arab groups here in the United States.”

In recent years, the SPLC has been accused of casting a wide net in labeling groups anti-Muslim, while virtually ignoring antisemitic incitement by Muslim groups and individuals.

Others have criticized the organization for focusing almost exclusively on white nationalism and hate from the right, becoming more political and less even-handed.

A June 2019 piece by the SPLC talks about violence from the radical right, saying “every single extremist killing” in 2018 was linked to right-wing supremacism, and despite the occasional incident such as the shooting of Louisiana Rep. Steve Scalise, left-wing violence has been declining “for decades.”

Cardoza-Moore said “If being pro-Israel is now considered a hate crime, I will wear the SPLC listing as a badge of honor.” She added, “The SPLC list has become nothing short of a witch hunt against organizations that don’t share their extremist liberal worldview.”

While homeschooling five children, Cardoza-Moore became aware of “anti-Semitic, anti-Christian, and anti-American content” in children’s textbooks, and set out to change that. She is now a Special Envoy to the United Nations for Human Rights and Against Anti-Semitism, and in addition to promoting awareness of bias in textbooks, her organization fights against the boycott-Israel movement and enlists Christians help “rid the worldview of anti-Semites from all our communal spaces, from our churches to our schools and all the way to the UN.”

According to the PJTN website, antisemitism does not come from one group of people, but “it so happens that… in this current time, much of the ideological and physical war calling for extermination of the Jewish people and Israel is coming from a faction within Islam.  That is NOT to say all Muslims, nor EXCLUSIVELY Muslims.”

Earlier this year, PJTN responded to antisemitic tropes by Reps. Ilhan Omar and Rashida Tlaib by starting a petition drive urging their removal from Congress. In April, Cardoza-Moore called on Trump to investigate Omar’s ties to the Muslim Brotherhood.

At the National Religious Broadcasters Convention in California in March, she urged Christian media outlets to actively fight against antisemitism.

In an Oct. 22 statement, Cardoza-Moore stated that a group of “Sharia supremacists” are “actively at work to make Islam’s totalitarian ideology the law of the land,” and Reps. Ilhan and Omar “rally support daily in Congress to divide America and instill antisemitism and hatred for Israel as the new norm for this generation of voters.”

In speaking out against a “civilization jihad,” she said her mission is “not hate, only truth.”

This isn’t the first time there have been questions over the SPLC’s anti-Muslim designations. In 2016, the SPLC published “A Journalist’s Manual: Field Guide to Anti-Muslim Extremists.”

In June 2018, the SPLC issued a formal apology to Maajid Nawaz and the Quilliam Foundation, his organization, for including them in the guide, and made a $3.4 million payment that will go toward Quilliam’s work.

Nawaz, a British-born Muslim, was radicalized as a teen and wound up in an Egyptian prison. He realized that Islamism was wrong and that it could be separated from the Muslim religion, so he started his organization in Britain to fight Islamic extremism.

Among the other individuals listed in the Field Guide, which has since been withdrawn, are Steven Emerson, Brigitte Gabriel, Ayaan Hirsi Ali, David Horowitz and Daniel Pipes.

In a statement regarding the settlement, the SPLC said “Given our understanding of the views of Mr. Nawaz and Quilliam, it was our opinion at the time that the Field Guide was published that their inclusion was warranted. But after getting a deeper understanding of their views and after hearing from others for whom we have great respect, we realize that we were simply wrong to have included Mr. Nawaz and Quilliam in the Field Guide in the first place.”

Ironically, the SPLC noted that United Nations-affiliated human rights groups told them “Nawaz’s work combatting extremism ‘is actually analogous to that of the SPLC over the years in the South’… Although we may have our differences with some of the positions that Mr. Nawaz and Quilliam have taken, we recognize that they have made important contributions to efforts to promote pluralism and that they are most certainly not anti-Muslim extremists.”

In May 2018, a talk by SPLC co-founder Joseph Levin, Jr., under the auspices of the Community Relations Committee of the Jewish Federation of Nashville and Middle Tennessee, drew criticism on the basis of SPLC’s reluctance to criticize radical Islamists.

Gregg Roman, director of Middle East Forum and former director of Pittsburgh’s CRC, said SPLC is a group that will “support us Jews when it’s easy — by condemning vandalism against synagogues, for instance—but that look the other way when Islamist anti-Semitism, often manifested as vitriol against the Jewish state, rears its ugly head.”

Pointing to the SPLC’s statement that “organizations operating in the mainstream” can be hate groups, and that “it’s even more important to call out groups that demonize others while having a foothold in the mainstream,” he said the group gives Islamist organizations a pass while emphasizing “that dying breed of Jew-hate exhibited by the ever-shrinking population of American racist skinheads and neo-Nazis.”

Morton Klein, president of the Zionist Organization of America, told the Nashville Star that Jewish organizations do “a disservice to the Jewish community by bringing in a group which ignored or minimizes the greatest anti-Semitic threats to Jews, namely, radical Islam and the far left wing groups.”

According to Cardoza-Moore, who attended the event to find out why her group had been listed, Levin spoke of the large rise in antisemitic incidents on college campuses, but failed to mention the involvement of groups like Students for Justice in Palestine, whose activities have fomented anti-Jewish harassment on numerous campuses and whose leaders have been repeatedly called out for antisemitic social media posts. When asked about SJP, Levin said he was not familiar with the group.

A search for Students for Justice in Palestine on the SPLC website brings just two mentions, neither of them critical of the organization.

A search for the Council on American Islamic Relations returns dozens of mentions, none of which critique antisemitic statements of CAIR leaders, but which defend CAIR from its critics.

In September, the Women’s March rotated out leadership members who had histories of antisemitic statements and named Zahra Billoo, executive director of CAIR in San Francisco, to its board. Within days, Billoo was removed following the revelation of numerous antisemitic and conspiratorial social media posts, including “I’m more afraid of racist Zionists who support Apartheid Israel than of the mentally ill young people the FBI recruits to join ISIS” and “Blaming Hamas for firing rockets at [Apartheid] Israel is like blaming a woman for punching her rapist.” She also referred to people who support Israel as “baby killers” that “I don’t think we can work on civil rights together in the US” with.

CAIR has also been accused of being a Muslim Brotherhood offshoot.

Conversely, the SPLC called out David Friedman, now the U.S. ambassador to Israel, for “extremist ties,” “his history of incendiary rhetoric” and his support of a yeshiva in Beit El, Mobile’s sister city in the territories, during his confirmation hearing in 2017.

Searching the terms “Palestine” or “Palestinian” on the SPLC site brings a list of pieces that are almost all about anti-Muslim bias and incidents, though there are a handful that talk about Palestinian extremism — almost a decade ago.

In 2009 there was a piece critical of former Georgia Congresswoman Cynthia McKinney and her antisemitic rhetoric, and one about a left-wing bilingual English-Spanish radio station in Los Angeles that hosted an antisemitic weekly talk show.

In 2011, the SPLC had a piece about how to prevent the radicalization of Muslim youth, accompanied by a piece about 10 “homegrown jihadists,” and in 2013 they did a follow-up on one of them who was convicted for threatening Jewish leaders. The piece noted that Yousef al-Khattab had actually been born Jewish but converted to Islam and started a Muslim extremist website.

In 2015, the SPLC called out a pro-Palestinian activist, Kenneth O’Keefe, saying “While most American-born activists who become involved in defending Palestinian rights avoid becoming overt anti-Semites even while steadfastly criticizing Israel, Kenneth O’Keefe is not one of them.”

But O’Keefe, a former Marine, is a fan of David Duke and regular speaker to white supremacist groups. The piece also noted that a group of pro-Palestinian activists issued a letter denouncing such antisemitism, though it did not comment on their view that Zionism includes “the illegitimate use of Jewish identities to protect and legitimize oppression,” and linking or using antisemitic language is “reaffirming and legitimizing Zionism,” and “obscures the fundamental role of imperialism and colonialism in destroying our homeland, expelling its people, and sustaining the systems and ideologies of oppression, apartheid and occupation.”

In an April 2019 piece about non-black professors of African studies being targeted by hate messages, the SPLC says messages from the person responsible “reveal an undercurrent of antisemitism” common to black nationalist groups, which the SPLC dispassionately explained “are generally reacting to hundreds of years of oppression via white supremacy, and look to form their own institutions out of the mainstream. Most are anti-white, antisemitic and anti-LGBT, and some, like AlphaKhenOmega, profess that black people are God’s ‘chosen people’.”

Cardoza-Moore also said the listing of PJTN is ironic given how it was recently revealed that SPLC founder Morris Dees, who was dismissed from the organization last year, donated to the Congressional campaign of Valerie Plame in New Mexico. Recently, Plame was criticized for tweeting links “to antisemitic articles from a website that denies the Holocaust and loudly proclaims that Israel orchestrated the 9/11 terror attacks.”

In her apology, Plame said she had only skimmed the piece, “America’s Jews Are Driving America’s Wars,” and did not realize the content was antisemitic until she read it more closely later.