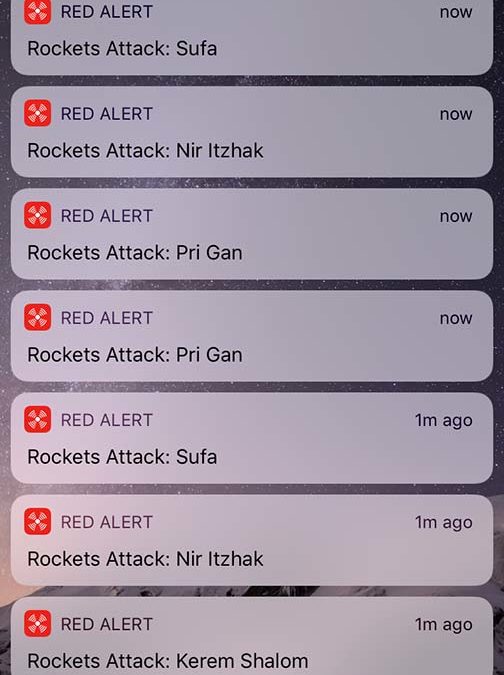 Beginning early on Nov. 12, Palestinian Arab terrorists fired more than 400 rockets at Israeli communities from Gaza, forcing schools and businesses to close in order to prevent too many people gathering in any one place, despite bomb shelters being a required part of construction of all buildings.

As of this writing, a cease fire is in place which was “only” broken three times by the Palestinian Islamic Jihad terror group, including a barrage last night (Nov. 14), interrupting the attempted sleep of a million Israelis in range. As of this writing, while more than a million Israelis were living under fear of an imminent attack, I and my family were not in harm’s way, or impacted directly in any significant way. At the moment, things are quiet, but with the threat of these terrorists never actually going away, anything could change, at any moment.

Parents stayed home from work, keeping kids at home and safe. Sitting at home one evening when my daughter brought our grandson to visit, she looked at the situation through the eyes of a parent of a toddler. “How do you keep a baby in a bomb shelter?” she wondered rhetorically as my one-year old grandson strutted around the house trying out his relatively new form of transportation, on two feet. Even in a bomb shelter not as cluttered as ours, with a desk, refrigerator, freezer and shelves for storage, how do you stay in one room pretty much all day? Especially for, or with, a baby who has no understanding of the looming threat, or the boxes above him containing gas masks, just in case.

On the second day of the attacks, my 14-year-old son came home to tell me about a conversation he had with friends. “Abba,” he said, “We have 90 seconds to get to a bomb shelter. That’s a lot. You could drive home and put away the groceries.” If he and his friends know we have 90 seconds to take cover, can they comprehend how little time 15 or 30 seconds are for people living with this daily.

How much can you do in 90 seconds, 15, 30? What if you’re in the shower? What would you be afraid to get caught in the middle of doing not knowing if the next moment you’d be running for cover?

Because of the ban on public gatherings of more than 100, several weddings were canceled. But, with Israelis being resilient and always looking for good news, several weddings did happen, and became the subject of live broadcasts on the evening news. In once case, the famous Israeli singer and Eurovision winner, Neta Barzilai, even showed up to sing and celebrate with a couple she had never met.

I landed at home in Israel hours after the recent barrage of terrorist rockets began. Before even reaching the gate, the whole plane was talking about this. With my phone on checking the news, my Red Alert app was going off like a slot machine in my pocket.

As soon as I heard the news, I shared what was going on with the Israeli woman sitting across the aisle. Moments earlier she stretched and exclaimed in happiness how glad she was to be “home.”

She let out an absurd rant, blaming Prime Minister Netanyahu for the rockets as part of some political ploy. No, I told her. The terrorists are the ones to blame. She wouldn’t let go of it. Welcome home indeed.

Then I shared the situation with the pastors in front of me who I had befriended en route so they should know and be prepared to deal with the 60 people from their church. They seemed unfazed, but were grateful for the update. Perhaps their true excitement at being in Israel overcompensated for any concern. Or perhaps their faith in God. Welcome to Israel.

I pray that our guests have a meaningful and inspiring visit, and that our fellow citizens will not use their political bias to distract from the fact that how terrorists behave is not the blame of any Israeli. They are terrorists. That’s their MO. They are evil.

Throughout the day into the next, hundreds more rockets were fired at Israel by terrorists in Gaza. The Red Alert app has been going off all the time. Jetlagged, I was annoyed when this happened when I was trying to rest. That’s absurd, I know. There are people who can’t sleep through the night because they have the real thing, not an app making noise on the phone dozens of miles away.

I feel somewhat guilty that where I am, we’re completely insulated from this and each time I hear the alert, I think about those racing to a bomb shelter, the kids who live with the trauma and fear, and the parents who do their best to keep their kids and themselves as safe and living normally as possible. Of course, “normal” is relative depending on how close you are to the Gazan terrorists.

I also wonder if there are Palestinian Arabs in Gaza who, rather than celebrating their “armed resistance” are actually angry at their terrorist leaders. Do they realize that each rocket they fire represents resources that could have been invested to make their lives better?

Do they realize that the resources used to build bunkers and tunnels in which their terrorist leaders hide could have built houses, schools, and hospitals?

Do they realize that the terrorists put them directly in harm’s way firing rockets from areas near schools, mosques, hospitals, and populated neighborhoods?

Do any Gazans realize or care that no matter how many rockets they fire does not bring them closer to “Free Palestine,” and not even a “Palestine” at 50 percent off?

Do they consider a revolution to take their lives in their own hands from leaders who use them as human shields, to build something for their future rather than trying to destroy ours?

The latest round may be over, for now. We are glad, but always cautious.

Jonathan Feldstein was born and educated in the U.S. and immigrated to Israel in 2004. He is married and the father of six. He is the founder and president of the Genesis 123 Foundation, of which Run for Zion is an inaugural project, and works extensively with Christian supporters of Israel.