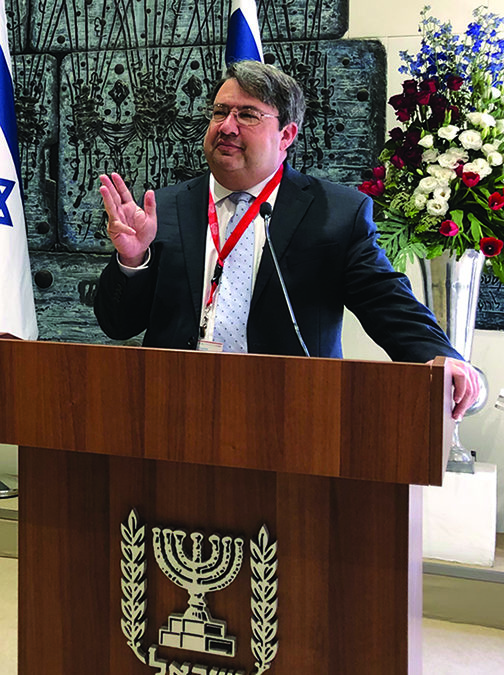 (This column is the lead editorial in the November 2019 issue of Southern Jewish Life.)

There has been a lot of talk about antisemitism lately, and a heated debate on where it comes from and what manifestation is worse, though Deborah Lipstadt, who wrote the book on the topic, reminds everyone that it comes from more than one side and is dangerous in every form.

One recent version of the debate was done publicly with members of IfNotNow confronting Rep. Steve Scalise of Louisiana, the House Republican Whip, demanding that he condemn antisemitism coming from Republicans. For the left-wing activist group, his condemnation of antisemitism in general was insufficient.

When one brings up the idea that antisemitism isn’t restricted to one side of the political spectrum, the argument is naturally made that the recent synagogue shooters were white nationalists on the right, and thus right-wing antisemitism is far more dangerous.

Yes, the nuts who enter synagogues to commit terror attacks in the U.S. are generally lone-wolf right wingers. While their brazen acts are usually linked to a coarsening of public dialogue under Trump, the actual shooters have shown a dislike of Trump, because they see him as a puppet under control of the Jews.

The death toll from the right far exceeds that from the left, though the mostly-ignored plague of assaults against Orthodox Jews in New York has come from people of color, not white supremacists — and have been explained away by many as a natural reaction to perceived economic circumstances, such as gentrification, in the neighborhoods, for which Jews are viewed as perpetrators, not victims.

But most people have also forgotten that in the last year, there have been four potentially mass-murderous plots against Jewish communities by Islamic extremists in the U.S. — in Ohio, California, Montana and Georgia — that were all thwarted by law enforcement.

In Europe it came as a shock when the Yom Kippur synagogue attacker in Halle, Germany, was revealed to be a right-winger; in Europe, they are used to frequent jihadist attacks on Jews by radicalized Muslim immigrants.

In a recent talk in Atlanta, U.S. Special Envoy for Monitoring and Combating Anti-Semitism Elan Carr said there are three main places from where antisemitism is spreading — “ethnic supremacism of the far right, Israel-hatred on the radical left and militant Islam.” He spent more time discussing the left, though he cautioned it wasn’t because that was more important or a greater threat. “We don’t rank kinds of Jew-hatred.”

While the venom from the left is, at this point, mere words, is there not a danger in rhetoric?

When David Duke says something, he’s a crank, a Nazi Klansman who can’t be taken seriously. When left-wing college professors say the same things about Jews, even drawing praise from Duke, it’s their academic freedom and they have every right to their beliefs, and besides, look at what Israel is doing to deserve such criticism (which, mind you, is always legitimate and can never be called antisemitism, no matter how vile, and if you complain, you’re just trying to shut down legitimate discourse by saying any criticism of Israel is antisemitism).

Discrimination against and harassment of Jewish students has become mainstreamed and acceptable on many college campuses. Student newspapers publish vile screeds against Israel then refuse to let Jewish students respond. Jewish students are marginalized for insufficient loathing of an Israel that is portrayed as worse than the Klan or the Nazis, and of course nobody would allow the Klan or Nazis to have a say in the public square.

Through monstrous lies, a whole generation is being conditioned to look at Israel as the world’s rogue regime, and since the Jewish community (with a few exceptions) knows how off-base that assessment is, we are targeted by yet another irrational hatred, this time wrapped in the name of justice, inclusion and a warped view of human rights.

After the Holocaust, wide swaths of the Christian world were forced to look in the mirror and examine their centuries of anti-Jewish theological teachings, and ask themselves whether that greased the skids for the Holocaust. Sure, the Nazis weren’t acting out of a Christian ideology, but did the centuries of anti-Jewish conditioning in society help the average citizen rationalize it or not care about what was happening to the Jews?

If Iran nuked Tel Aviv, would it be condemned or celebrated on campuses in the U.S.?

There is another linkage made between Jesus and the Palestinians. Every other year there is a program called Christ at the Checkpoint, where it is said that the “Palestinian” Mary and Joseph would not have been allowed into today’s Bethlehem by Israel, and that Israel operates a “crucifixion system” against the Palestinians. It’s the ancient deicide charge updated for the woke 21st century.

If there were a group out there committing genocide, stealing organs from innocent people, targeting children, engaging in supremacism… if something bad were to happen to them, well, at best there is a feeling that karma comes home to roost. At worst, it’s time to pile on for some payback.

That is the danger of what is becoming mainstream in far too many places, from the college campus to certain Congressional offices. It isn’t just that Jews are being libeled and accused of all manner of outlandish offenses, it’s that those lies that would make David Duke blush are coming from college professors and otherwise respected public figures, and are becoming mainstream among the next generation.

How do you teach “Never Again” to a generation that is being sold a lie that Jews have turned right around and are perpetrating Holocaust Part II on the Palestinians (while arguing over whether Part I really took place, or was actually part of a Zionist collaboration with Hitler)?

Making the situation muddier, the left has embraced fellow traveler ostensibly Jewish extremist groups as a fig leaf — how can this “legitimate criticism” be antisemitism when “the Jews” agree with us?

In 2019, whites can’t decide for African-Americans what is or isn’t racist. Heterosexuals can’t be the arbiter of what is homophobic. But when it comes to antisemitism? Sit down, Jew, we’ll let you know when something is antisemitic (spoiler alert: it’ll never be something from our enlightened side of the aisle).

Yes, right wing antisemitism has been much more of a physical threat, at least in the U.S. But looking long-term, it would be foolish to ignore the ideological threat coming from the not-as-far-anymore left, and its potential for serious long-term damage that is far more severe — and accepted in society.