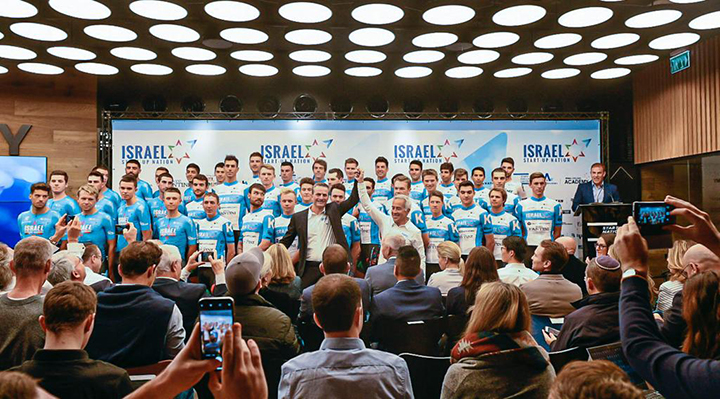 For the first time, Israel will be represented at cycling’s biggest event, the Tour de France, showcasing Israeli innovation to billions of television viewers.

On Dec. 11, Israel Cycling Academy announced its partnership with Start-Up Nation Central, a Tel Aviv-based non-profit organization that connects companies around the world to Israeli innovation.

Under the name Israel Start-Up Nation, the team will be a new entrant in the World Tour. As a result, it will become the first ever Israeli team to compete in the Tour de France, the world’s third most watched sporting event, after the quadrennial summer Olympic Games and the soccer World Cup.

Participation in the Tour de France represents the enormous progress made by Israel Cycling Academy over just five years. ICA was founded in December 2014 in Jerusalem as Israel’s first professional cycling team, with a clear vision to help Israeli cycling and to bring young cyclists to the highest level of the sport. At the same time, riders from the team act as “ambassadors” for the home country, demonstrating a vision of peace through sport.

The 2017 season was the team’s first in the second-tier Pro Continental ranks, and in 2018 the team raced in its first Grand Tour — the historic Giro d’Italia, which started in Jerusalem. ICA raced again in the Giro d’Italia in 2019. This same season, the team significantly stepped up its racing performance and recorded 29 wins.

Israel Start-Up Nation carries 30 riders from 16 different nationalities. The team will include four Israeli riders: Itamar Einhorn, Omer Goldstein, Guy Niv and Guy Sagiv. In order to be competitive on the World Tour, Israel Start-Up Nation has also signed some of the sport’s most experienced riders, including Andre Greipel, Dan Martin and Dani Navarro.

The team is owned by Israeli Canadian philanthropist Sylvan Adams and Israeli businessman Ron Baron. Taking a minority interest this year is Kevin Lam, a Canadian, via his company, Reinvent.com.

“The dream of competing in the Tour de France, almost unthinkable only 5 years ago when we launched the team, is now coming true. A professional team with world class Israeli riders alongside the finest international talents, racing with pride in one of the world’s most prestigious sporting events. Around 3.5 billion viewers in hundreds of countries across the world will see the Israeli flag and hear the message that this is a country bringing unrivalled innovation to the world,” said Adams.

“By partnering with Start-Up Nation Central, we are showcasing the Israeli tech ecosystem on a global stage, sending a clear message that this is a country with so much to offer the world. I have no doubt that cutting-edge Israeli technology will give our team a competitive advantage as we race against the very best in world cycling,” continued Adams.

“Our goal is to get Israel’s powerful tech ecosystem behind the cycling team, as it becomes a formidable competitor, and leverage the knowledge gained from testing these technologies on Israel Start-Up Nation cycling team to benefit other athletic teams,” said Prof. Eugene Kandel, CEO of Start-Up Nation Central.

In addition to the partnership with Start-Up Nation Central, the ICA riders will continue to serve as Peres Center for Peace and Innovation “Peace Ambassadors,” a title they were bestowed in 2018. The Center’s logo will appear on their uniform to help spread a message of peace and coexistence.

Efrat Duvdevani, director of the Peres Center, said “Shimon Peres always said that to strive for peace and innovation, one always needs to look forward, with eyes on the target and not stop for a moment. This is exactly what these cyclists do, with their eyes fixed on the goal ahead, while their legs never stop pedaling. And so, we are thankful that the Israel Cycling Academy team rides with the symbol of the Peres Center of Peace and Innovation on their shoulders. We are sure that you will proudly carry the values of peace, innovation and tolerance on your shoulders and feel that with them, the sky is the limit.”