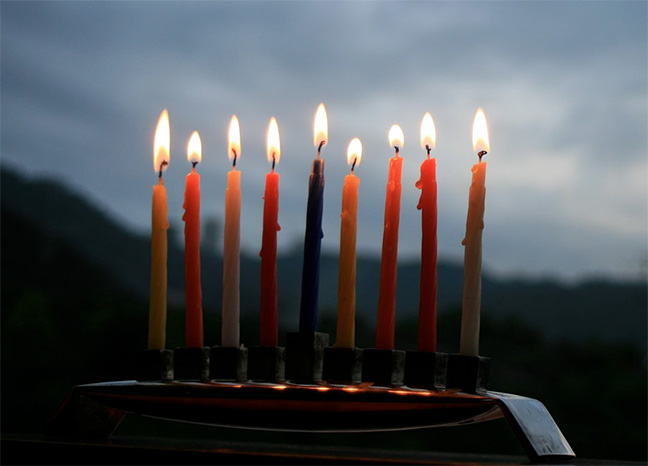 Not too long ago, I found myself in a conversation with six new Evangelical Christian friends. We’ve become connected this past year through our common dedication to Israel and work for two organizations that promote Israel’s well-being — US Israel Education Association and JH Israel.

Aside from our focus on the work at hand, the experience has created ongoing opportunities for learning exchanges and deepening friendships between them as Christians and me as a Jew.

One of these occasions took place recently during a Chanukah discussion and party that a local Jewish educator and I conducted for my new Evangelical friends who wanted to learn more about this Jewish festival.

They heard about the Chanukah story, an inspirational and enduring saga that took place about 2000 years ago in which the Jews throw off the yoke of religious oppression, rededicate the holy Temple in Jerusalem to God and reaffirm their faith in the Almighty.

It is a powerful and uplifting narrative culminating in a miracle — the Jews finding only a tiny amount of oil to light the Temple’s Menorah (religious candleabra), but it lasting eight days. Thus Chanukah has become an eight-day festival with an additional candle being lit each night.

Discussing Chanukah with my Christian friends was particularly moving, because as it turned out there were eight people in the room. So each person lit one of the candles on the Menorah that I had brought. It was a very symbolic coming-together of Jews and Christians.  It also was noted that Jesus celebrated Chanukah, which I could tell additionally affected my colleagues as we collectively lit the Menorah.

Equally powerful was a subsequent discussion our group had on the Jews’ miraculous ability, even when vastly outnumbered, to defeat their oppressors.

Then we began talking about the Holocaust.

I suggested that among the greatest contributions of the Jewish people to civilization — which include introducing monotheism, adopting codes of behavior that have guided Western civilization, and providing the foundation for Christianity, all of which have transformed humankind — that the ways Jews have responded to adversity, in particular to the Holocaust, also rank among history’s looming achievements.

In the wake of 6 million Jews — one third of the Jewish people — being murdered by Hitler’s Nazis and their collaborators, the Jewish people did something extraordinary. They did not withdraw; become insular, jaded and angry; and cloak themselves in victimhood.

Instead, they came together, driven by divine inspiration, pioneering determination and an uncompromising tenacity to rebuild their shattered peoplehood, and built a country which, by every standard imaginable, has become one of the most successful countries in the world.

Equally remarkable is that this tiny country, Israel, whose existence has been threatened every day since its rebirth as a modern Jewish state in 1948, continues to extend a hand of friendship to countless other countries, even those dedicated to Israel’s destruction, such as Iran and Syria, to share its know-how and genius to make life better for others.

Since that conversation with my Evangelical colleagues, I came across a moving story on History.com on how Jews celebrated Chanukah in the Nazi death camps where any expression of Judaism was punishable by death. Here’s an excerpt: “In 1943, amid the horrors of Bergen-Belsen, 11 survivors saved scraps of fat from their food and used loose threads to form makeshift wicks. A carved raw potato served as the candle-holder, while a wooden shoe was repurposed into a children’s dreidel.”

Faith in God, an irrevocable and eternal partnership with the Almighty and the land of Israel, Jewish courage and compassion, and a sense of destiny that Jews have been singled out for a special purpose are what motivate Israel and the Jewish people. These are the recurring themes of the Jewish narrative, from Chanukah to the Holocaust — a story that continues to be written daily.

Richard Friedman will soon complete his long-time tenure as executive director of the Birmingham Jewish Federation and join the staffs of Israel InSight magazine and the US Israel Education Association.