Ceremonies in Montgomery, at Knesset celebrate Alabama declaration on unity of Jerusalem 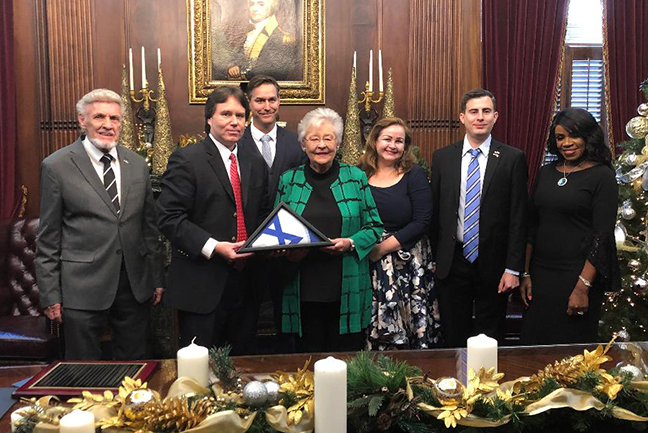 On Dec. 9, a delegation from the Alabama-Israel Task Force met with Alabama Governor Kay Ivey at her office in Montgomery to honor and celebrate the state’s historic resolution recognizing Jerusalem, and to convey gratitude from Israeli officials following a Jerusalem ceremony in November.

The resolution, SJR27, was passed by the Alabama Legislature in April, affirming and celebrating the move of the United States embassy to Jerusalem, and also declaring that Alabama does “unequivocally recognize Jerusalem as the eternal undivided capital of Israel.”

With that, Alabama became the first state to use the term “eternal undivided” in reference to Jerusalem, much as through a 1943 resolution, Alabama is regarded as the first state to call for the establishment of a Jewish homeland in the land of Israel.

A signing ceremony, attended by an unprecedented group of Christian and Jewish leaders from across the state, had been held on May 20 in the Old House Chamber in Montgomery, where the original 1943 resolution had been passed.

The ceremony on Nov. 8 in the Chagall State Hall at the Knesset in Jerusalem was held with a group from Calvary Assembly in the Decatur area. Eeki Elner, director of the Israel Leadership Institute in Sderot, led a program where AITF co-chair John Buhler, a trustee at Calvary Assembly, presented Speaker of the Knesset Yuli Edelstein a plaque with the text of SJR27, along with an official copy, and read a letter that Ivey had sent for the occasion.

In it, Ivey recalled Edelstein’s remarks when she was honored at the Alabama-Israel Leadership Gala in 2017. “Alabama remains committed to standing with Israel, and I will continue to work to keep our bond strong and look forward to future opportunities for even deeper ties, expanding cooperation, and new partnerships for the mutual benefit of our people,” she wrote.

Pastor George Sawyer of Calvary Assembly presented Edelstein with an encased Alabama flag, and Buhler concluded the presentation by saying “We love you. We stand with you. And we bear witness to the truth — Jerusalem is the eternal undivided capital of Israel.”

Before the Knesset ceremony, the Alabama delegation visited the embassy, taking a photo with the copy of the resolution that would soon be presented to Edelstein.

At the December ceremony, Ben Holtzman of Dothan presented Ivey with an encased Israeli flag. An Alabama native, Holtzman has served in the Israel Defense Forces and lived in Israel for many years. Ivey was also presented letters from Edelstein and Consul General Lior Haiat from the Israeli Consulate in Miami. Haiat recently left to become spokesman for Israel’s Foreign Ministry in Jerusalem.

Edelstein wrote that he “was moved” to receive a copy of the Alabama resolution, which “appreciates the profound and centuries-old connection between the Jewish people and Jerusalem.”

Laura King, AITF co-chair, presented Ivey with a plaque of SJR27, and Pastor Patrick Penn of The Dwelling Place in Huntsville presented her with a small jar of dirt from along the Jordan River where Joshua led the Israelites into the Promised Land. The jar was inscribed “Joshua 1:9” as an encouragement during difficult times.

Penn, who is on the advisory board of the International Christian Embassy Jerusalem and State Leadership for Christian Friends of Yad VaShem, then blessed Ivey and prayed for God’s blessings on the state of Alabama.