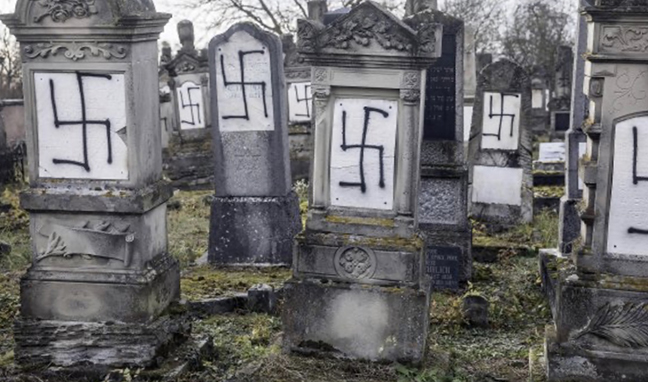 As anti-Semitism grows, more and more Jewish graves are being defaced. (ADL)

﻿Anti-Semitism — hostility and hatred toward Jews — seems to be growing by the week as reflected in news media accounts. The problem is particularly acute in France which, with its 550,000 Jews, is home to one of the world’s largest Jewish communities.

According to a recent report from the American Jewish Committee Paris, nearly 73 percent of the French public, and 72 percent of Jews, “consider antisemitism a problem that affects all of French society.”

Over the past 15 years, some of the most violent attacks against Jews have occurred in France.

Anti-Semitism in Europe is seen as coming from three sources: the ultra right, which has a long tradition of anti-Jewish hostility; the far left, which has an ardent antipathy toward Israel, the world’s only majority Jewish state; and the influx of radical Muslims into Europe, particularly into France.

Compounding this combustible triangle are two other significant factors: Europe’s long history of anti-Semitism, culminating in the Holocaust, making the continent a fertile breeding ground, and the growth of the Internet. Years ago, the U.S.-based Anti-Defamation League was warning about the growth and spread of anti-Semitism and other forms of hatred on the Internet.

About 15 years ago, I was present when then-Israeli prime minister Ariel Sharon urged the Jews of France to move to Israel, predicting that anti-Semitism would only grow in their home country. Sharon was criticized in some media and political circles for being alarmist. But clearly the Israeli-born prime minister, whose parents fled anti-Semitism and arrived in what would become Israel in the 1920s, was reading history correctly.

“To stay or leave” — the perpetual Jewish question — is again weighing on the minds of Jews in France and elsewhere. Thankfully, today there is a country for Jews to move to, especially those fleeing anti-Semitism, and aside from being America’s best ally in the Middle East, this is one more reason why Jews, Christians and others must work together to keep Israel strong.

Richard Friedman is associate editor of Israel InSight magazine. He has been to Israel 55 times.