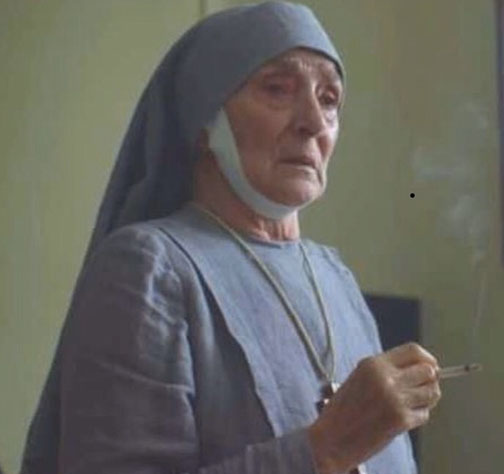 Princess Alice as she’s portrayed in the Netflix series “The Crown.”

Those who’ve watched the Netflix series “The Crown” likely have come to a deeper understanding of the British monarchy and, especially, its colorful characters, twists and turns, and the challenges it faces sustaining the monarchy in the modern era.

The series also has provided an array of thought-provoking and at times gripping history lessons, giving viewers a better understanding of the often-struggling characters at the center of these royal storms and sagas.

Among the more memorable people Netflix viewers get to meet is the late Princess Alice, the mother of Prince Philip, husband of Queen Elizabeth, and grandmother of Prince Charles, heir to the throne.

Princess Alice was back in the news recently as a visit to her Jerusalem grave by Prince Charles recalled her role in saving Jews during the Holocaust.

“I have long drawn inspiration from the selfless actions of my dear grandmother, Princess Alice of Greece, who in 1943, in Nazi-occupied Athens, saved a Jewish family by taking them into her home and hiding them,” Charles said during a visit to Israel. He was there as part of a delegation of world leaders who came to Israel for the World Holocaust Forum, a major Holocaust remembrance gathering that included commemoration of the 75th anniversary of the liberation of Auschwitz, the infamous Nazi death camp.

As the Associated Press noted in its report on Charles’ visit to Alice’s grave, “She is counted as one of the Righteous Among the Nations, an honor bestowed by Israel’s Yad Vashem Holocaust Memorial on non-Jews who risked their lives to save Jews during the Holocaust. Charles said that was a source of ‘immense pride’ for him and the royal family.”

Alice became a nun in 1928. “When the Nazis entered Athens in 1943, she sheltered three members of the Cohen family,” the AP story explained.

”Yad Vashem says the princess regularly visited with the family and wanted to learn more about their Jewish faith. At one point, when suspicious Gestapo officers came to the home to interview her, the princess used her deafness to avoid answering their questions, it said.”

Six million Jews — a third of the world’s Jewish population at the time — were killed by Hitler’s Nazis and their collaborators. Those who’ve been to Yad Vashem, which, among other things, traces the origin and devastation of the Holocaust — which was an effort to kill every Jew on the face of the earth — know that there are redemptive and uplifting moments during the experience. One of these is emerging from the complex and seeing a magnificent panorama of Jerusalem — testimony to the endurance of the Jewish people and the triumphant rebirth of the Jewish state.

Another one is the Garden of the Righteous. This is a tree-lined section of Yad Vashem dedicated to those, like Prince Alice, who risked their lives to save Jews from the Nazi death onslaught. Many of these heroes were motivated by their Christian faith, something the Jewish people should never lose sight of despite our difficult encounters with Christianity over the centuries, which, thankfully, are largely a thing of the past.

About 25 years ago, I took my son, who was then 10, to Israel for the first time. He had already learned about the Holocaust at his Jewish day school so we toured Yad Vashem. I remember sitting in the Garden of the Righteous when he asked me the question that countless others have asked about the Holocaust: How did God let this happen?

There are no easy answers and no one can answer this perplexing question with certainty. But what can be said is that people such as Princess Alice continue to shine like beacons as the Jewish people and the Jewish state remember them with gratitude, and their descendants — royal or otherwise — remember them with pride.