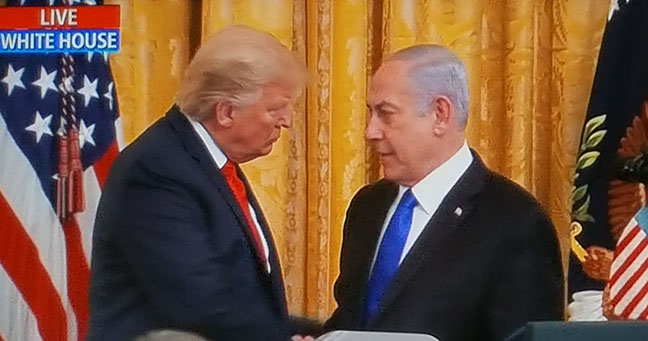 (Church4Israel) — President Donald Trump introduced his long-awaited Middle East Peace Plan for Israel and the Palestinians. The media, and enemies of Israel, will attempt to pull Evangelical support away from President Trump. Yes, it is a two-state solution. If you ONLY see the map and do not know what the plan is about, what is in it, you may be upset. But calm down, don’t panic, here is what it REALLY says and does.

“The role of the United States as a facilitator in this process has been to collect ideas from around the world, compile them, and propose a detailed set of recommendations that can realistically and appropriately solve the conflict… But only the Israelis and Palestinians themselves can make the decision to forge a lasting peace together. The final, specific details of the Israeli-Palestinian Peace Agreement, must be worked out directly between the parties.”

A Heart for Israel

President Trump picked the day after International Holocaust Remembrance Day, and the 75th anniversary of the liberation of the Auschwitz-Birkenau concentration camps, to announce the peace plan. The timing was not missed.

Let us be clear, President Trump recognizes the importance of Israeli sovereignty over the land as a Jewish state, and said in the announcement “Israel is a light unto the world. The hearts and history of our people are woven together. The land of Israel is an ancient home, a sacred place of worship and a solemn promise to the Jewish people, that we will never again repeat history’s darkest hour.”

He also said “Jerusalem cannot be divided, it is Israel’s capital” and “We have an obligation to humanity to get it done.”

The Arab World is with Israel and Supporting the Proposed Peace

In the Jan. 28 announcement of the Peace Plan Vision, the first words by President Trump defined the concept – and this is important to note – “Today Israel takes a big step toward peace. Young people across the Middle East are ready for a more hopeful future. And governments around the region are realizing that terrorism and Islamic extremism are everyone’s common enemy.”

Oman, Bahrain and the United Arab Emirates Ambassadors were at the ceremony for the announcement and participated in the development of the plan.

Israel Prime Minister Netanyahu has been building relations with Israel’s Arab neighbors over the last few years. They realize that Israel is NOT their enemy, but an economic powerhouse with innovations that they all need. Iran and Islamic extremism are their mutual enemies. This has been pushed by President Trump as he worked with Saudi Arabia to establish a center for combating terrorism.

The Arab nations have realized the lies of the Palestinians and are now siding with Israel.

The Basics of the VISION

We must understand what the Peace Plan is all about.

The “Deal of the Century” the “Middle East Peace Plan” is actually titled “PEACE TO PROSPERITY – A Vision to Improve the Lives of the Palestinian and Israeli People.”

“The principles set forth in this Vision for Peace, Prosperity and a Brighter Future (collectively, this “VISION”), are designed for the benefit of Palestinians, Israelis and the region as a whole. This Vision addresses today’s realities, and provides the Palestinians, who do not yet have a state, with a path to a dignified national life, respect, security, and economic opportunity and, at the same time, safeguards Israel’s security.

“A realistic solution would give the Palestinians all the power to govern themselves but not the powers to threaten Israel.”

The point being missed by everyone is that this is a vision, a long-term vision for the region, not an immediately implementable plan forced on Israel like has been done in the past. Lines have not been drawn. There are four-year and 10-year benchmarks required within the plan to move forward. The map within the vision is only a suggestion of a framework for the Palestinians and Israelis to start negotiations. The map is called in the document a “Conceptual Map.”

In the announcement of the vision, Trump referenced a meeting he had with Palestinian President Mahmoud Abbas after his election.  After that visit, he was “saddened by the fate of the Palestinian people. They deserve a far better life. They deserve the chance to achieve their extraordinary potential. Palestinians have been trapped in a cycle of poverty, terrorism, and violence, exploited by those seeking to use them as pawns to advance terrorism and extremism.”

And that, my friends, is the basis for this plan, the vision. President Trump is all about economic development and building prosperity for people. He wants the Palestinian people to change their view, to no longer be victims of the “perpetual refugee” sham. He wants them to have hope, to know they don’t have to be always trapped in a “refugee label” but instead thrive and have hope for the future.

Ending Terrorism through Hope and Prosperity

With the hope of a future comes the end of terrorism and hate. That is the fundamental goal of Trump’s “Vision to Improve the Lives of the Palestinian and Israeli People.”

“Gaza and the West Bank are politically divided. Gaza is run by Hamas, a terror organization that has fired thousands of rockets at Israel and murdered hundreds of Israelis. In the West Bank, the Palestinian Authority is plagued by failed institutions and endemic corruption. Its laws incentivize terrorism and Palestinian Authority controlled media and schools promote a culture of incitement. It is because of the lack of accountability and bad governance that billions of dollars have been squandered and investment is unable to flow into these areas to allow the Palestinians to thrive. The Palestinians deserve a better future and this Vision can help them achieve that future. Palestinian leaders must embrace peace by recognizing Israel as the Jewish state, rejecting terrorism in all its forms.”

One of the first mandates in the peace plan is that Gaza must be disarmed, demilitarized, and all terror groups removed, including Hamas and Palestinian Islamic Jihad. It also requires the Palestinian Authority to stop paying the families of terrorists and stop promoting and training terrorism against Jews.

NO, NO,  Thousand times NO! – Palestinian President Abbas

The Palestinian Authority has already REJECTED the plan. Why? Because the Vision mandates first that the Palestinians recognize Israel’s RIGHT TO EXIST.

“Palestinian leaders must embrace peace by recognizing Israel as the Jewish state, rejecting terrorism in all its forms.”

This is a deal-breaker for the leadership that trains schoolchildren to hate and kill Jews. This is unacceptable to Palestinians that have been told for generations that they have a “right to return” to all of Israel, that with persistence, Israel will be destroyed, and the land is all for them.

Hamas, the leadership in Gaza, is supported and armed by Iran. They are rioting over the proposed plan. Even as it offers them more land and freedom and huge economic development. I don’t believe Hamas will allow the citizens of Gaza to see what is in the plan.

The PA is disturbed by Trump. He has long made it clear in words and deed where he stands with Israel. This has been a far departure from the Obama and other past administrations.

Trump, in building up to this Peace Plan VISION, drastically reduced money to the PA and demanded they stop paying the families of terrorists. He closed the consulate of the U.S State Department that was secretly serving and funding the Palestinian Authority outside the purview of the official U.S. Embassy to Israel.

He pressured the United Nations to stop funding terrorism via the PA and named Nikki Haley as Ambassador to the U.N. She quickly “kicked butt” in the U.N. and made a great impact on reducing the constant U.N. attacks on Israel. And of course, he announced U.S. policy recognizing an undivided Jerusalem as the capital of the Jewish State and moved the U.S. Embassy there.

President Trump also has taken a strong stand against the Boycott, Divest and Sanction movement and named Hamas as a terrorist organization that uses human shields.

As Israel PM Netanyahu said at the announcement of the plan; “President Trump has done more for the State of Israel than any president in history.”

Yes, the Vision for Peace is a conceptual framework to start negotiations. The business community in the Palestinian territories is ready for normalized relations with the world. They want hope for their children, and generations to come, to not be labeled “refugees,” victims of oppression that require handouts and foreign aid. The Palestinian people that you do not see in Main Stream Media want their businesses, lives and families to prosper.

The Palestinian communities in ancient Judea and Samaria are in what the world calls the “West Bank.” I have spent time there and have seen first-hand the Jewish and Muslim families and businesses working together, doing business together, frequenting each other’s shops and talking like neighbors. It is the political leadership of the Palestinians that oppresses them, the anti-Israel, anti-Semitic political world around them that promotes hate and needs to change. It does not reflect the truth on the ground. The people deserve peace.

Do not listen to the anti-Trump, anti-Netanyahu Media

Those who do not read the Vision, or listen to the President’s actual words, or look at everything the president has done over the last three years to build up to this moment, those people will not see the big picture or “get it.”

Instead, they will only look at the map, and scream “He is dividing the land!”

Let’s not go there. Let us look at this with knowledge, not emotion, look at this strategically, seeing how it solves short term problems with long term vision.

This Vision will reveal the truth to the world when the PA refuses to even acknowledge it or negotiate. Through prayer and persistence, eventually, this Vision may bring peace. But we need to wait and see.

Read it Yourself and Pray for Peace

Here is a link to the “PEACE TO PROSPERITY – A Vision to Improve the Lives of the Palestinian and Israeli People.” It’s only 80 pages and well laid out. I don’t agree with all of it, I personally don’t think Israel should give up one morsel of land, but I do understand the strategy.

I pray for the Palestinian people, that they will turn from terrorism, rise up against the terrorist leadership in both the PA and Gaza, and strive for peace. I hope you will pray for them too.

The founder of Church4Israel, Robin Rowan is a recipient of the “Secretary of Defense Medal for the Global War on Terrorism.” After many years in government oversight for U.S. Inspectors Generals, Rowan conducts extensive research and mandates truth over politics. She is a political activist for the US- Israel relationship, serving as lay lobbying leader and six years on the National Council of the American Israel Public Affairs Committee (Views expressed do not reflect views of AIPAC). An ordained minister, she speaks to churches of all denominations on Israel and the importance of the Christian advocacy and engagement in politics.