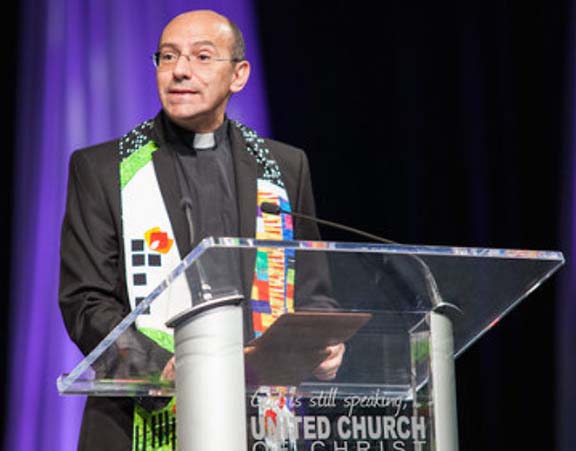 At the United Church of Christ General Synod in Cleveland in 2017, Rev. Mitri Raheb, a Palestinian Christian and pastor of the evangelical Lutheran Church in Jordan and the Holy Land, called the UCC’s resolution to divest from Israel “a strong signal that [Palestinians] are not alone, and that there are churches who still dare to speak truth to power and stand with the oppressed.” Credit: United Church of Christ/Flickr.

(JNS) — The Church of England has once again been performing the ritual that has been enacted by progressive Protestant churches in the West for decades: liberal self-flagellation.

The Archbishop of Canterbury, Justin Welby, said this week that he was ashamed of the Anglican attitude to black people, and declared that the church was “deeply, institutionally racist.”

So ashamed was he of having previously been unaware of his “white privileges and advantages,” he even compared the behavior of the church to the way the German people allowed the Nazis to persecute the Jews. “I think they didn’t really notice; they just took it as normal.”

Rather than make such a deeply inappropriate comparison in a desperate attempt to appease the gods of identity politics, the head of the Anglican church would have done better to express shame for the way so many liberal Christians mouth penitential pieties about the Jews murdered in the Holocaust while “taking as normal” murderous libels against living Jews in the State of Israel.

Christians are arguably the most committed supporters of Israel in the world. At the same time, different kinds of Christians are among the Jews’ worst enemies.

In America, the ones who defend Israel so passionately are (mostly) the “red state” evangelicals. It is these people in their millions, not the so-called and vastly over-hyped Jewish lobby, who make America so pro-Israel.

Many American Jews, however, believe these Christians are anti-Semites. This is because some want to convert the Jews to Christianity and believe that this will happen at the “end of days.”

None of that, though, poses a serious danger to Jewish interests. A far greater threat is posed by those Christians who appear more reasonable because they sound like secular liberals.

Next month, the executive committee of the World Council of Churches is due to elect a new general secretary. One of the two candidates is Dr. Jerry Pillay, a member of South Africa’s United Presbyterian Church who has urged support for the BDS movement against Israel “for the sake of just peace.”

The WCC has played a key role in turning much of the world against Israel. Through its “liberation theology,” it has for decades infused liberal churches with neo-Marxist, anti-capitalist, anti-West attitudes — thus placing a virtual halo over the anti-Semitism of the left.

In Britain, the Church of England and other liberal denominations are institutionally hostile to Israel. Such churches, along with immensely influential Christian NGOs such as Christian Aid, Christ at the Checkpoint or KAIROS, disseminate boiler-plate distortions and falsehoods that demonize Israel and sanitize Palestinian-Arab aggression.

In the United States, a number of churches — most notably the United Church of Christ and the Presbyterian Church USA — have passed BDS resolutions against Israel.

According to Dexter Van Zile, the Christian analyst with the Committee for Accuracy in Middle East Reporting in America, the “Never Again” coalition of liberal Protestant denominations created after the Holocaust has attacked the primary victims of the Holocaust with a flood of dishonest propaganda.

Its message, he has written, is that “Israeli Jews abuse the rights accorded to them as a sovereign people in the Middle East,” and that “by exercising undue influence in the democracies where they live, Diaspora Jews help Israel get away with its crimes.”

“It’s a ‘cleaner’ version of ‘The Protocols of the Elders of Zion’,” says Van Zile, “but the implications are just as demonic.”

While many Christians who subscribe to such views are just going with the flow of the prevalent (and unchallenged) narrative about the Middle East, that narrative’s roots lie in a toxic combination of Marxism, Palestinianism and theological Christian anti-Semitism.

As the Christian historian Paul Merkley has chronicled, the WCC played a key role in bringing about the 2001 anti-Zionist hate-fest in Durban, South Africa, a few days before 9/11, when representatives attending the U.N. Conference on Racism, Racial Discrimination, Xenophobia and Related Intolerance demanded that the United Nations denounce Israel for “systematic perpetration of racist crimes, including war crimes, acts of genocide and ethnic cleansing.”

Merkley wrote: “This Durban Declaration was achieved in large part by the active lobbying of the World Council of Churches serving as brokers between the Muslim states and Western opinion in August 2001.

“Today, the Durban Declaration serves as the source of the mottos with which respectable people in our part of the world shape their campaigns to deprive Israel of her right-to-life. WCC statements on this theme are parroted by the official journals and newsletters of the major Protestant denominations in the United States and elsewhere around the world.”

The deepest root of the church’s hostility towards Israel lies in the resurrection of the previously discredited doctrine of “replacement theology,” also known as “supersessionism.”

This doctrine, which holds that because the Jews denied the divinity of Jesus they were stripped of God’s favor so that Christians became the “new Israel” while the Jews were damned, was the source of centuries of murderous Jew-hatred until the Holocaust drove it underground.

It was given new life by Palestinian Christian liberation theology, which states falsely that the Palestinian Arabs were the original possessors of the land of Israel. It thus gives the Palestinian claim to the land the status of supposedly holy Christian writ, turning Israel into an ungodly interloper and her defenders into the enemies of God.

This poisonous and lethal fiction is pumped out by the Sabeel Ecumenical Liberation Theology Centre in Jerusalem, run by Father Naim Ateek. He is a close friend of many senior Anglican bishops; while Sabeel, used as a major resource by Anglican clergy, aid agencies and pilgrimage companies, is a crucial source of systematic, theologically based lies and libels about Israel.

Meanwhile, Christianity is under actual assault from radical Islam. According to the Open Doors World Watch List 2020, an annual report that ranks the top 50 countries where Christians are most persecuted for their faith around the world, 260 million Christians are suffering high to severe levels of persecution.

“Islamic oppression” was the chief source of persecution faced by Christians in seven of the 10 worst nations, while 38 of the 50 on the list were either Muslim-majority or had a sizable Muslim population.

Yet on this worldwide Christian persecution, the liberal churches are all but silent. Israel is the only country in the Middle East where Christians are safe. Yet these churches dump on Israel, not only thus assisting the mortal threat it faces from Palestinian Muslims, but ignoring the threat those people pose to the church itself.

In a recent address in the Al-Aqsa mosque in Jerusalem, a Palestinian researcher Ahmad Al-Khatwani raved that an Islamic state of Palestine would not only replace Israel, but its army would also “conquer Rome.” It was an “Islamic cause” which should be viewed “as a conflict between Muslims and Jews, Muslims and Crusaders.”

Christianity lost its way a long time ago. Losing their faith, many Christian churches turned instead to social and political activism, liberation theology and the radical Marxist analysis of the World Council of Churches.

Those progressive churches have denied their Jewish parent. Embracing instead their Islamist assassin, they are in the forefront of the charge against Israel. In the process, however, with their congregations dwindling they are destroying themselves — thus weakening even further the society for which they once provided the now degraded moral core. 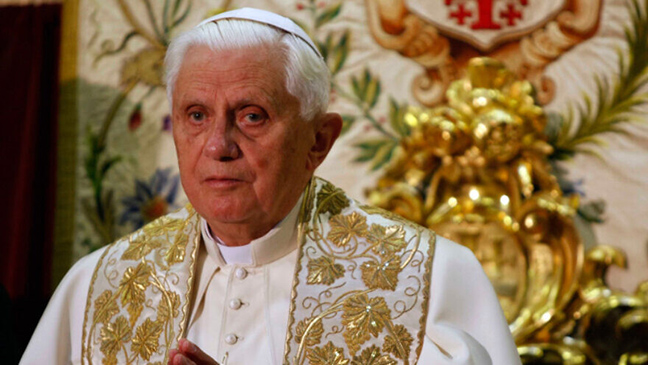