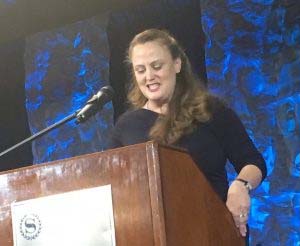 Rev. Dr. Mae Cannon, executive director of Churches for Middle East Peace, speaks at the Christ at the Checkpoint Conference in Oklahoma in 2018. (Photo by Dexter Van Zile)

(CAMERA) — Founded in 1984, Churches for Middle East Peace is a lobby organization supported by approximately 30 churches and church-related organizations in the United States.

The organization, which works to influence Congress, the White House and the State Department regarding American foreign policy in the Middle East, sends alerts to its supporters who in turn are asked to contact government officials about their concerns.

The churches that support CMEP, particularly mainline Protestant churches, sometimes broadcast these alerts to their members. In its messaging about the Arab-Israeli conflict, CMEP mainly targets Israel and the U.S. with criticism and demands while remaining largely silent about the misdeeds of the Palestinian Authority, which governs the West Bank; and Hamas, which controls the Gaza Strip.

With its one-sided testimony about the conflict, CMEP has served as a de facto replacement for the PLO’s diplomatic mission in Washington that was shut down by the Trump Administration in 2018.

During a recent conference call organized by the Global Immersion Project, another so-called “peace” organization, Cannon said that her organization would call on its supporters to declare that they are opposed to the Trump peace plan. On its website, CMEP declared that the “inevitable result” of the plan “will be more human rights abuses, trauma, and violence.” With statements like this, CMEP is giving the Palestinian Authority the cover it needs to refuse to negotiate a final settlement, something it has failed to do in good faith for years.

It’s a strange thing to see from an organization led by a “peace” activist who declared in 2018, “Throwing mud at peace negotiations does not bring peace closer. It just adds yet more burdens to negotiate for peace, and more pretext for those opposed to peace.”

Who is throwing mud now?

Here are a few questions that lawmakers should ask CMEP executive director Mae Cannon and the activists she leads on their next visit to Capitol Hill.

Background: In a statement about the Trump Plan, CMEP laments that the plan “asks Palestinians to ‘meet the challenges of peaceful coexistence,’ including inter alia [among other things] establishing Palestinian national laws on human rights, recognizing Israel as the Jewish State, dismantling Hamas, demilitarizing Gaza, and halting financial compensation to terrorists.”

These expectations, CMEP declares, are “all deeply subjective, and all subject to Israel and the U.S. deciding whether what Palestinians did was sufficient to meet the ‘challenges’.”

These expectations were, in one form or another, included in the Oslo Accords signed in the early 1990s, and no one seemed to have any problem with the Palestinians agreeing to them back then. Why is there a problem now? If they are subjective demands now, why weren’t they in the 1990s?

Why is it unreasonable to hold the Palestinians accountable for the promises they agree to?

Does CMEP honestly think that the Palestinians are entitled to money from Western countries without strings attached? Do CMEP activists honestly think that Western donors should donate money to the PA in light of the Palestinian Authority’s use of donor funds to pay the families of terrorists who have killed Israeli civilians? Why is it so unreasonable to make future pay-outs to Palestinians contingent on their meeting the expectations their leaders agreed to during the Oslo Accords? Does CMEP think statehood should be accorded to the Palestinians without reasonable assurances that they will live in peace with the Jewish state right next door?

Can CMEP and other Christian “peace” and “justice” organizations support Palestinian statehood and human rights at the same time?

Background: Palestinian nationalism has, for most of its history, been based on an outright rejection of Jewish self-determination. There have been some gestures, fleeting and later contradicted, of acknowledging the reality (not the legitimacy) of Israel’s existence. Instead of working to convince people of the need to accept Israel’s existence, Palestinian elites continue to use some very ugly antisemitic tropes to unite rank-and-file Palestinians and distract them from the catastrophic failure of both the Palestinian Authority and Hamas to provide for the material welfare of the people they govern.

These tropes portray Jews as unfit to exercise the right of self-determination. They portray Jews, by their continued existence and sovereignty, as a threat to the welfare of Arabs and Muslims worldwide.

In sum, the Palestinians have demanded the right of self-determination for themselves while refusing it to Jews living in Israel.

And despite all this, CMEP and its executive director Mae Cannon have declared it unreasonable to expect the Palestinians to affirm the legitimacy of Jewish self-determination. Given that Palestinian nationalism is predicated on denying Jews their rights to self-determination, how can CMEP and other Christian “peace” and “justice” organizations logically claim to support human rights and Palestinian statehood at the same time?

What is the central idea that motivates CMEP activism: human rights or Palestinian nationalism?

If it is human rights, why have we seen so little effort on the part of CMEP to convince Hamas and the Palestinian Authority to change their ways by affirming the Jewish right to self-determination and refraining from abusing the people they claim to be liberating?

Human Rights and the Cairo Declaration

Is it reasonable, responsible, and ethical for CMEP to promote the creation of another Islamic state that rejects call for equality enunciated in the Universal Declaration of Human Rights passed by the United Nations in 1948? More to the point, what is CMEP’s response to the Cairo Declaration?

The latter denies the applicability of the UDHR by stating that the CD’s signatories affirm human rights to the extent that they do not contradict Muslim doctrine, which historically has denied equal rights before the law for Muslims and non-Muslims, affirmed male superiority, and legitimized slavery, which astonishingly enough is still practiced today in some Muslim countries. (This has particular resonance for the Holy Land because the draft Palestinian constitution declares that “The principles of Islamic Shari’a shall be the main source of legislation” for the future state.)

Is it appropriate for a “peace” and “justice” organization to cooperate — even tangentially — with the diplomatic agenda of countries that have signed the Cairo Declaration? Should signatories of the Cairo Declaration be allowed to serve on the U.N. Human Rights Council or file human rights complaints, given their stated opposition to these rights?

Should the non-Islamic signatories of the UDHR take these complaints seriously?

The main challenge to Churches for Middle East Peace and other Christian peacemakers is this: Can Christian peacemakers work in good conscience to achieve the rights of self-determination of Palestinians in the West Bank and Gaza when their leaders have refused to acknowledge the same right of Jews living in Israel?