Israel needs a “national responsibility” government in these tumultuous times 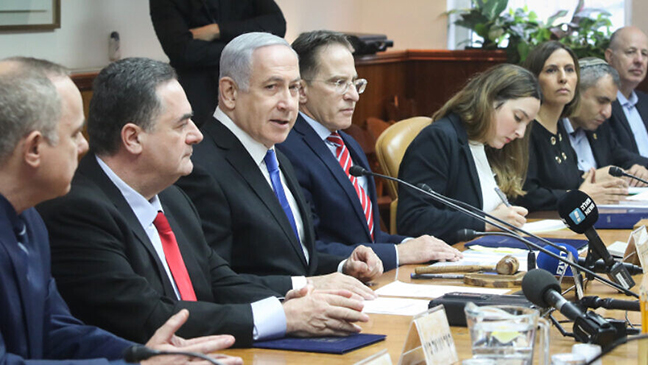 (JNS) — On March 15, after a year of political deadlock, the eight parties that would be sworn into the Knesset the following day submitted to Israeli President Reuven Rivlin their recommendations for who should be tasked with assembling a government. Sixty-one out of the Knesset’s 120 members recommended challenger Benny Gantz of the Blue and White Party as their preferred candidate for prime minister, and Rivlin has announced that he will give Gantz the first opportunity to form a government.

However, while incumbent Benjamin Netanyahu of the ruling Likud Party received only 58 recommendations, Israel’s complicated political math does not add up to a majority coalition for Gantz. The chances that he will form a government are slim at best.

Among Gantz’s supporters are seven MKs from the secular yet hawkish Yisrael Beiteinu Party led by Avigdor Lieberman, and the 15 MKs of the Joint List of Arab parties — a collective of smaller, ideologically-disparate Arab parties that conveniently share a distaste for Netanyahu along with a fundamental opposition to the existence of Israel as a Jewish state. Lieberman has pledged not to join the Arab parties in any government, as have key senior members of Gantz’s own Blue and White Party.

By negotiating with the Joint List, Gantz is breaking his major and oft-stated campaign promise not to form a majority government including the Arab parties or to rely on their external support for a minority government.

Without the Joint List’s 15 seats (the Arab parties have never joined any Israeli government — left, right or otherwise), Gantz’s bloc of supporters sits at only 46, 12 seats fewer than Netanyahu’s loyal bloc of 58. By contrast, Netanyahu needs only three additional MKs to join him to form a parliamentary majority.

Gantz’s only hope to establish a government, therefore, is to for the first time in Israel’s history create a minority government backed by the Joint List — one comprising closer to a third of the parliament than a majority. Such an unstable government, backed from without by self-proclaimed anti-Zionists, would represent a strategic danger to the State of Israel in normal times, let alone amid a national crisis.

And Israel and the world are now facing an unprecedented crisis. Thus far the Jewish State is weathering the COVID-19 pandemic reasonably well, with relatively few cases and no deaths. Yet the government is not operating at full capacity. For over a year, Israel’s ministries have been operating without budgets. To deal with the current crisis, new budget allocations must be made, and extraordinary legislative steps may need to be taken — by functioning Knesset committees — to immediately bolster Israel’s overstretched health system and stabilize the economy.

Netanyahu has offered Gantz two options for joining a unity government. The first is an emergency six-month government in which Netanyahu remains prime minister, Gantz is named deputy prime minister and the two major parties split ministries proportionally. Netanyahu would not be able to fire any Blue and White ministers, while Blue and White would agree not to vote against the government in any no-confidence motions. Essentially, new elections would be delayed for six months, while a functioning government — albeit a temporary one — could pass budgets, make critical decisions in parliamentary committees and keep ministries functioning.

In such a scenario, the electorate would gain some time to recover following three sets of national elections in less than 12 months. Plus, in the interests of national safety, it may be unwise to bring people out to the polls during the coronavirus outbreak. The March 2 elections, too, posed a major national safety risk and most likely should have been avoided.

And perhaps in six months’ time, Israelis might have gained some additional insight or perspective, whether on Netanyahu’s now-delayed corruption trials or Gantz’s performance for the first time in a government, that would help voters break the current political deadlock.

Yet offering Gantz the chance to serve as prime minister after immediately breaking his campaign promise not to form a government with support from the Joint List seems like an undeserved political lifeline.

If and when Netanyahu is no longer capable of serving as prime minister, whether that is in another four months, another four years or longer, the successor to Israel’s longest-serving prime minister should come from the political right, where the overwhelming majority of Israeli voters lie. It should not the leader of a center-left party whose primary allies are far-left and anti-Zionist parties.

Unity is not required

And as more than three MKs staunchly oppose the formation of a left-wing minority government backed from without by the Joint List, those same MKs should draw the conclusion that like it or not, Netanyahu significantly outscored his opponents at the polls — even in the face of an impending corruption trial.

Since Zionist voters have stated clearly that they prefer for Netanyahu to run the country as opposed to Gantz, for the good of the nation, those MKs should simply do their jobs and join a parliamentary majority led by Netanyahu. The challenges and opportunities of the moment require national responsibility, and a national responsibility government.

A national responsibility government should have four primary agenda items. The first is to manage the coronavirus crisis, to limit the spread of the disease and ensure the best care with the highest possible recovery rates for those who contract it. For Israel, the startup nation and technology, research and development hub, this task has both domestic and international implications.

For the past several weeks, Netanyahu has been at the head of Israel’s national efforts to combat the COVID-19 pandemic. Under his direction, Israel has essentially sealed its borders, and banned all public gatherings, including closing all the schools. Netanyahu has received global and domestic praise, even from his detractors, for his handling of the crisis, having quickly established himself and the State of Israel as a global leader in the fight to contain the outbreak.

Switching to an untested leader in a time of crisis is a risky proposition at best, and negligent at worst. Not only should Netanyahu continue to lead Israel against the threats and effects of COVID-19, he should do so with the backing of a fully-functioning government.

The second agenda item should be to gird the economy against the damage now being inflicted by the pandemic, and to take aggressive steps as the virus clears to recover as quickly and efficiently as possible. A fully functioning parliament and ministries are necessary to account for the fiscal needs of the government, as well as large and small businesses, and private individuals, who are all being severely impacted by the country’s partial economic shutdown.

This includes passing multiyear budgets for each ministry, so that if Israel continues to find itself in a protracted political standoff, even a transitional government will have the capacity to ensure key ministries are functioning properly.

Such a fiscally-minded national responsibility government should similarly implement the six economic reforms proposed by Netanyahu and former Jerusalem mayor and finance minister candidate Nir Barkat. These reforms include: massive investments in the healthcare system; lowering the costs of housing and food prices; investing in infrastructure and commerce in the Negev, Galilee and Judea and Samaria; and investing in Israel’s small businesses, particularly within the start-up and technology sectors.

Third, the government should focus on the application of sovereignty to key territories in Judea and Samaria (commonly known as the West Bank), including the strategic Jordan Valley, as well as every Jewish community and outpost — a key initial component of the Trump administration’s “Peace to Prosperity” proposal.

The plan encourages Israel to apply sovereignty with full U.S. backing at the very outset of a bilateral negotiations process, while simultaneously demanding that Palestinians meet key qualifiers including the cessation of terror incitement and financing, implementation of democratic and economic transparency, and full demilitarization, as prerequisites for coming to the negotiating table.

Netanyahu, who had significant input into the direction and details of the plan, is fully committed to its implementation. Gantz, on the other hand, while offering tepid support for the plan to U.S. President Donald Trump, has multiple senior advisers who have publicly compared Trump to Adolf Hitler. More importantly, some of the parties who support him for prime minister, including the far-left Labor-Meretz alliance and the Joint List, have stated their firm opposition to the plan and to the application of Israeli sovereignty anywhere within the disputed territories. Joint List leader Ayman Odeh has claimed that Gantz assured him that he would not apply sovereignty over parts of the West Bank, in return for his support.

And just one week after breaking his campaign promise not to enlist the support of the Joint List to form a government, it is more than reasonable to assume Gantz would not immediately implement Israeli sovereignty as prime minister, even if he assured President Trump that he would.

The offer presently on the table from the Trump administration represents a once-in-a-generation opportunity that will certainly evaporate should Trump’s opponents win in the upcoming November U.S. elections.

Lastly, a national responsibility government must continue to manage the vast security threats posed by Iran, Syria, Hezbollah, Hamas and Palestinian Islamic Jihad in Gaza, while maintaining security cooperation with the Palestinian Authority, Egypt and Jordan.

Protecting Israel against COVID-19, strengthening the economy, applying sovereignty in Judea and Samaria and protecting Israel against multiple security threats are lofty but attainable goals. Successfully addressing this limited set of key concerns will put Israel in a much stronger place to deal with the numerous other social, economic and religious-fabric issues it faces.

After a year-long political impasse, elected MKs must recognize the reality of the election results and view them in light of the immediate challenges and opportunities facing the Jewish state. This moment calls for national responsibility, and for the creation of a functioning, Zionist parliamentary majority.

Alex Traiman is the managing director and Jerusalem Bureau Chief of the Jewish News Syndicate.