In Spite of the Naysayers: How Israel is directly helping Palestinian Arabs during the coronavirus crisis 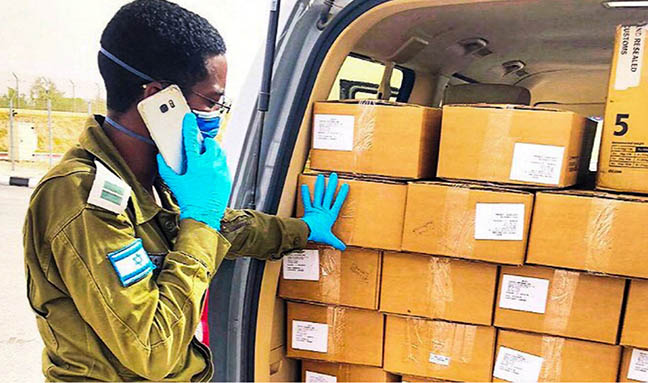 On March 31, a large shipment of medical equipment and medicine for the Palestinian healthcare system was transferred from Jordan through the Allenby Bridge, through Israel’s Coordination of Government Activities in the Territories. Similar shipments to Gaza are being facilitated through the Erez crossing. Photo courtesy COGAT.

Two recent articles of mine triggered separate, similar and parallel feedback. In both cases, the comments were cloaked in concern for “the Palestinians,” but were cover for denigrating Israel. In both cases, the articles I wrote were humanitarian and not political in nature. One article was about Israel’s response to Coronavirus and the other was related to tips on being isolated, from Natan Sharansky, a prominent Israeli leader and former Soviet political prisoner. So it was surprising that something political would come up at all.

Since this came up in the context of humanitarian topics, I want to address it, but with some (editorial) ground rules by way of full transparency. First, I don’t refer to them as “Palestinians” but rather as “Palestinian Arabs.” My Jewish father was born in British Mandatory “Palestine.” He was a Palestinian. Then, and until 1948 when Israel declared independence, the term “Palestinian” referred to the Jewish residents of Mandatory Palestine.

It’s important to note Palestine was never a country of its own. I often wonder if Israel’s leaders then had chosen the name “Palestine,” what would today’s “Palestinians” be. Israelis?

Had the Arabs accepted peace and two states in 1947, or at any time since, they could have had a separate country and called it “Palestine” if they wanted, and referred to themselves as “Palestinians.” But that national title only became in vogue following, in response to, and to delegitimize Israel’s existence.

In fact, it was only in the mid-1960s that the terrorist Palestine Liberation Organization ascribed any kind of national aspirations to the Arab population of Mandatory Palestine, to delegitimize and threaten Israel’s very existence. Even then, they knew that the nationality they had invented had no historical roots.

Having said that, I do recognize that there is an Arab population in what was once Mandatory Palestine, that now identifies itself as a unique ethnic and national group. Many of these are Jordanian because Jordan was also part of Mandatory Palestine until 1921. Many of these are Israeli Arabs, full equal citizens, representing more than 20 percent of Israel’s 9 million people. And a few million are “Palestinian Arabs” living in Gaza and biblical Judea and Samaria (the West Bank), most of whom live under the autonomous Palestinian Authority. It’s the latter group about which I will refer.

Now, as to the question, “What has Israel has done to help the Palestinian Arabs?” The answer is quite a lot. Most Israelis agree that we should help them. Interstingly, while many Palestinian Arabs blame Israel for all their problems, now many see the benefit and advantage in coordinating with Israel.

There have been and continue to be high level inter-governmental contacts between Israel and the PA at ministerial levels. Many Palestinian Arab workers in Israel have been offered shelter in Israeli hotels, so they don’t get stuck in the Palestinian Authority without work. Some are being treated in Israeli hospitals. Israel is using its resources to provide and facilitate transfer of medical supplies, dozens of truckloads a day. This includes to Gaza, which is controlled by Hamas, a terror group that goes to all ends to fight Israel, and uses its resources to kill and maim Israelis while holding Israeli hostages.

While not proven, yet, within a day or two of revealing that Israel’s Mossad was responsible for acquiring tons of medical supplies and testing kits, suddenly the Palestinian Authority had its own abundant supply. This is not a coincidence.

My organization, the Genesis 123 Foundation, is raising money for food for some of the poorest families in Jerusalem who have at-risk and special-needs children, including Palestinian Arabs. It’s not just our priority, but a priority of the Jerusalem municipality. On an unrelated note, we also provide support for Christian Arabs, some of whom are Palestinian and some of whom are Israeli Arabs, living among often hostile Muslim populations.

To suggest that Israel does not provide abundant help all the time, as well as now during its own national crisis with the Coronavirus, is not accurate or honest.

The detractors who responded to and confronted me insisted that Israel has a moral responsibility because “they are caged behind walls” like “animals behind an electric fence,” and they are “desperate to make a living and survive.” No good anti-Israel diatribe would be complete without allegations that Israel treats “the Palestinians” like the Nazis treated the Jews. These accusations are nonsense. I live among Palestinian Arabs with whom we share the roads, and among whom we work and shop.

Israel coordinates carefully with the PA for a variety of humanitarian and security needs. As a sovereign nation, Israel does not have any direct obligation to provide for the PA or Palestinian Arabs who are not citizens. It does so out of good will and good mutual interests.

I questioned my confronters as to why they expect Israel to provide anything, just because of geographic proximity, and not have the same expectation of Jordan or Egypt. Even the PA in Ramallah withholds support for their own people in Gaza because of strife between Hamas and the PLO. For that matter, why is it that the rest of the Arab world has more or less abandoned the PA, and Iran and Turkey are all too happy to provide money and weapons to fight us, but not to help them build a better society for themselves? This is only partly rhetorical.

But why Israel, alone, indeed? And why uniquely single out, attack and blame Israel? It is not only inaccurate but in fact racist to not have expectations that the Palestinian Arabs use billions they receive from the United Nations, European Union and others to build infrastructure to improve their society, much less blame Israel for the lack of that happening. Doing so is a double standard that holds them to a lower standard than the rest of the world.

I am proud of what we do. Yet in documenting all of this with links to credible sources (as in this article) one of the detractors in particular wrote these off as “propaganda.” More like inconvenient truths.

One of my detractors raised the ante of audacity writing, “When the so called “rockets” were shot (in 2014), people went into shelters on the Israel side with food and comfort. The Palestinians had nothing.” Living here then I noted that was the summer that Palestinian Arab terrorists kidnapped and murdered three Israeli teens in cold blood. That summer three “so called rockets” from Gaza made it scores of miles to my own community, one landing literally across the valley, shaking my house both from the explosion and its echo.

I noted that the reason Gazans don’t have protection is because they have been held hostage by Hamas, and abused by the PA, who use their own people as human shields and abscond with tens of millions of dollars to build terrorist tunnels and weapons to attack us, rather than homes and hospitals and schools.

As far as Israel aiding the Palestinian Arabs, I noted that one of the best things Israel did for them is to build the Iron Dome, which protects us from their rockets. God forbid, a Hamas rocket were to hit a kindergarten, hospital or apartment building in Israel and there were many casualties, Israel’s response would be severe, and lives on both sides would be lost.

I have mixed feelings as to what obligation Israel has, and what our response ought to be. What aid and resources should Israel commit to protect a people who are openly hostile to us, who incite and celebrate terror, and who don’t recognize our right to exist? With a son in the army protecting us, how many soldiers should be employed in the service of aiding the PA and its citizens?

I don’t have all the answers on this, or on anything. But I am proud as an Israeli that we do what we do, even if we are held to a higher standard. Nevertheless, those who want to find fault with Israel will do so regardless of the facts.